This is the Graceful Family Episode 1: Recap & Review. Wan-Soo drives in the evening, and the police cars chase him. He tells someone that he is drunk. Je-Kook guides Wan-Soo to drive to the safe area through the CCTV, and the police asks Wan-Soo to get out of his car. 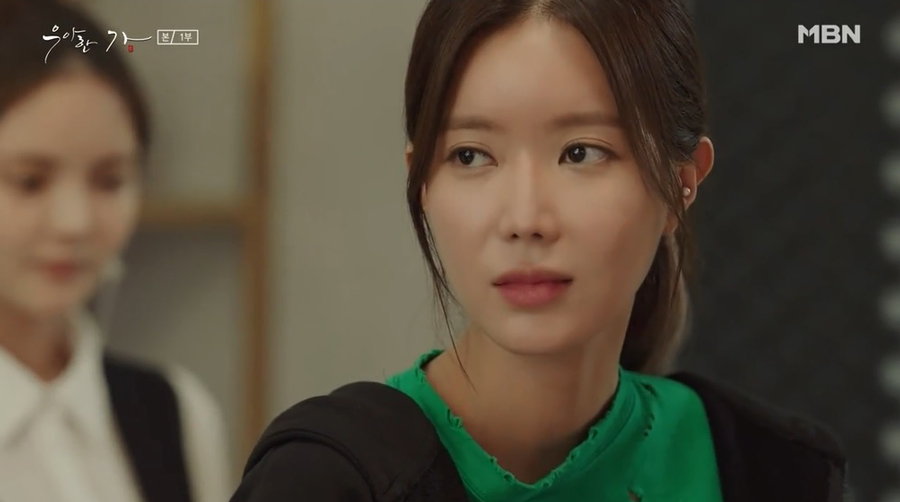 Note: From here on out there are specific plot spoilers for Graceful Family Episode 1.

Sang-Won arrives, and the police forgives Wan-Soo after he had a talk with someone over the phone. Wan-Soo is send to the hospital, and we learn that he is the eldest heir of MC Group. Je-Kook doesn’t find the kid, and her woman finds out that the kid slipped out the class and got in the internet cafe. She asks Mr. Kwon to get the kid.

The kid is playing game in the internet cafe, and the two thugs borrow money from him but refuse to pay him back. So the kids makes the thug trip. The thugs want to beat the kid, but Mr. Kwon stops them. We learn that the kid is Seo-Jin, who is the youngest heir of MC Group.

The woman is interviewing the man, and she shows her earring to him. He thinks she seduced him, but she wants to sue him for sexual harassment. Kyung-A shows up and thinks the woman wants to get the man as her boyfriend. She points out that the woman’s jewelry is secondhand. The man takes a look at Kyung-A’s necklace and thinks it’s very nice, and he is Wan-Joon, MC Group’s second heir.

Young-Seo, the chairman’s second wife, who just slept with the young man. She tells someone that she is enjoying the river breeze. Je-Kook looks into the man who stays with Young-Seo, and finds out that In-Ho has a lot of debt. Young-Seo asks her man to catch In-Ho, and finds out that In-Ho just filmed what they slept. So she asks her man to get rid of In-Ho.

Seok-Hee is informed that her grandpa is sick, and she decides to return to Korea. Cheol-Hee wants to stop Seok-Hee, but Je-Kook is formed that Seok-Hee took the flight. She asks to send Seok-Hee back to New York as soon as she lands. Je-Kook thinks the timing’s odd that as soon as the senior chairman went to the Er, Seok-Hee boarded a plane to Korea after 15 years. Joo-Young promises to look into it.

The man does race with Seok-Hee at the street, but he gets hit. He claims that he gets hurt, and she asks him how much will do? The two are invited to the police station, and Detective Oh gets the man a lawyer because Seok-Hee is silent. The lawyer Yoon-Do arrives and asks the man for 30 percent of the settlement.

Seok-Hee finds out that she had a video recording in her car, and Yoon-Do thinks she did an intimidation to his client. So she shows the video to him. Seok-Hee thinks Yoon-Do believed his client and tried to make easy money, and he tried to settle with a weak woman. She tells him that it’s her first time forgiving a stupid lawyer and an evil fraud. But she tells him to dress the part if he wants to look like a pro.

Yoon-Do calls Seok-Hee old lady, and thinks her makeup and style tell him that she is married. He reveals that his father bought him the precious suit, and thinks settling and parting ways would be a win for them all. Seok-Hee points out that the man conned her, and thinks it’s a case of fraud. She blames him for lecturing her, and he wonders why she didn’t show the video from the start. He thinks it’s obstruction of justice.

Seok-Hee walks, and Detective Oh thinks she is gallant. He asks Yoon-Do if he is in love, but he says that she’s not his type. Je-Kook arrives and wants to take Seok-Hee home. But Seok-Hee wants to go to hospital. So Je-Kook asks her men to catch Seok-Hee, and Yoon-Do goes to stop them. Detective Oh says that they frown upon abduction and assault. But Je-Kook thinks they’re mistaken, and reveals she is Seok-Hee’s lawyer.

Yoon-Do mentions grabbing a woman’s arm without consent is indecent assault, and Seok-Hee asks him to drive her. The two arrive at the hospital, and Yoon-Do notes that some men follow Seok-Hee. Seok-Hee tells her grandpa Wang-Pyo that she is back. The woman reports to Young-Seo that Seok-Hee came to the hospital, and Wan-Joon thinks Seok-Hee came for her inheritance. Yoon-Do finds Seok-Hee, and she tells him that she doesn’t need his help anymore.

Seok-Hee returns home, and Wan-Soo goes to hug her. But she rejects it. Young-Seo introduces Soo-Jin to Seok-Hee, and Seok-Hee remembers that Soo-Jin majored in cello. Seok-Hee laughs at Young-Seo when she knows that the kid Seo-Jin’s father is Cheol-Hee. But Seo-Jin says that Young-Seo isn’t his mom. Seok-Hee holds out and introduces herself as the half-sister to Seo-Jin. Seo-Jin shakes hands with her.

Cheol-Hee arrives, and Wan-Soo wants to pour wine for Young-Seo. Cheol-Hee glares at Wan-Soo, but Seok-Hee asks for a toast to celebrate a new brother after 15 years. Cheol-Hee rages to put Seo-Jin’s phone into water, but Seok-Hee pushes over the glass. She laughs and thinks they’re all just the same. Cheol-Hee asks Seok-Hee why she came back without his permission, and she says that she missed her mom’s death and she didn’t want to miss Grandpa’s.

Cheol-Hee says that he will recover, and asks Seok-Hee to leave as soon as day breaks. She promises it but she says that she doesn’t feel like it. He yells at her, and she says that she isn’t a minor anymore. She thinks she has most of the right to live there than anyone.

Seok-Hee checks the table and thinks there are no hidden cameras. She remembers that she asked her mom why dad doesn’t stay with them, and she was told that he is busy. Kyung-A tells Seok-Hee to use the phone, and she will assign her a secretary to help her. But Seok-Hee thinks Kyung-A is going to spy on her, and claims that she will find a secretary she feels comfortable around. Kyung-A says that there’s a service on the 30th anniversary of Seok-Hee’s grandmother’s death, family tradition states the women must wear a hanbok. She says that she will have the designer visit.

But Seok-Hee wants to go herself and gets some air. Kyung-A reminds Seok-Hee to move quietly. Seok-Hee arrives at the shop, but she is told that she has to wait 10 minutes because the sudden walk-in customer. Seok-Hee sees Na-Ri bullying the seller, and makes her trip. So Na-Ri chases Seok-Hee. People recognize Na-Ri and take photos of their fight. Yoon-Do stops Seok-Hee and thinks she assaults with a deadly weapon. He tells Na-Ri that his father is a fan of her, and thinks Seok-Hee is jealous of Na-Ri’s beauty.

Yoon-Do is informed that the landlord wants to increase the deposit, and Seok-Hee asks Yoon-Do to work for her. Seok-Hee realizes that Na-Ri is Seo-Jin’s mom. Seok-Hee calls Yoon-Do and asks for a meeting up. She asks him to find the stalker who has been texting her for 10 years, and he thinks she should hire her team. She promises him the 10 million won retainer.

Yoon-Do asks Detective Oh to find out who owns the number, but Detective Oh thinks it’s illegal to search private info. Yoon-Do shares that his client was stalked for 10 years. Joo-Young reports to Je-Kook that before Seok-Hee boarded the plane, she received a text from Korea, and it’s a burner phone. Yoon-Do tells Seok-Hee that the text was sent from Seongbuk-dong, and she remembers it’s her neighborhood.

Joo-Young shares that Yoon-Do’s family owns massive debt. Joon-Hyuk asks if they will accept Yoon-Do. Je-Kook points out that nobody wants to work with Seok-Hee. Seok-Hee wonders who is her man, and Yoon-Do arrives. The man Du-Man asks for his daughter at the roof, and her daughter died in an accident last year. Je-Kook arrives at the roof, and reminds Du-Man to think of his smart son. He is moved, and the men catch him.

Yoon-Do wants to listen to Du-Man history, and Seok-Hee sees Du-Man being taken into the car. She drives to hit the car.