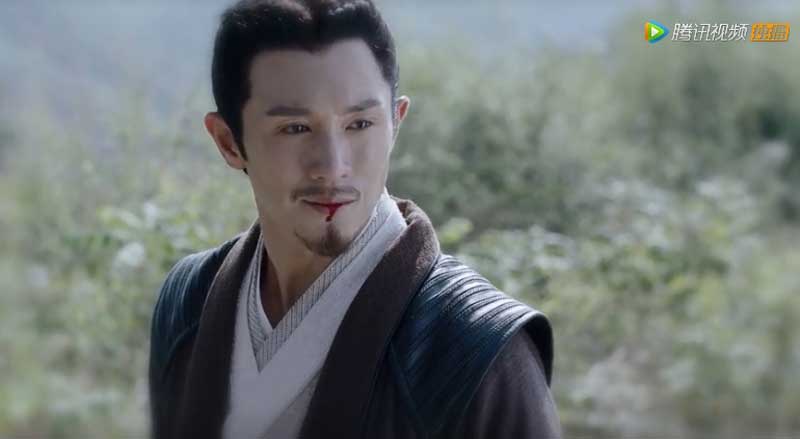 Note: From here on out there are specific plot spoilers for Legend of Fei Chinese Drama: Episode 14.

Yin Pei thinks he won’t just get whipped. Zhou Fei reveals North Blade can cut off water and wrap wire. Wu Chuchu thinks North Blade is sharp. But Yin Pei says that North Blade is very mean. Ji Yunchen reveals he wanted to go downhill when he just got his blade art. He says that his master told him that the blade is like hoe after he failed to stop him.

It flashes back. Ji Yunchen kills many sword masters, and wants to set up his sect. But he hears the guy says that his master Guan Feng was defeated by Yin Wenlan. Ji Yunchen is furious to visit Yin Wenlan, and wants to challenge him. But Yin Wenlan gets the follower to tell Ji Yunchen to leave. Ji Yunchen thinks Yin Wenlan fears to fight with him, and threatens to tell people that Mountains and Rivers Sword isn’t better than North Blade. Yin Wenlan ignores Ji Yunchen.

Yin Pei casts the stone to Ji Yunchen and tells him that he’s the son of Yin Wenlan. Ji Yunchen tells Yin Pei to call his father out. But Yin Pei rejects it because he doesn’t want to go to study. So Ji Yunchen takes Yin Pei to have fun.

The storyteller tells people that North Blade was defeated by Yin Wenlan. Yin Pei wants to go to see North Blade. Ji Yunchen is furious to kidnap Yin Pei, and tells Yin Wenlan to come to the mountaintop.

Yin Wenlan tells Ji Yunchen that he just didn’t want him to be killed by him. Because he knew he has many blade mountains and fire seas to break through.