This is the recap for Legend of Fei Chinese Drama: Episode 3. Li Jinrong sees off Zhou Yitang with her blade. She tells him that he’s not related to 48 villages after he goes out of the door. But he doesn’t hear what she said that it’s related to her. 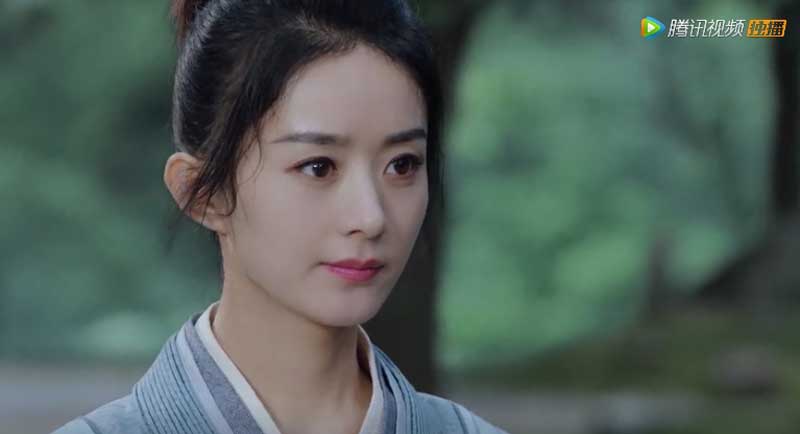 Note: From here on out there are specific plot spoilers for Legend of Fei Chinese Drama: Episode 3.

Half a Year Later

Zhou Fei stands at the cliff and remembers what he father said that only strong men have the right to make a choice. She swears to break through the Qianji battle array. She pulls out her blade and gets into the battle array. But she is hurt.

Yu Lao points out that she was killed by Qianji battle array if he didn’t close the trap. She thinks she will break it through if she has the light art like Xie Yun. But Yu Lao points out that she was just like monkey to turn somersaults. She asks him about the tip to break through Qianji battle array. He tells her to close her eyes and senses it with her heart.

Shen Tianshu brings Wu Fei’s wife to him. She comforts him that the kids left safely, and tells him not to hand over the token. But Shen Tianshu killed Wu Fei’s wife. Wu Fei takes off the chains and climbs to his wife.

Wu Fei’s daughter Wu Chuchu asks Zhang Chenfei to take a break because her little brother cannot run. He tells her to hang in there because someone will pick them up. She agrees to it and tells her brother that their parents will pick them up after they arrive at 48 villages. Shen Tianshu comforts Wu Fei that he will take care of his kids.

Xie Yun shows up and wants to help Zhang Chenfei. He takes the people to arrive at the pass, and shows the sores to the guard. The guard tells them to get lost. The follower reports to Chou Tianjin that they’re going to arrive at Huo Family Fortress. Chou Tianjin worries that Huo Family Fortress helps 48 Villages because they’re good friends. He tells the follower to find out the whereabouts of Blue Wolf.

Xie Yun thanks Wu Chuchu for giving him the rouge, and thinks he couldn’t make the sores himself. But she thanks him for saving them instead. He tells them to return to 48 Villages. Zhang Chenfei asks Xie Yun about his intent. Xie Yun says that he came to take them away.

Zhou Fei shows up. Yu Lao tells her to take a weapon because he is going to start Qianji battle array. But she remembers Xie Yun didn’t hold any weapon that day. So she doesn’t take any weapon as well. Li Yan gives the snack to Bai Neng, and asks him to let her go to Ink River to take a look. But he only allows her to go to the cliff.

Li Yan is furious to blame Bai Neng for bullying her because Zhou Fei goes to Ink River each day. Li Sheng grabs Li Yan’s shoulder and tells her that he can throw her into the river if she wants to go there. She cries to ask him for forgiving her, and sees Zhou Fei breaking through Qianji battle array.

The trial begins. It requires the disciples to take the window flowers if he wants to go downhill. Li Sheng defeats the chief of Phoenix Sect, and gets 12 window flowers. Zhou Fei challenges Li Jinrong. Li Jinrong breaks Zhou Fei’s blade. Zhou Fei remembers what her mom said that she needs to study in the villages all her life if she cannot defeat her.

Zhou Fei gives two flowers to Ma Jili. He wonders why he walked down from the stage because she still has time to pick other flowers. Li Sheng tells Zhou Fei that the people will mock her for it. She talks back that she doesn’t want to show off like him. Li Jinrong shows up and tells the two to go to see Madam Wang. Madam Wang tells Zhou Fei that her grandson Zhang Chenfei is missing after Zhou Yitang got him to complete the task.