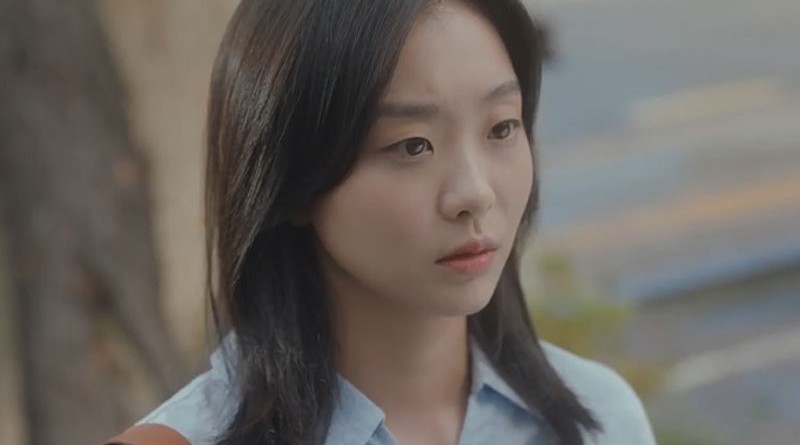 This is the Recap & Ending for Netflix K-Drama Our Beloved Summer: Episode 3. Choi Ung explains why he hates Yeon-Su. The classmates ask for Yeon-Su for her notes. But Yeon-Su tears her notes up. Yeon-Su is giving the presentation. But she tells the people that she’s the only one in her team.

Note: From here on out there are specific plot spoilers for Netflix K-Drama Our Beloved Summer: Episode 3.

Choi Ung thinks Yeon-Su doesn’t have social skills. He drinks with her at the restaurant when it snows outside. He tells her that he will take her home if she’s drunk. But she has a wine fight with him. She provokes the seniors and she has a fight with them. The one who gets hurt is Choi Ung.

Yeon-Su takes Choi Ung to the barber shop, telling the hair stylist to cut Choi Ung’s hair according to the model’s hairstyle in the magazine even if the hair stylist tells Yeon-Su that the hairstyle isn’t suitable for Choi Ung. Yeon-Su takes Choi Ung to the library to study. He wants to enjoy the cherry blossoms with her. But she’s against it because she thinks the cherry blossoms don’t have any scent.

Choi Ung runs into Yeon-Su and asks her for having lunch with him. But she tells him to have lunch with his friend because she thinks studying is more important than him. She walks away. The friend thinks Yeon-Su isn’t a good girlfriend. Choi Ung scolds his friend because he knows nothing about Yeon-Su. He remembers she helped him study and she accompanied his mom to prepare vegetables.

Yeon-Su carries Choi Ung when he’s drunk. She gives the guys a lesson after they bullied Choi Ung. Choi Ung is upset because Yeon-Su didn’t accompany him to eat. She shows up and scatters the cherry blossoms. He’s moved to kiss her. But she breaks up with him and tells him that he’s the only thing she can give up. She walks away.

Choi Ung lies on the floor to think about what Yeon-Su said that he didn’t work hard to maintain their love relationship. He closes his eyes. Eun-Ho sees the comments which was written by Sol-Yi who badmouthed Choi Ung. Eun-Ho fights it back that Choi Ung is successful. Choi Ung asks Eun-Ho for work.

Yeon-Su walks Sol-Yi and tells her that she encountered Choi Ung because of work. But she doesn’t admit that she has feelings for Choi Ung after she saw him. She gets a call from Ji-Ung. NJ laughs when she watches the documentary of Choi Ung. She tells Mi-Yeon that Choi Ung made her happy even if he’s a fool in the documentary.

NJ gets a call from Choi Ung. She puts down her work and picks up his phone. But he hands up when she’s trying to speak to him. So she calls him and she’s told that he wants to see her building before he draws it. She feels happy and invites him to see her building with him. But he tells her that he’s busy. She tells him not to let her wait for him for a long time.

Choi Ung is startled when Eun-Ho shows up behind him. Eun-Ho blames Choi Ung for calling NJ. He tells him that all of the people in the nation will hate him. Ji-Ung visits Choi Ung and tells him to film the documentary with Yeon-Su. Choi Ung is against it because he and Yeon-Su has broken up. Eun-Ho reminds Ji-Ung that the past Choi Ung will come back if he gets him to film the documentary with Yeon-Su.

It flashes back. Choi Ung is drunk to lie on the street because Yeon-Su hates it. He refuses to go to school and begins to do workouts. Fortunately, drawing saves Choi Ung’s life.

Choi Ung drinks with Eun-Ho at the restaurant. He’s in anger when he remembered Yeon-Su was arrogant to tell him that she can get another artist to replace him. He thinks he needs to do something she hates. He tells Eun-Ho that he’s going to give a work to him. Eun-Ho mistakes that the work is about NJ.

NJ returns home and lies on the couch when she puts the phone on her forehead. She thinks Choi Ung is a player, and posts the message about what Choi Ung did to her. The fan thinks the guy is just cautious. NJ takes a look at Eun-Ho’s social media. She finds out that Choi Ung drank with his manager. She’s furious and she likes the photo. She takes a look at Choi Ung’s painting.

Choi Ung is drunk to walk alone the street. He runs into Yeon-Su. She tells him to go home after knowing he drank. She tries to walk away. He holds her hand after he remembered he tore up when she dumped him. He releases her hand after she stared at him. She walks away.

Yeon-Su arrives at the office. Yi-Hoon is happy to see Yeon-Su. She’s confused. Myung-Ho reveals Eun-Ho agreed to the cooperation because Yeon-Su promised something to Choi Ung. Eun-Ho is furious to throw the contract to the table. He blames Choi Ung for getting him to do that.

Eun-Ho is surprised that he got tons of likes. He finds out that NJ liked his photo. Yeon-Su rings the bell. Choi Ung smiles and goes to open the door. Yeon-Su remembers Ji-Ung told her that Choi Ung ate the peaches with him for making him allergy.

Choi Ung opens the door and tells Yeon-Su to film the documentary. She yells at him. He feels happy after knowing she actually hates it.