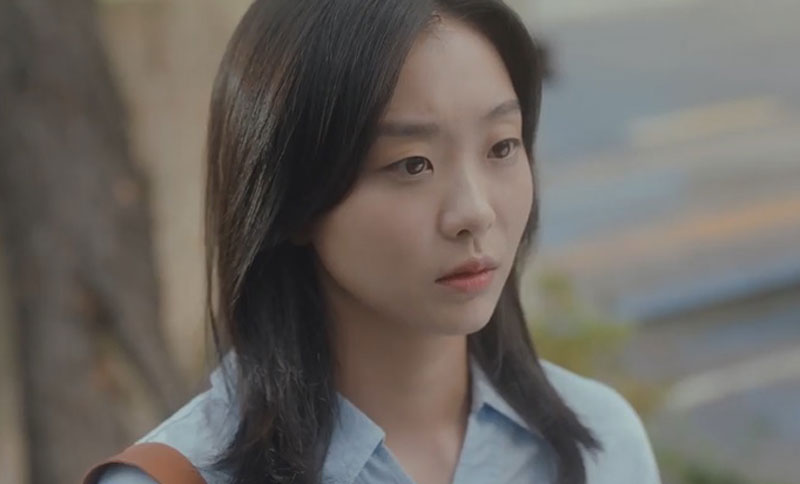 Note: From here on out there are specific plot spoilers for Netflix K-Drama Our Beloved Summer: Episode 7.

Ji-Ung arrives at the office and blames Dong-Il for giving the bad follower to him. Dong-Il tells Ji-Ung that the new follower is in the meeting room. He flees after he walked into the meeting room. Ji-Ung wants to fire Min-Kyung after he knew the writer Dong-Il gave him was Min-Kyung.

But Chae-Ran is against it. She reminds Ji-Ung that they need Min-Kyung. Eun-Ho tells Choi Ung that he’s going to throw him a party. He adds that he invited Yeon-Su. Choi Ung is startled to return to his room. He packs his stuff and runs away when Eun-Ho is preparing the foods.

Yeon-Su tells Our Beloved Summer that she never ran away when she’s rinsing her mouth in the bathroom. But she actually ran away from Choi Ung last night. The people are waiting for Choi Ung and Yeon-Su in Choi Ung house. But the two are missing. Ji-Ung tries to call them. They don’t pick up his phone.

Sol-Yi complains that she contributed the wine for the party. She thinks Yeon-Su isn’t the one who likes to run away. She tries to call Ja-Kyung to ask her about Yeon-Su’s whereabouts. But she gets a message from Yeon-Su who tells her that she went somewhere.

Choi Ung thinks about what he said to Yeon-Su last night when he’s peeling the banana. But the banana drops. He thinks Yeon-Su doesn’t remember what he said. He gets a message from Eun-Ho who complains to him why he went to same place with Yeon-Su. Choi Ung sighs.

Yeon-Su sits on the bench and tries to take out her phone from her pocket. But she puts the phone back because she doesn’t have any friend. She convinces herself that she didn’t run away. Min-Kyung learns that the cast ran away. She thinks it’s a good chance to film them.

Eun-Ho gets a call from Ji-Ung. He promises to find Choi Ung. He’s very happy to throw away the phone to the couch. He begins to jump. But he’s startled after seeing Sol-Yi. She tells him to drink the wine and eat the foods since Choi Ung isn’t at the house. He thinks it’s a great idea.

Choi Ung encounters Yeon-Su in the library when they’re looking for books. She feels sorry for crying in front of him. Chi-Seong buys NJ the water and gives it to her. He tells her not to get the fans to do the volunteer work. The fan hands over the water to NJ and praises her for her looks. NJ thanks her but she hears the fan badmouthing her with other fans when she intends to give them the gift.

Choi Ung takes Yeon-Su to his family restaurant. Yeon-Ok welcomes Yeon-Su and goes to prepare the dish Yeon-Su wants to eat. Chang-Sik sees Choi Ung and tries to inform Ji-Ung that he found Choi Ung. But Choi Ho stops Chang-Sik because he doesn’t want to disturb the two kids.

Choi Ung walks on the street and regrets for what he said to Yeon-Su. He gets a footage from Eun-Ho. Eun-Ho cries to wish Choi Ung to be happy when he’s drunk with Sol-Yi. Yeon-Su returns home and remembers Choi Ung complained to her that she always doesn’t tell her feelings to him. She left after she gave the foods to Ja-Kyung.

NJ sees Choi Ung and calls him. He’s startled and the snacks drops from his hand. It makes her laugh. She tells him not to film the documentary if he doesn’t want to do that when they’re on the swings. The kids pass by and recognize NJ. NJ autographs for them. They run away.

Choi Ung tells NJ that people recognized him because of the terrible documentary. She laughs at him and asks for having meal with him. But he rejects it because he just had meal. She brings up that he didn’t repay her if she helped him three times.

Yeon-Su calls Choi Ung when she walks. But he doesn’t pick up her phone. She spots NJ kissing Choi Ung. Ji-Ung calls Yeon-Su from her back. NJ confesses her feelings to Choi Ung. He’s startled and the ice cream drops from his hand. She leaves after seeing the more kids.

Yeon-Su tells Ji-Ung that she just walked. But he remembers he found her when she watched NJ and Choi Ung. He thinks Yeon-Su and Choi Ung should take duty for the breakup. Yeon-Su is surprised that Ji-Ung is good at dating. He brags that there’re many women liking him.

Yeon-Su sees drunk Sol-Yi. She walks to her. Choi Ung returns home. He finds out that Eun-Ho is drunk to lie on the floor. He’s furious to press the pillow to his face. Ji-Ung carries Sol-Yi to the bed. Ja-Kyung walks into the room. She embraces Ji-Ung after seeing him. Yeon-Su is surprised that the two are close. She leaves the room with them because Sol-Yi needs to sleep.

Choi Ung cleans up the room when Eun-Ho falls asleep on the couch. He sees the note he wrote. It cheers him up. But he kicks him after knowing Sol-Yi asks him for some money. Yeon-Su walks out of her house. Ji-Ung is waiting for her. He asks her for letting him give her a ride. But she rejects it until he honked the horn.

Eun-Ho walks out of the house when Choi Ung is watering. He ignores him and walks away. Choi Ung is confused until Eun-Ho kidnaps him and throws him into the van. Eun-Ho drags Choi Ung out of the van after they arrived at the place.

Sol-Yi bumps Choi Ung and goes to vomit because of her motion sickness. Choi Ung blames Ji-Ung for doing it to him. But he sees Yeon-Su getting off another van. The couple are told that they must stay in the mountain for three days.