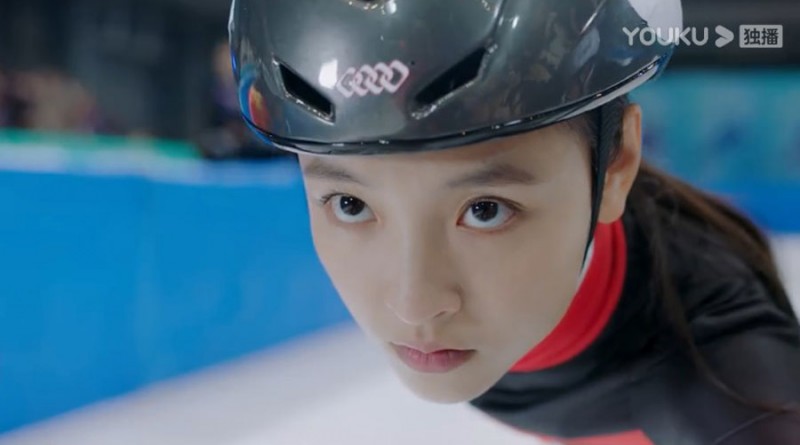 This is the recap for Skate Into Love: Episode 1. Tang Xue does short track speed skating and she wins the championship. The president gives the gold medal to her, and cheers her up to get in national team. 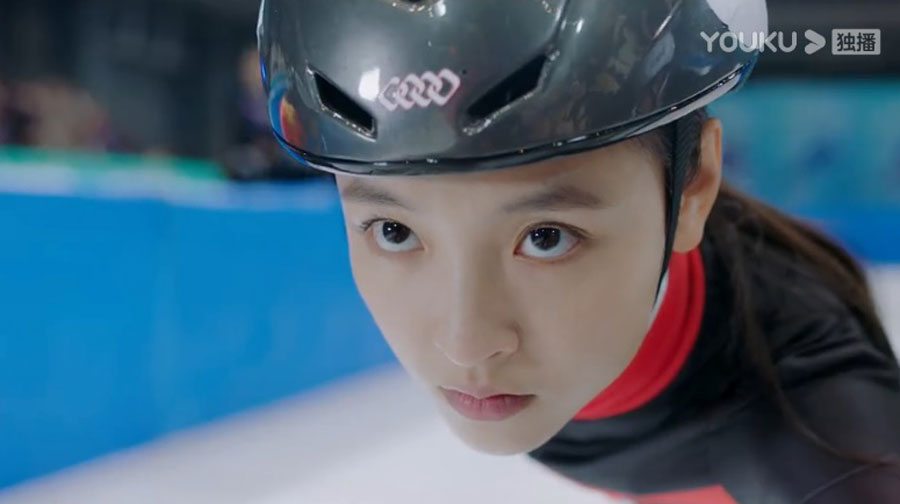 Note: From here on out there are specific plot spoilers for Skate Into Love: Episode 1.

Zhen Yu breaks Tang Xue’s dream and asks her if it’s her. She complains that the soybean and pig’s feet her dad cooked for her are having chemical reaction in her belly, and hits his head.

Zhen Yu asks Tang Xue not to get angry as he is escorting to Lin University. She emphasizes that he comes from medicine department, and he says that he will to follow her no matter what department he is in.

Tang Xue asks Zhen Yu to transfer to the animal medicine department, and thinks treating animal and human are same. Zhen Yu explains that he wants to be the great doctor like Tang Xue’s mom.

The news tells that Da Jing got the gold medal of short track speed skating, and MC asks Da Jing what kind of spirit supported him to take the day.

Da Jing thinks persisting is very important, and Zhen Yu recognizes Da Jing as team member of Tang Xue before. Tang Xue realizes that the person can only arrive at the destination when he persists til the end.

Yu Bing takes the team member to win the game of ice hockey, and thinks more and more people will watch them. Manager Ma thinks Yu Bing will have a good future, and President asks about the candidate of Yu Bing’s assistant. Manager Ma says that the person will come soon.

Tang Xue wants to take the position of assistant, and Manager Ma asks her if she can skate. Zhen Yu brags that Tang Xue got first in short track speed skating.

Manager Ma wonders why Tang Xue gave up since she was so outstanding. She says that she needs to study.

Tang Xue arrives at the dormitory and thinks it’s beautiful. Meng Huan runs to hug Tang Xue, saying that she did it for her. Tang Xue tells Meng Huan that she applied the ice hockey club, and promises to take Meng Huan no matter where she goes.

Yu Bing runs in the club and looks up on the portrait of Xu Feng. He wishes to let more people know the power of China ice hockey like Xu Feng. Yu Bing is surprised to see Xu Feng, and President introduces Yu Bing as the current ice god.

Xu Feng says that he watched Yu Bing’s game and thinks he is outstanding. Yu Bing wishes to get honor for nation like Xu Feng. Xu Feng reminds Yu Bing that the process of dream is very cruel, and tells him not to give up.

Tang Xue wants to take a shower. But Meng Huan tells Tang Xue that the shower system is broken, and suggests her to take it in the stadium.

Tang Xue goes to the bathroom and makes the sign fall. Yu Bing walks in and borrows shampoo from Tang Xue. She does it and takes a basin as hat to run away. Yu Bing sees the student ID Tang Xue left.

The next day, Liu Ying wakes Tang Xue up and introduces herself. Liu Ying is excited to hold out after knowing Tang Xue coming from animal medicine department.

Meng Huan runs in with a stack of stuff, and reveals a nice man helped her. Liu Ying wonders why she never got help from nice men, and Meng Huan tells Liu Ying to call men handsome men no matter he is handsome or fat.

Tang Xue calls Zhen Yu handsome man when she’s talking with him over the phone. But he is scared. She tells him to buy her extra breakfast.

Zhen Yu gives the breakfast to Tang Xue, and Meng Huan mistakes him as Tang Xue’s boyfriend. Zhen Yu asks Meng Huan to look at his eyes, and she laughs. He falls for her, and Tang Xue kicks Zhen Yu.

Zhen Yu tells Tang Xue that his heart was beating fast when Meng Huan smiled at him. But Tang Xue tells Zhen Yu that Meng Huan was reading male sterilization book. Zhen Yu likes Meng Huan even if she is dangerous.

Manager Ma asks Yu Bing to take a look at the papers of his assistant, and Yu Bing chooses Tang Xue as he thinks it’s a good chance.

Meng Huan takes class with Tang Xue, and tells her that the teach Guo Qian is called eagle eye as he can find the cheating no matter what she does.

Zhen Yu tells Tang Xue that there was a pervert hitting ice god last night, and she sees herself after taking away the phone from him. Tang Xue thinks the person just passed by. Meng Huan asks Tang Xue if she ran into the pervert since she went to the bathroom. Tang Xue is informed that she got passed by the dragon club.

Tang Xue asks Manager Ma why they chose her. He says that they did it because she has learned the short track speed skating. Tang Xue signed the contract after Manager Ma promised to allow her friends to join the club.

Tang Xue goes to see Yu Bing and recognizes him.

It flashes back. Tang Xue startles Yu Bing with the worm and chases him. He trips in the field.