This is the recap for Eternal Love of Dream (Three Lives, Three Worlds, The Pillow Book): Episode 14. Feng Jiu is surprised that the backfire was so strong, and realizes that she needs to leave the place as the backfire is getting worse and worse. 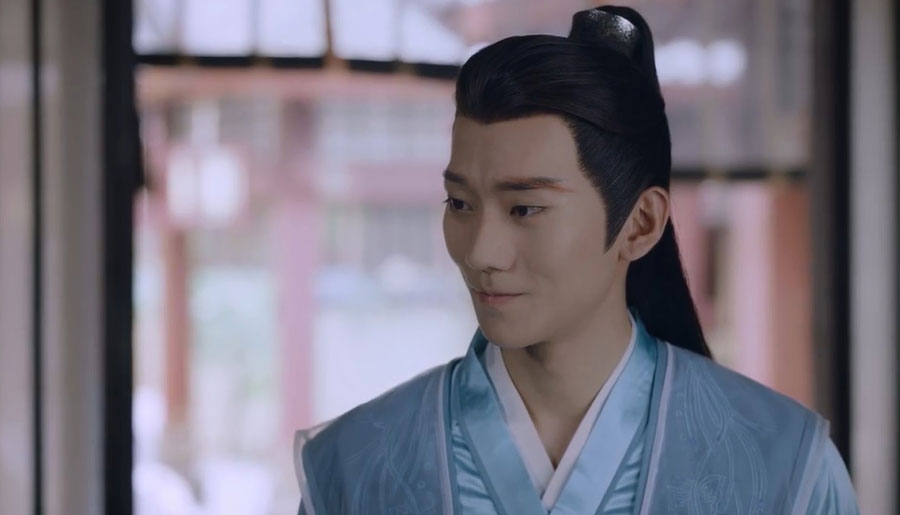 Note: From here on out there are specific plot spoilers for Eternal Love of Dream: Episode 14.

Mu Yun mistakes that Feng Jiu doesn’t like the dishes, and wants to cook sweet potatoes. Feng Jiu smiles and thinks only Mu Yun knows her.

Mu Yun opens the door and runs into Xuan Ren. He tells her to leave and takes the sweet potatoes to see Xiao Jiu. He asks her what she’s thinking about. She wants to pay her respect, but he stops her and asks her why she doesn’t eat.

Xiao Jiu asks Xuan Ren what happened to his hands. He says that they were burnt by the charcoal fire when he baked sweet potato for her. She goes to take the ointment. He catches the chance to hug her and tries to kiss her. But she avoids it, and tells him that she’s going to apply the ointment for him.

Xiao Jiu binds up Xuan Ren’s hand and remembers Dong Hua. Xuan Ren asks her what she’s thinking about. She shakes her head and smiles. He tells her that he will take her to hunting ground tomorrow. She thinks he treats her so nice. He tells her to eat up the baked sweet potato.

The next day, Feng Jiu wants to see the scenery so that Xuan Ren rides the horse with her. Feng Jiu thinks she and Dong Hua only have wrong fate.

Feng Jiu wants to make the dessert to thank Xuan Ren for his caring, and Mu Yun thinks Feng Jiu and Xuan Ren are in love.

Xuan Ren asks Qing Ti to smell the incense he made for Feng Jiu, and asks if he feels that he is walking in the field. But Qing Ti doesn’t have the feeling.

Qing Ti doesn’t understand the drawing and wants to ask Feng Jiu about it. Xuan Ren agrees to it. Feng Jiu tells Qing Ti that the section of map is a mechanical metal plate, and it will be a sword when it’s pulled off.

Qing Ti thinks it’s convenience that the dagger can be long sword and crossbow. But Feng Jiu prefers to make it into slice.

Qing Ti reminds Feng Jiu the stain on her face, and he falls for her when she wipes off the stain. She asks him if he used the cream she gave him, and he says that it’s too precious to be used.

Qing Ti thinks Xuan Ren will like pastries because it looks good. He asks Feng Jiu if the pastries come from her hometown, and points out that he never saw the foods since he went to frontier juncture frequently. Feng Jiu explains that the food is what she learned while travel. You can also check out Eternal Love of Dream: Episode 13.

Feng Jiu takes sorrowless cakes to see Xuan Ren, and wishes him to forget sorrow. He asks her if he is the first one to taste the cake. She says that her friend tasted it and thinks he is wise and brave. You can also check out Eternal Love of Dream: Episode 15.

Xuan Ren blames Feng Jiu for not letting him taste the cake first, and thinks he doesn’t have any position in her mind. He tells her to leave, but he regrets it soon after finding out that the cake is so delicious.

Xuan Ren tells Zhu Wan to prepare the banquet for Qiqiao festival, and Zhu Wan wants Feng Jiu to help her. Xuan Ren agrees to it, and mentions sorrowless cake Feng Jiu made is marvelous.

Chief Eunuch tastes the cake for Xuan Ren, and he dies. The doctor finds out that Chief Eunuch was killed by poison, and sorrowless cake is toxicant. Ying Prince thinks Feng Jiu is suspicious and tells Xuan Ren to send her to jail.

Feng Jiu gets on knees and asks Xuan Ren to trust her, but he lets Qing Ti send her to jail.

Qing Ti thinks the murderer is someone else, but Xuan Ren points out that Queen and Ying Prince all think Feng Jiu is the murderer. Xuan Ren doesn’t know how to help Feng Jiu because she didn’t tell him about her family.

Qing Ti thinks Feng Jiu is innocent, and wants to look into it. Xuan Ren tells Qing Ti to bring evidence to him.

Qing Ti asks Feng Jiu to tell him the truth, and reveals Xuan Ren is waiting for her outside. Feng Jiu realizes that Xuan Ren trusts her.

Queen worries that Xuan Ren loses his principle for the love, and tells him not to get his mercy being used by someone. Xuan Ren understands it, and Queen tells Yang Shun to serve Xuan Ren.