In the 13-14th episodes of Story of Yanxi Palace Chinese Drama 2018 Recap, Imperial Concubine Jia instigates prince Hong Xiao to frame Wei Yingluo, but she is deprived to raise her son after emperor knew it. Wei Yingluo still feels wronged since Hong Xiao didn’t get punished. 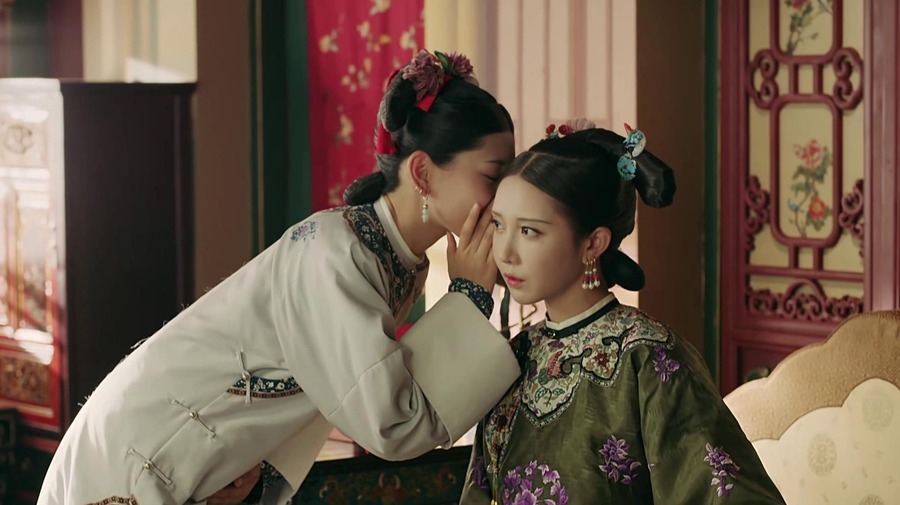 Note: From here on out there are specific plot spoilers for Story of Yanxi Palace Chinese Drama Episodes 13-14.

Wei Yingluo takes the dog fur to complete the task, but Fu Heng finds out she changed the dog accoring the color of the fur. He thinks she is a nice person when takes the dog to play. But he didn’t expect she made him to see her saving. Madam Liu tells her she must savage until the end if she wants to be a savage person.

Imperial Concubine Xian’s faith is ruined when her father admits his sin, and he begs her to save him. Meanwhile her mother hits wall to commit suicide after knowing her son passed away because of sickness. She takes her mother’s death body, and is sorrowful.

Prince of Yi Qin Hong Xiao knows Qin Xi wants to get promoted, and asks him a favor to frame Wei Yingluo.

Wei Yingluo’s hand shakes while handwriting, so she ties up her hand with rope. Maids misunderstand her to commit suicide, and persuade her. They are relief after knowing the truth. Ming Yu thinks she wanted to win empress’s favor, and invites Er Qing to deal with Wei Yingluo. But Er Qing refuses her.

Fu Heng notices Hong Xiao and Qin Xi are closed, and guesses they have evil plan. Qin Xi asks Wei Yingluo to meet up with her sister’s death at garden in the evening. But she asks someone else to beat up him when she catches his intention. But he tells others that she seduced him. Hong Xiao shows up, and arrests her.

She knows she was framed by them, and claims she went to pick up tuberose running into Qin Xi. But Hong Xiao thinks the evidence is obvious since Qin Xi’s face is injured. Just then Fu Heng shows up, and tells them emperor arrives.

Emperor doesn’t expect his good mood is interrupted by those servants, but he has to deal with the case. Hong Xiao takes out the letter that Wei Yingluo wrote for Qin Xi as evidence, emperor believes it since he knew she is a evil maid. But she claims the paper is so expensive who she cannot be affordable, and takes out her handwriting as evidence. Qin Xi flustered, and tells emperor that Hong Xiao asked him to frame Wei Yingluo.

Emperor doesn’t expect Hong Xiao would do such dirty thing as a prince, and is disappointed with him. Wei Yingluo guesses he is instigated by someone else to frame empress. But emperor just scolds Hong Xiao, but doesn’t punish him. He thinks empress tried her hard to teach Wei Yingluo after seeing her handwriting, and asks her to return to continue her handwriting. But she sees emperor is on Hong Xiao’s side, and is intention to say that he will deal with the case impartially.

The sacrifice ceremony is upcoming, emperor usually shares the meats with ministers. The meats are terrible, but nobody dares to reject it. Wei Yingluo gives salt to Fu Heng, and asks him to eat it with the meats as it will taste better. He knows he will be punished for doing it, but accepts it since she cares him.