In the 25-26th episodes of Story of Yanxi Palace Chinese Drama 2018 Recap, Emperor is furious after knowing Fu Heng wanted to marry Wei Yingluo. But he asks her to be his imperial concubine, and promises her what she wants. But Wei Yingluo rejects it. 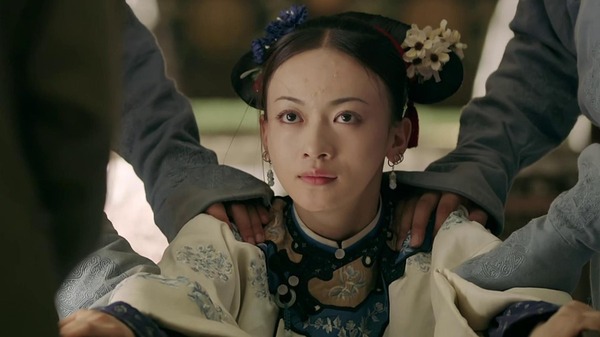 Note: From here on out there are specific plot spoilers for Story of Yanxi Palace Chinese Drama Episodes 25-26.

Imperial Concubine Dowager Yu asks Queen a favor to help her son, but Queen is powerless to help. Mr. Li suggests emperor to kill Wei Yingluo to cover the truth, but emperor is furious as she is the victim.

Wei Yingluo visits Ye Tianshi, but he is tied up. The servants are going to tie her as well, she recalls her sister was murdered like this when she almost dies. Just then Fu Heng shows up, and saves her. He tells her it’s the result she wants to take revenge.

Wei Yingluo sends a box to Imperial Concubine Dowager Yu, she is startled after seeing a hand in the box. Empress wants to drink watermelon juice to cool off, but Wei Yingluo stops her as the watermelon juice is cold in property. Empress shows Wei Yingluo’s new invention iced fruits to emperor, but he wants her to forgive Hong Zhou.

Wei Yingluo is disappointed to emperor, and puts iced grape in his foods. He keeps diarrhea after eating it, and the servant invites Ye Tianshi to see him. Just then Wei Yingluo visits Ye Tianshi, and asks him the method to cool off. He reminds that he told her eating iced grape with tea may cause diarrhea, but doesn’t catch her smile.

Wei Yingluo’s heart bleeds when thinking of powerful person can avoid law. Empress tells her that she can take her revenge one day when she has enough power.

Ming Yu loves Fu Heng, and leaves sachet sewed at his office. Hai Lancha thinks it’s Wei Yingluo sewed for Fu Heng. But Fu Heng denies as she wouldn’t sew wrong pattern, so Hai Lancha robs the sachet from him, and shows it to Ming Yu. She hurts her hand after knowing Fu Heng loves someone else.

Fu Heng confesses to empress that he loves Wei Yingluo, and wants to marry her. She thinks he wants her as concubine by mistake, but he wants her to be his princess. Empress is furious as their family will be against it. But he wishes her to persuade their parents. Empress has to agree since they fell for each other. But Er Qing is frustrated, and is envy of Wei Yingluo because she can be empress’s sister-in-law. Ming Yu points out that she can sleep with emperor to lift her family, so Er Qing plans to seduce emperor.

Emperor notices that Fu Heng visits empress more often, Hai Lancha tells him that Fu Heng falls for someone in eternal palace. Fu Heng is furious as Wei Yingluo cannot understand his hint, but she takes out a sachet. He smiles, and promises to protect her.

Er Qing pours tea to seduce emperor, but he is interested in Wei Yingluo. He asks her to change clothes for him, and doesn’t allow her to be in relationship with Fu Heng. He asks her to accept him, and claims he can give her what she wants. But she refuses him firmly.