In the 27-28th episodes of Story of Yanxi Palace Chinese Drama 2018 Recap, Wei Yingluo is sent to laborious department after murdering prince’s mother with thunder. But she worries about empress since she is going to give birth. Concubines want to frame empress since her helper left. 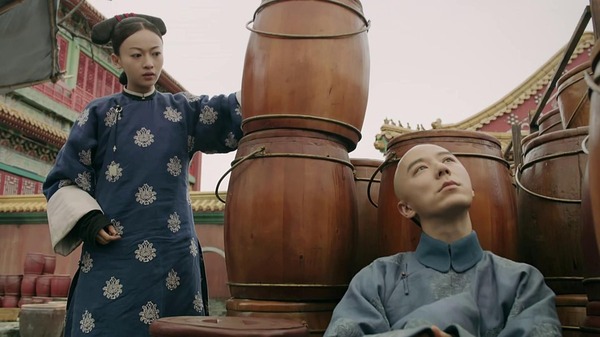 Note: From here on out there are specific plot spoilers for Story of Yanxi Palace Chinese Drama Episodes 27-28.

Er Qing wants to split Wei Yingluo and Fu Heng, so she persuades empress to marry Wei Yingluo to emperor. But Wei Yingluo claims she doesn’t want to share a man with empress when empress asks her about it. Empress is moved, and promises to marry her well one day.

Wei Yingluo is furious after knowing Er Qing offered to marry her to emperor, and blames her. But Er Qing pretends to be innocent. Wei Yingluo warns her not to seduce emperor when empress is pregnant.

Wei Yingluo hears thunder is upcoming, and plans to take revenge Ying Ning. The servant tells her that she cannot run away once emperor targets her. Fu Heng wants her to marry him, but she doesn’t want to implicate him, and breaks up with Fu Heng. Fu Heng leaves with sadness.

Empress thinks Wei Yingluo murdered Imperial Concubine Dowager Yu after hearing her death. But Wei Yingluo pretends to be innocent. Empress decides to drive her away, and Wei Yingluo asks her to keep her until empress gives birth. But empress worries about her safety, and refuses her. Wei Yingluo asks Ming Yu to protect empress after she leaves, because she knows Er Qing will betray her master. But Ming Yu doesn’t understand what she said.

Emperor thinks it must be Wei Yingluo after inquiring Bai Ling about Imperial Concubine Dowager Yu’s death. He goes to eternal palace to look for Wei Yingluo, but empress sent her to laborious department. He knows she wants to protect her maid, and claims he won’t forgive her.

Empress tells emperor that Wei Yingluo is her last hope when he doesn’t want to forgive her, and reveals she was punished by his mother when she said a word more than him, and didn’t have her will since then. He claims he didn’t want her to do that, and loves her. She tears up, and regrets that she didn’t protect herself. So she wants to protect Wei Yingluo. He is moved by her, and decides to forgive Wei Yingluo. He thinks empress praises Wei Yingluo too much if she begs him.

Fu Heng knows Wei Yingluo lives hard at laborious department, and wants to ask emperor to give marriage to them. But she worries that she will involve him as emperor in interested in her. He asks her to pay off his love with her life, so she takes off her clothes, and wants to pay it with her body. Fu Heng is disappointed, and claims he is a male. He hugs her, and Yuan Chunwang is looking at them nearby.