In the 35-36th episodes of Story of Yanxi Palace Chinese Drama 2018 Recap, emperor is shocked that he falls for Wei Yingluo since he split she and Fu Heng. Wei Yingluo requires to get punished to go back taking care of empress, and shows her love to Fu Heng. 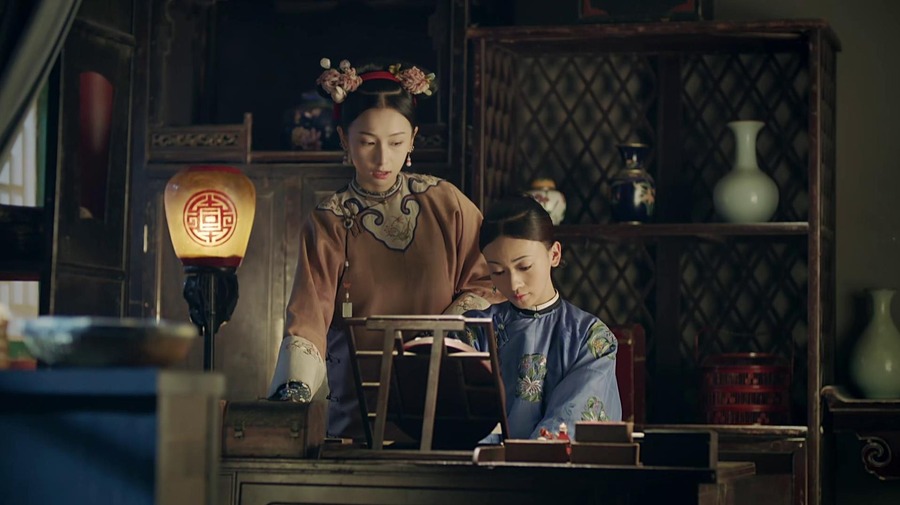 Note: From here on out there are specific plot spoilers for Story of Yanxi Palace Chinese Drama Episodes 35-36.

Yuan Chunwang has hated his master to push him out for protecting himself, and knows to be strong enough to live well. Wei Yingluo leans on his shoulder, and falls asleep after being tired. He tells himself that he must protect her, and not allow others to bully her.

Imperial Concubine Chun asks Fu Heng about his marriage, but he insists on doing it. She is upset after knowing he accepted Er Qing’s marriage for Wei Yingluo. She asks him if he remembers the scene when they met first. But he forgets it. She cannot believe it was her unrequited love, and asks him why he keeps her string bag. He says he thinks it was given by empress, and returns it to her.

Jin Xiu threatens Yuan Chunwang with Wei Yingluo. He is startled, and asks to talk with her in private. The next day Jin Xiu is missing, and Wei Yingluo forces him to tell the truth. He has to explains that he asked Jin Xiou to do the easy tasks because he doesn’t want Wei Yingluo to be disappointed with him.

Empress is disappointed with Fu Heng after knowing he promised to marry Er Qing. But he says that he cannot change it as it will damage their family’s reputation. Empress cannot ignore it, and begs emperor to withdraw the imperial edict, but emperor doesn’t agree at. She points out that he wants Wei Yingluo to be his imperial concubine. He is furious to blame her.

Empress is upset after being rejected by emperor. Ming Yu thinks Fu Heng isn’t ungrateful to empress, and regrets to fall for him. Hai Lancha takes Ming Yu to enjoy the landscape at the city wall, and wishes she can forget the discomfort.

Emperor is upset when remembering empress’s words, and asks himself why he had to split Wei Yingluo and Fu Heng. He asks the eunuch why he treated Wei Yingluo. The eunuch is intention to forgive her, otherwise she will be punished many times if she is just a nornal maid. Emperor realizes that he falls for Wei Yingluo.

Imperial Concubine Chun decides to win emperor’s favor, and isn’t loyalty to empress. She is intention to show up at imperial garden, and pretends to be pitiful. Emperor sleeps with her since she requires it.

He calls Fu Heng, but Fu Heng is upset because of he and Er Qing’s wedding. But emperor doesn’t want to change his mind. He asks Wei Yingluo if she wants to go back to eternal palace. She wishes emperor to allow her to take care of empress, and accepts the punishment.

Fu Heng isn’t happy at the wedding night, because the bride isn’t his lover. Er Qing is pleased for defeating Wei Yingluo, but he doesn’t want to touch her because of Wei Yingluo. Er Qing pretends to be soft, and asks her husband if he regrets it. Fu Heng promises her that he will try to forget Wei Yingluo.

Wei Yingluo kneels down to walk at the snow day. Emperor will forgive her, and lets her return eternal palace until she walks over 12 hours. Fu Heng is in pain as he doesn’t have chance to stay with her, and wants to hand her. But Er Qing takes him away.

Emperor is lost when seeing the heavy snow, Mr. Li asks him to forgive Wei Yingluo. Emperor gives her two paths, one is accepting that she never falls for Fu Heng, another is kneeling to walk at the snow day. But she chose the second path to show her love to Fu Heng.

Fu Heng worries about Wei Yingluo’s body, but he doesn’t have pride to help her. He sees her fainting at the street, and is in pain. Yuan Chunwang knows she cannot convince Wei Yingluo, and wants to acompany her. But she refuses it.

Er Qing tells Ming Yu that she isn’t a maid anymore after marrying to Fu Cha family, and persuades to marry off herself. But Ming Yu wants to take care of empress, and thinks Er Qing is changed.

Emperor carries Wei Yingluo to his room after she passed out. He is lost while seeing her face, and withdraws his hand when remembering empress tought he fell for Wei Yingluo. Mr. Li knows emperor fell for her, and laughs with other eunuchs.

Wei Yingluo is startled after maids dressed her up into a imperial concubine, and wants to leave. But the maids lock her up in the room, so she has to hit the door, and heads in emperor’s arms when he shows up.