In the 37-38th episodes of Story of Yanxi Palace Chinese Drama 2018 Recap, Wei Yingluo pretends to be a vanity after knowing emperor wants her to be his concubine. He has to send her to eternal palace to take care of empress. Er Qing abuses maid Qin Lian because she thinks she seduced her husband. But she finds out it was a misunderstanding then. 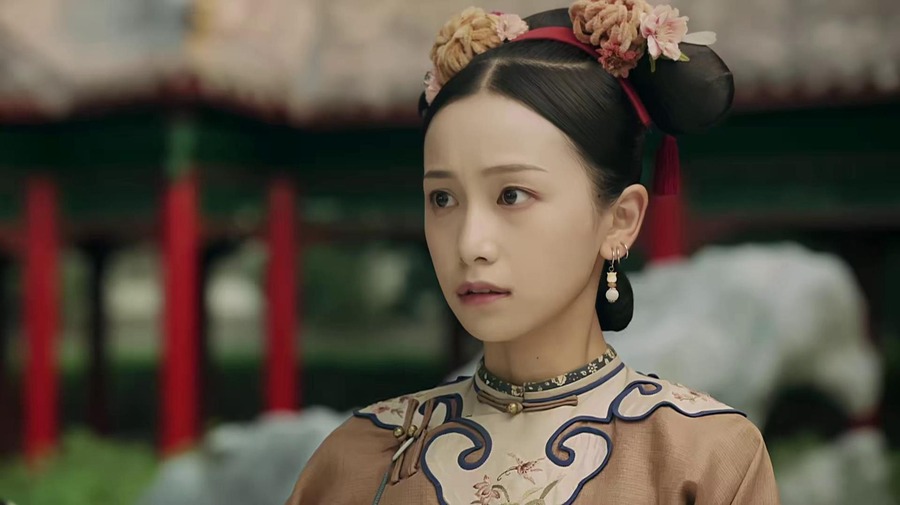 Note: From here on out there are specific plot spoilers for Story of Yanxi Palace Chinese Drama Episodes 37-38.

Wei Yingluo knows her dressing up isn’t right, and explains to emperor that the maids made the mistake while taking off her hair pin. He thinks it’s funny, and looks at her. She hesitates to take off her clothes or not, he tells her he falls for her.

She tells her that he isn’t interested in him, so he hugs her, and wants to kiss her. She pretends to be a vanity, and wants to be a imperial concubine. He lost the interest to her, and tells her that she isn’t worth to sleep with him. He says that he allows her to return to eternal palace as an ordinary maid.

Wei Yingluo thrills to return to eternal palace, but empress hides herself in the room, and doesn’t want to go outside. So Wei Yingluo keeps crying out to ask her out, empress opens the door, and says she is a disabled person. Wei Yingluo tells her that she wants to take care of her in her life, as she was nice to her.

Er Qing runs into Fu Qian at Fu Cha family, and knows his mother is a concubine, so he didn’t get enough love. She takes his poems, and claims they have same interest. He is embarrassed to run away.

She hears the eunuch of Household Bureau, and wants to take revenge reducing her salary. The eunuch is scared, and fears the punishment. She arranges Yuan Chunwang to Household Bureau. Fu Heng runs into Wei Yingluo at the eternal palace. He is cold to her, as if he didn’t love her. Empress persuades him to live well with Er Qing since he married her. He knows what she means, and claims he will treat Er Qing well.

Fu Qian falls for Er Qing, and peaks at her frequently. Qin Lian picks up sachet which Wei Yingluo gave Fu Heng while cleaning up, and keeps it. Er Qing sees Qin Lian takes the hair pin, and thinks her husband is cold to her for Qin Lian. She hits her with burned sheet iron, and pulls out her nails. Fu Heng’s guilty goes away after seeing abused Qin Lian, and claims he won’t fall Er Qing.

Qin Lian returns sachet to Fu Heng, and begs him not to sell out her. He realizes that she was abused for helping him, and decides to keep her. He tells Er Qing not to step into his study.

Er Qing gets tea for Fu Heng to apologize after knowing the hair pin is for him. But he says he won’t forgive her, and fights with her to leave. She wants to keep him, but is pushed over by him.

Er Qing goes to eternal palace to ask empress a favor since Fu Heng ignored her. Ming Mi isn’t happy about Er Qing’s return, and thinks she is changed. But Wei Yingluo points out that her natural is such. Er Qing cries out in front of empress, and asks to stay at the palace. Empress promises her request.

Er Qing asks Wei Yingluo to clean up stuff for her, and beats her. Wei Yingluo fights it back, and thinks that they’re servants in the palace. Hu Po gets medicine for Er Qing, and tells her emperor falls for Wei Yingluo.

Er Qing gives empress the giving birth pill, and persuades her to keep her position with the baby. Ming Yu thinks it inappropriate, but Er Qing claims it comes from imperial physician, and asks her not to tell Wei Yingluo. Hu Po asks Er Qing about the pill, Er Qing tells her the pill is real.

Imperial physician finds out empress is pregnancy, Wei Yingluo is scared as the medicine she gave her has effect of contraception. She guesses Ming Yu and empress concealed her to give birth, and is curious of why empress has to get baby. Yuan Chunwang reminds her the most important thing in the palace is prince.

Emperor is sad to leave Imperial Concubine Chun’s palace, because it’s the prince Young Lian’s death anniversary. He is drunk to visit empress’s palace, and runs into Wei Yingluo. He mumbles that she is annoying. Empress walks outside after hearing his voice, he touches her stomach thinking Young Lian is going to return.