In the 39-40th episodes of Story of Yanxi Palace Chinese Drama 2018 Recap, empress commits suicide because of losing her baby. Wei Yingluo thinks her death is because of emperor, so emperor orders her to kill herself to accompany empress. But he gives up after knowing empress’s last wish is to save Wei Yingluo. 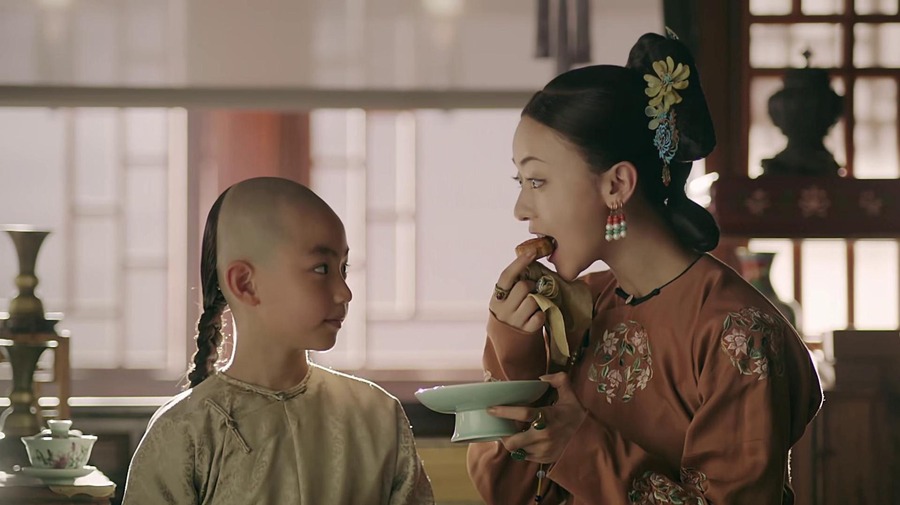 Note: From here on out there are specific plot spoilers for Story of Yanxi Palace Chinese Drama Episodes 39-40.

Er Qing sees drunk emperor, and recalls the words Fu Heng shamed her. She decides to seduce emperor to take revenge for her husband. She bribes Hu Po, and dresses up into a normal maid, sneaking into emperor’s palace. Emperor regrets, and knows he was framed by Er Qing.

Ming Yu finds out Hu Po looks weird when she takes another woman’s bra, and guesses emperor slept the maid. She tells Wei Yingluo about it, but Wei Yingluo thinks emperor will tell empress if he slept her maid. Er Qing thrills returning home after she took revenge for Fu Heng. She sees Fu Qian is peeking at her painting, and tells him to keep it.

Empress is in pain while giving birth, Wei Ying is sad remembering her dead mother because of giving birth. Fu Heng goes to block her eyes to comfort her, but he is cold when remembering their past. Emperor thrills seeing the his new prince, but Imperial Concubine Chun is upset. Imperial Concubine Xian knows she will help her to deal with empress. Emperor gives the baby a name of Yong Zong, and wishes he can inherit his throne.

Fu Heng returns home, and knows Er Qing is pregnancy. He knows the baby didn’t comes for him as he never sleeps her. He goes to blame Er Qing, but she doesn’t feel shamed, and says the baby belongs to emperor. He thinks emperor won’t do such thing, so she admits that she framed emperor. He cannot believe it, and locks her up. Fu Qian thinks she just hurt herself, but Er Qing doesn’t care.

Wei Yingluo’s father wants to see her, she doesn’t see him because of his ruthless. But empress persuades her, so she decides to go outside to see her father. But it’s Imperial Concubine Chun’s stratagem to take her away, so she can deal with empress. She sets a fire at the eternal palace, and burns the prince Young Zong.

Emperor knows his prince is dead, and asks his followers to investigate it. But Hai Lancha gets nothing, so he orders to kill all of attendants who watched on Young Zong.

Emperor asks Empress if Yong Lian still wants to be his son. Li Yu tells Emperor to return to Yangxin Palace to have a rest because he thinks he’s drunk. Emperor hits Li Yu and tells him that he wants to accompany Empress. Empress tells Li Yu to let Emperor stay in her palace as she worries that he will catch a cold.

Wei Yingluo tells Ming Yu to rest at the east side palace, and she will help Empress return to her room. Empress tells Wei Yingluo that Emperor never forgets Yong Lian like her. Wei Yingluo tells Empress not to think about it, and thinks she needs more rest.

Wei Yingluo asks Ming Yu if the east side palace is arranged well. Ming Yu says that she told the servants to avoid Emperor as he’s not happy. Er Qing remembers what Fu Heng told her that she won’t never be match for Wei Yingluo, and her malignity makes him feel sick.

The maid shows the hangover soup to the servant. He lets her walk into the room. Li Yu asks the servant if he checked the maid. The servant says yes and wants to take a look when there’re voices of the woman. Li Yu stops the servant and thinks it’s the maid’s honor when Emperor sleeps with her.

Ming Yu asks the maid if she sent the delivered the hangover soup. The maid says that she did it. Li Yu sees Er Qing running out from Emperor’s room, and he’s shocked. He goes to greet Emperor. Emperor rages to tell Li Yu to get lost while throwing his shoe to him.

Ming Yu stops Hu Po and asks her what she’s doing. Hu Po tells Ming Yu that Li Yu asked her to clean up what Emperor vomited. Ming Yu asks Hu Po why she’s so nervous. Hu Po runs away when Er Qing calls Ming Yue. Er Qing tells Ming Yue that she’s going to leave palace, and thinks she shouldn’t stay there since Fu Heng is going to leave Beijing. She tells her to inform her when Empress gives birth.

Empress tells emperor that she doesn’t want to be the empress anymore after losing her baby. He orders his followers to tie her up, and reminds her the duty.

Mr. Li reports to emperor the process of Young Zong’s funeral, emperor decides to host the funeral in person. But military situation is urgent, so he has to give up. The maid tells Er Qing that empress lost her baby, Er Qing decides to hit empress making her husband pain.

Emperor consults with Fu Heng about the military situation, but Fu Heng asks him to let his sister rest at her home. But emperor disagrees, and thinks he should focus on his job.

Er Qing wants to see empress, Ming Yu doesn’t agree until Er Qing begs her. Wei Yingluo doesn’t know what happened in the palace because she needs to take care of her father. Empress sends Ming Yu away because she wants to eat something, but she walks to city wall, and commits suicide.

Wei Yingluo returns palace, and hears the knell. She is shocked after knowing empress is dead. Emperor asks his followers to dress up empress at her funeral. But Wei Yingluo thinks empress doesn’t like it, and wishes he can let her go quietly. But he doesn’t forgive empress as she committed suicide for cowardice. Wei Yingluo points out that empress risked her life to bring Young Zong to the world is to complete his wish of crown prince.

Emperor asks Wei Yingluo to commit suicide to accompany empress, but Ming Yu is furious as she thinks he doesn’t understand empress. Emperor sees empress’s suicide note, and knows her only wish is to protect Wei Yingluo, but she didn’t leave a single word to her as she hated him. So he sends Wei Yingluo to watch on empress’s grave.

Imperial Concubine cuts the last candle after empress died, the candles mean her enemies. Yuan Chunwang visits Wei Yingluo since she is upset because of empress’s death.