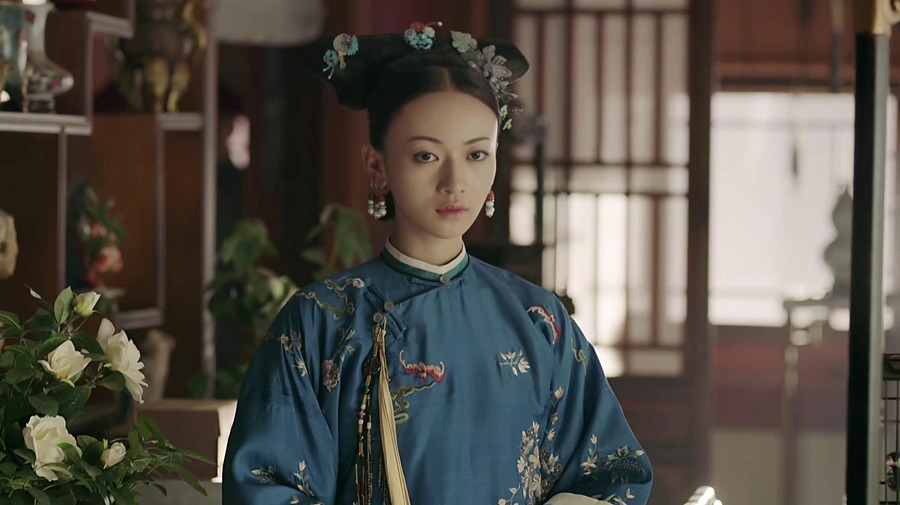 Note: From here on out there are specific plot spoilers for Story of Yanxi Palace Chinese Drama Episodes 17-18.

Imperial Concubine Gao is frustrated after emperor didn’t get the evidence, but she still suspects empress hide something. Wei Yingluo still wants to investigate her sister’s death, but Fu Heng persuades her to give up because he doesn’t want her to risk her life. She promises him to be careful.

Ming Yu plays urheen, and annoys others. Wei Yingluo takes her urheen away, and fights with her. Emperor tells empress to restrain Wei Yingluo, and sleeps with her. The next day, he doesn’t want to leave. But empress persuades him not to spend too much time on her body.

Wei Yingluo has to take out empress’s gold seal illegally, and is seen by emperor. He doesn’t know how to do until she takes the baby, and claims he is emperor’s son, although the baby is sick.

The maid asks Consort Gao for forgiving and thinks she didn’t do the job well. Consort Gao says that she didn’t expect to take down Empress with the rumor. She just wanted to take revenge. The maid regrets that Emperor didn’t find anything.

Hai Lancha gives the duty list to Wei Yingluo. He leaves as Fu Heng has something to tell Wei Yingluo. Fu Heng tells Wei Yingluo not to check the duty list, and reveals the men aren’t just Emperor and the bodyguards that day. She asks him what he means.

Fu Heng tells Wei Yingluo that Emperor invited royals to his party. He thinks the one who killed A Man doesn’t want to let the thing spread. He tells her that she will be in danger if she continues looking into it. She gets his points and thanks him for reminding her.

Fu Heng tells Wei Yingluo to give it up. She asks him what he will do if something happens on Empress. She tells him that she was close to her older sister like him and Empress. She says that she will risk her life to find the truth. She has to die if he asks her to give up. He asks her what she wants to do. She thinks there would be clue if someone left from the banquet.

Wei Yingluo thinks she will find the murderer if she looks into it. Because Emperor and the servants who were on duty would remember it. Fu Heng tells her that he will look into the servants of the Qianqing palace. He tells her not to take action while grabbing her hands. He says that he will tell Empress to drive her out of the palace if she doesn’t promise him. Wei Yingluo promises Fu Heng not to be rash.

Empress stares at the palace and wonders what Emperor is doing. Er Qing thinks Emperor is working. Empress sighs and reveals Emperor was happy after getting the calligraphy from Consort Gao. She adds that he changed the study into precious study. She says that she wants to take a look.

Wei Yingluo gives a bowl to Ming Yue with a penny, and makes her look like a beggar. Ming Yue thinks Wei Yingluo is a jerk. She is furious to chase her. Emperor stops the two and asks who allowed them to play and fight in the Changchun palace.

Wei Yingluo and Ming Yue are scared to get on knees. Emperor blames Wei Yingluo for treating her as treasure since she’s so unbridled. Empress comforts him that they just wanted to make her happy. She tells Ming Yue and Wei Yingluo to leave, and asks Emperor why he came.

Emperor says that he wanted to take a walk but came to Empress’s palace. She prepares the meal for him. He tells her to eat with him. But she reminds him the rule that concubines cannot eat with emperor. He thinks she still follows etiquette like before. She tells Er Qing to close all of the windows as she worries that Emperor will catch a cold.

But Emperor stops Er Qing and says that he has a chest distress. Empress persuades him that he will get a cold easily if he gets blown by wind.

Emperor tells Empress that he doesn’t want to go to court sometimes. She holds his head and tells him not to be lazy if he wants to be a good monarch. She thinks it’s her fault. He asks her why he doesn’t want to go to court is related to her. She says that she has the duty to persuade him. He mentions what he said to her that he feels tired for her because she keeps thinking so.

Empress thinks each person should do the things she should do. She says that she should take the duty as a concubine, and thinks it’s not tired at all. He hugs her and tells her that he knew she’s a good person. He says that he doesn’t find any flaw from her, and feels proud of owning a empress like her.

Empress says that she feels guilty for getting the praise from Emperor. She thinks she has lacked too many things in the past three years. He shakes his head and tells her that he believes in her that she will do everything well. She nods. He gives her a kiss and decides to go to court. She sees him off. He asks her to take care of Consort Yu as she’s going to give birth. She comforts him that she will tries her best to do that.

Ming Yue is furious to cut the flowers. Er Qing stops Ming Yue and hints her that it’s the flowers Empress likes. Ming Yue complains that Empress didn’t accept her kindness since she tried her best to consider for Empress. She adds that Empress insisted on picking up Consort Yu to her palace, and thinks she got herself troubles.

Er Qing comforts Ming Yu that Consort Yu will be fine. Ming Yu says that it’s not related to their master even if Consort Yu gives birth well. She thinks the first one will be the servants if the master brings a trouble. Er Qing blocks Ming Yu’s mouth and tells her not to talk nonsense.

Emperor decides to invite the most famous doctor Ye Tianshi to see the 5th Prince, Ye Tianshi reveals the Prince just get jaundice after diagnosis. Imperial Concubine Gao admits her sin, and emperor doesn’t punish her.

The maid visits Imperial Concubine Gao’s father Gao Bin, and wishes him to save his daughter. Emperor is satisfied with Gao Bin’s achievement of fixing riverway, and promotes him. He doesn’t ask emperor a favor for his daughter, but he wants to see her. Emperor agrees it since he is the father.

Imperial Concubine Gao hates her father because of her mother’s death, and is furious after knowing he wanted to send her stepsisters to palace. She swears she won’t let her stepmother get what she wants, but Gao Bin mocks at his daughter that she is dumb.

She sets up an opera for emperor, and cries out that her father got marry soon after her mother passed away. He promises her not to accept her stepsisters as imperial concubines.