In the 43-44 episodes of Story of Yanxi Palace Chinese Drama 2018 Recap, Wei Yingluo becomes Imperial Concubine Lin, and the master of Yanxi Palace after hooking emperor. Fu He wins the battle, and returns palace. But he finds out his lover is emperor’s woman now. 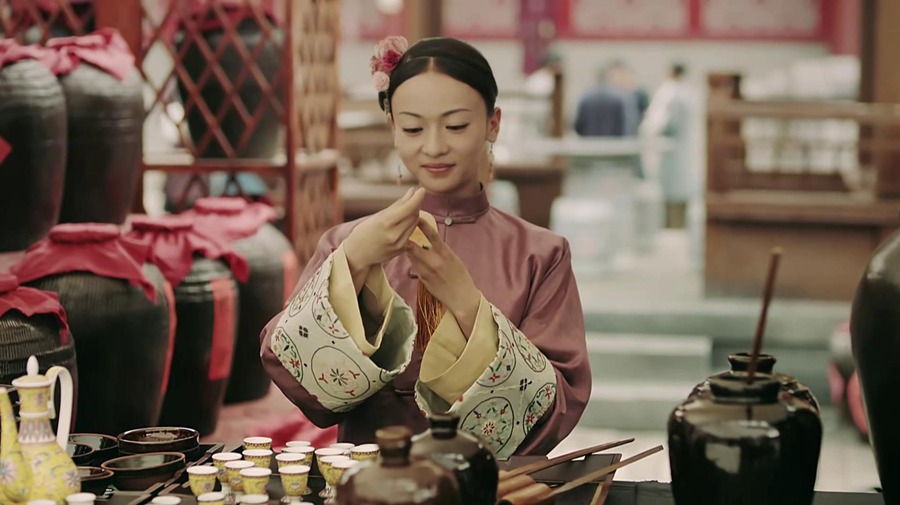 Note: From here on out there are specific plot spoilers for Story of Yanxi Palace Chinese Drama Episodes 43-44.

Ming Yu is furious because Hu Po embarrassed her master, but Wei Yingluo endures it as she knows Hu Po was instigated to provoke her. She goes to see queen for award, and disguises as a man to make queen laugh. Emperor sees her, and pretends to blame her. But he is used to see her at his mother’s place, and goes to Yanxi Palace after knowing she got sick. Story of Yanxi Palace episode 43 is so good.

Wei Yingluo guesses emperor is going to arrive, and asks Hu Po to serve her. Hu Po thinks she lost emperor’s favor, and is cold to Wei Yingluo. Emperor sees it, and scolds Fu Po. This is what Wei Yingluo wants, Fu Po gets punished, so that others maids won’t slight her.

Nalan Chunxue imitates Wei Yingluo to get queen’s favor, but emperor ignores it, so she is disappointment. Emperor worries about Wei Yingluo after knowing she is sleeping at the pavilion. She is waken by him, and finds out he carries her. He sleeps with her since he falls for her.

Ming Yu feels guilty after knowing emperor slept with Wei Yingluo as she won’t stay at the palace if she didn’t tell her the truth. But it’s not fair to dead empress if Imperial Concubine Chun doesn’t get punished. Ming Yu cries out at the corner, and Hai Lancha claims he will help her.

The concubines are jealous of Wei Yingluo since she keeps sleeping with emperor, and go to greet empress, except Wei Yingluo. So they badmouth her, and empress thinks it’s funny to see they fight for emperor’s favor. Just then Wei Yingluo arrives, and reveals she is late because she gathered dew for empress.

Emperor waits Wei Yingluo until midnight, and Ming Yu tells him she went to see queen. He feels wronged to leave since queen is his mother, but he decides to stay at the Yanxi Palace because he misses her.

Wei Yingluo knows her plate was cancelled, and plays on the swing. Emperor goes to Yanxi Palace since Wei Yingluo didn’t visit him. He leaves with anger after seeing she was playing on the swing. Ming Yu thinks Wei Yingluo is mischief, but Wei Yingluo keeps laughing. Emperor is furious by Wei Yingluo, and invites Ye Yianshi to see him. Ye Tianshi tells him that she got sick because of being punished to kneel. Emperor realizes that he misunderstands her, and gives her a lot of awards.

Emperor wants to get along with Wei Yingluo, but he has his pride. So he asks Mr. Li to hint her. But she doesn’t want to give in, and pretends to get sicked. Emperor is furious, and claims he won’t choose her plate anymore. The concubines think Wei Yingluo lost emperor’s favor, but they don’t know it’s her plan.

Wei Yingluo gives the painting which emperor gave her to queen, and queen gives it to emperor. Emperor is furious after seeing it, and scolds Wei Yingluo. But she points out that she had to give queen since she liked it. He thinks she was intention to make him miss her. She has to admit it, and emperor gives her the title of Imperial Concubine Lin.

Fu Heng returns after winning the battle, and his mother tells him that Er Qing was almost dystocia when being locked up, and takes out Fu Kangan to see him. Fu Heng has to conceal Fu Kangan’s story for the reputation of Fucha family.

Er Qing is happy to see Fu Heng, but he wants to visit Wei Yingluo. Er Qing tells him that Wei Yingluo is Imperial Concubine Lin now, and he collapses to go to palace. He runs into Wei Yingluo who sits on the sedan chair without any emotion.

Fu Heng’s dream is broken since he fought with enemies is to get married with Wei Yingluo, but he lost her forever. Emperor calls Fu Heng, and asks him what award he want, and claims anything will do. Fu Heng asks him if it’s really anything. Emperor is embarrassed, and changes his words to give him the title of nobility.

Fu Heng is frustrated, and stays in the study. Qin Lian goes to cheer him up, but he isn’t happy. He remembers his sister’s words, and realizes that Wei Yingluo was far away from him since he agrees to marry Er Qing.