In the 57-58th episodes of Story of Yanxi Palace Chinese Drama 2018, Consort Lin and queen has to leave palace because empress wants to kill them. Emperor realizes that he misunderstands his mother, and asks for forgiving. But queen leaves still, and asks Consort Lin to write letter to emperor. 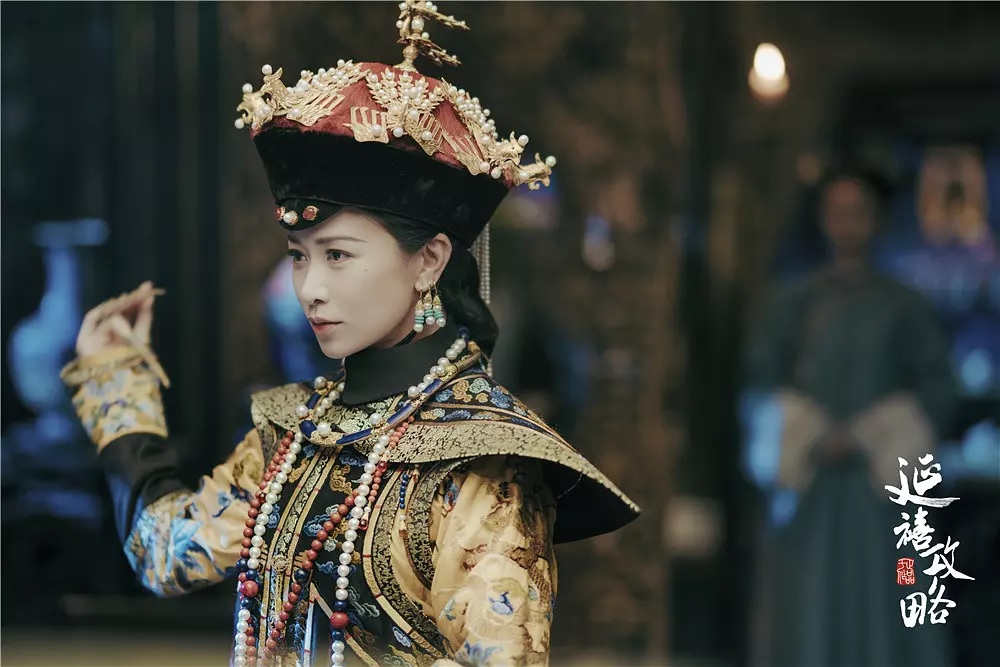 Note: From here on out there are specific plot spoilers for Story of Yanxi Palace Chinese Drama Episodes 57-58.

Queen tells emperor that his birth mother took her hand, and asked her to take care of him. He claims to investigate it, and leaves with a cold expression. Queen worries about it, but Consort Lin comforts her, and says that he is a filial.

Emperor suspects his story, and tells empress about it. The testament is made by empress to frame queen, so empress pretends to be nice wife, and hints him that queen killed his birth mother to get him. He is moved, and suspects queen. Hai Lancha tells emperor that the minister who sent painting to him is his birth mother’s relative. Emperor decides to see the minister, but the minister is dead of unseating. Emperor thinks queen wanted to silence the minister.

Queen is sick but emperor doesn’t see her. Empress takes care of queen, although she hates her most. Queen knows she hates her for killing her father, and framed her. Queen is furious to break the teacup. Empress tells queen that her nephew is arrested because of corruption, and will be killed. Queen tells empress that she killed her father is to protect the country, and thinks empress took revenge with selfishness. Empress doesn’t regret, and blames queen. Queen is furious to get stroke.

Ye Tianshi sees the prescription, and tells queen that she will die if she takes medicine according to the prescription. The maid thinks Birthday Palace isn’t safe, and suggests Consort Lin to leave. But Consort Lin wants to protect queen because of her kindness, and returns Yanxi Palace. Imperial Concubine Qing visits her, and takes the prescription. She tells her that she is good friend of Nalan Chunxue, but she is looking for another path. Consort Lin thinks she is a nice person, and promises to help her get promoted.

But emperor finds out Minister Wang’s words are different to what queen said, and asks him to speak out the truth. Minister Wang tells emperor that his birth mother was killed by previous to protect his name. Emperor knows he wronged queen, and goes to ask for her forgiving. But she leaves palace with Consort Lin.

Queen tells Emperor that his mom closed her eyes when she promised to raise him. He asks her if what she said is true. She tells him to think about if she slighted him ever. She adds that she treated him as pearl to hold in her hands, and asks him if she did it for letting him question her.

Emperor thinks what Queen said is right, and admits that he was abrupt. He asks her for forgiveness. She asks him why the death letter of Wen Shu hasn’t been taken out in the past ten years. She thinks the letter was faked. She adds that the person’s goal was to be alienation of their mother and son relationship.

Queen tells Emperor that the person knew he would rage after seeing the letter as he’s a good son. He tells her that he will look into the case, and thinks it was his fault to startle her. He leaves. She fails to keep her and thinks it’s over when Consort Lin supports her with her hands.

Consort Lin gets on knees and tells Queen that he didn’t intend to bug it. She tells her that Emperor won’t hate her because she’s not his real mom. But Queen points out that Emperor wouldn’t get angry just because of the letter. She worries the content of the letter isn’t simple.

Emperor visits Empress. She tells Zhen Er to leave after she noted that he’s upset. She tells him to tell it to her if he meets any problem as they’re wife and husband. He says that he doesn’t know how to speak it. She comforts him that she will be there to accompany him no matter what he will say. He tells her that the case is related to his origin. He adds that he doesn’t know who he should trust.

Empress is surprised that Queen said so, but she doesn’t want to be speculation of Queen with bad intention because she’s his mom. He tells her that he wants to hear the truth. She reminds him that the previous emperor wouldn’t choose Niu Kulu clan if he wanted to look for a mom who was born to be noble.

Emperor says that Queen told him that she was asked by Ms. Qian. Empress thinks there would be fights if Ms. Qian was weak and couldn’t raise the kid. She says that she cannot imagine that Queen stood out and became the mother of Emperor, and nobody has questioned her in the past ten years.

Empress thinks there was a drama the palm civet exchanged the crown prince happening in the Prince Yong’s palace. Emperor thinks Madam Wenshu was right that Queen killed his mom to get him.

Hai Lancha asks Ming Yu if Consort Shu bullied them. She says that nobody can look down on Consort Lin because she keeps accompanying Queen. He thinks Shoukang Palace isn’t a safe place, and tells her to persuade Consort Lin not to be close to Queen. He worries that she will get involved.

Ming Yu asks Hai Lancha why, and thinks he won’t tell her because it’s a confidence. He denies and tells her that it’s related to the origin of Emperor. He says that the person who knows it will be in danger. He thinks Consort Lin will know it because she sticks to Queen.

Ming Yu reports to Consort Lin that Emperor suspects Queen was the murderer who killed Madam Qian. She adds that Hai Lancha asked her not to visit Shoukang Palace. The servant thinks Hai Lancha was right. He adds that the wind direction of the palace has been changed. He thinks they should steer right away.

Hai Lancha tells Emperor that he questioned the servants who worked in the prince palace, and there is one person who remembered the princess Madam Qian. He adds that Madam Qian became the prince’s daughter after she took care of him.

Emperor asks Hai Lancha if Madam Qian had a family. Hai Lancha reveals Qian Zhengyuan is her older brother, and he was the minister who gave him the Chunhui Painting. Emperor takes a look at the painting, and thinks Qian Zhengyuan wanted to remind him that the person he should repay isn’t Queen. He summons Qian Zhengyuan.

The maid tells Queen to come up with a plan, and thinks her effort will be ruined if Emperor meets with Qian Zhengyuan. Queen passes out. Hai Lancha reports to Emperor that Qian Zhengyuan fell off the horse and died. Queen wakes up and tells the maid that she was just out of breath as there was a huge rock on her heart. She asks her about Emperor.

The maid tells Queen that Emperor is busy and he will see her when he’s free. Queen points out that he would take down his business to visit her even if she just coughed. She adds that he doesn’t care for her when she’s sick. Empress shows up and tells Queen that she misunderstood him. She adds that Emperor cannot leave because the ministers have a meeting at Xinuan palace.

Empress says that Emperor worried about it after he knew Queen is sick, and he got her to serve her. Empress takes over the medicinal soup from the maid, and tells Queen to drink it. Queen asks Empress if she sent the letter to Emperor. Empress says that she didn’t have the guts, and reveals the letter was sent by Prince He.

Emperor sees queen off, and feels guilty. Queen isn’t sick, and wants to let empress down her guard. Queen is pleased to tell Consort Lin that emperor will hate her if he knows she and Imperial Concubine Qing framed him, so she takes her to leave. Consort Lin finds out queen is very sly, and asks her about the truth of emperor’s birth mother’s death. Queen smiles, and asks Consort Lin what you think. Consort Lin feels chilly.

Empress realizes she failed after knowing queen took Consort Lin leaving, but she thinks she still has chance. Yuan Chunwang persuades empress to kill queen and Consort Lin since he hates her most. But empress says that it has big risk because empress misses queen, and isn’t intention to deal with Consort Lin. She thinks there isn’t any space for Consort Lin when she returns.

Consort Lin writes letter to emperor, and reports to him about queen’s condition. Queen knows her son will miss Consort Lin after she left. Consort Lin knows when to push, and when to pull.

Yuan Chunwang becomes the ruler of Household Bureau in empress’s help, and empress has two princes. He runs into a maid who is similar to Consort Lin, the servant arranges the maid to serve. But Yuan Chunwang finds out the maid is too soft, and drives her away. He tells the servant not to mind his business.

Queen asks Consort Lin to write letter to emperor as she fears he forgets her. Although he hates Consort Lin, but he misses his mother. So he has to read the letter. Their relationship is firm through the letters. Queen doesn’t want to return even if empress has princes. Empress doesn’t urge queen, because they’re enemies. She catches the chance to gain more power. Fu Heng returns after winning the battle.

Queen tells Consort Lin that it’s time to return to palace, and Consort Lin has the intention as well. Fu Heng visits Consort Lin, and suggests her to replace empress. But she hesitates until he tells her there is a new imperial concubine got emperor’s favor, and her name is Chen Bi.

She asks Ming Yu to pack her stuff, and says goodbye to queen. Yuan Chunwang visits her, and tells her empress wants to discuss something with her. Consort Lin knows they wants her to deal with Chen Bi, and refuses empress. But empress doesn’t get angry, and tells her that she has to leave again if Chen Bi gets emperor’s favor. Consort Lin doesn’t agrees until sees Chen Bi. Empress is pleased, and promises to help Consort Lin get promoted.

Ming Yu doesn’t understand why Consort Lin changed her mind. Consort Lin sighs, and looks at herself from mirror, hope she has a face like Chen Bi. Ming Yu laughs, and thinks Consort Lin falls for emperor. Empress tells emperor that Consort Lin lives tough at outside, and he thinks about something after hearing it.