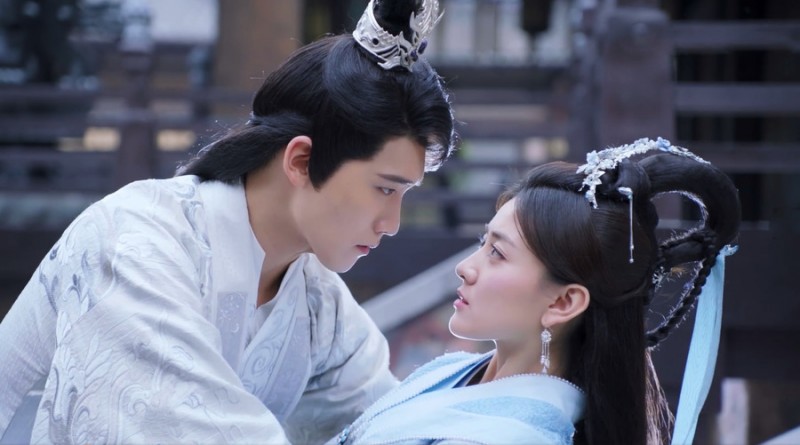 In the 3-4th episodes of The Eternal Love 2 Chinese Drama Recap, Qu Xiaotan finds out Eighth Prince has same looks to Mo Liancheng, but he doesn’t know her at all, and becomes her master. She tries to approach him, but Eighth Prince thinks she is interested in his token of emperor. 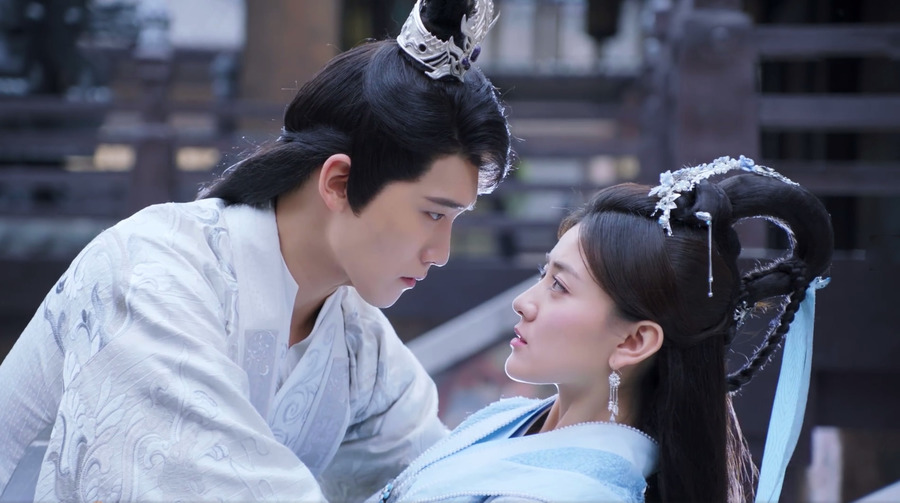 Note: From here on out there are specific plot spoilers for The Eternal Love 2 Chinese Drama Episodes 3-4.

Qu Xiaotan is lost when sitting in bed, and Jing Xin feeds her with porridge. She asks Jing Xin to take the mirror for her, and sees that she is blurry through the mirror. She remembers the hd camera, and photoshop. She knows the person she gets in, and has stepmother and stepsister. She and her stepsister love same man.

Qu Xiaotan knows she is just a person which everyone can bully her, and decides to flee through climbing over the wall. But she falls on ground. Eighth Prince sees what she did, and he is a stranger to her this time.

Qu Xiaotan asks passerby about weird thing which happens at Dong Yue, but she gets nothing. Mo Liancheng wears bamboo hat following her. She dances at the street to get the sugar man, and people follow her. Eighth Prince thinks it’s interesting, and a line of cavalrymen rush to her. Mo Liancheng wants to save Qu Xiaotan, but he finds out that another him taking action in advance. He realizes that he returned his hometown, and met himself.

The cavalrymen break into Qu family, and arrest everyone. General Wei announces that Qu Jianglin is sent to borderland because he took bribes, and Qu Taner becomes the maid of Eighth Prince. Qu Taner doesn’t marry Eighth Prince, and Mo Liancheng is shocked. He thinks his arriving brings butterfly effect, so everything is changed.

Qu Xiaotan and Jing Xin are scolded by steward, because they’re maids now. She finds out Eighth Prince’s looks is similar to Mo Liancheng, and wants to approach him. But she is blocked by maids, and steward punishes her to clean the floor. Mo Liancheng finds Liu Qianshu, and points out his identity. He asks Liu Qianshui to change looks for him, and knows Dong Yue is in danger. He decides to help his father to get rid of the potential risk, and takes Qu Xiaotan to return to her hometown.

Qu Xiaotan approaches Eighth Prince through cleaning his room, but he thinks she is unbridled when she talks to him. Just then Yu Hao says that Queen wants to see Eighth Prince, so that Qu Xiaotan avoids to be punished. Eighth Prince asks Yu Hao about Qu Xiaotan, and knows Elder Prince loves her. Mo Liancheng breaks into the prince’s house, and walks to Qu Xiaotan who is cleaning floor. She remembers Yu Hao’s warning, and bows to him. But Mo Liancheng hugs her from back.

Mo Liancheng feels relieved since Qu Xiaotan is safe. He tells her not to be reckless, and she is shocked that he is so different than before. She nods, and remembers his hugging. She makes sure the person is Mo Liancheng.

Queen tells Eighth Prince that Qu family’s case is conducted by Consort Du Gu. She asks him to take care of Qu Taner, and promotes her. He doesn’t understand it, but promises it.

Qu Xiaotan blocks Eighth Prince’s way, and claims that she agrees him to be her boyfriend. He is confused, and thinks she doesn’t follow the rules. But he tells Yu Hao to promote her to be female director.

Consort Du Gu’s country was destroyed by Dong Yue, she wants to regain her country since Elder Prince lost his position, and Emperor is controlled by soul medicine. Qu Xiaotan blinds Eighth Prince’s eyes when he is study, and tells him that she fell for him when he saved her, in addition, he has sexy voice, and is very rich.

Eighth Prince thinks she talks nonsense, and blames her that she isn’t etiquette. She thinks he just doesn’t want to give up the prince’s position, otherwise he will go back with her. Just then steward breaks into, and takes her away.

Qu Xiaotan is confused by Mo Liancheng’s attitudes, and doesn’t believe that there are two similar persons in the world. Jing Xin opens the door, and finds a box on the floor. Qu Xiaotan opens the box, and finds a letter which tells her not to flirt with strange males. She is confused.

Qu Xiaotan sneaks into the room where Eighth Prince is taking a bath. He suspects her since she approached him many times, but he is confused since she isn’t interested in emperor token. She encourages herself to take off his clothes, but she doesn’t find any sign on her chest. She is frustrated since Eighth Prince isn’t Mo Liancheng, and is sad because she has to be the maid at there forever.