These are the Recap & Ending for The Interest of Love K-Drama: Episode 5. Jong-Hyeon’s father receives the money from Jong-Hyeon. He blames his son for sending the money to him. Jong-Hyeon tells his father that he got a job from KCU Bank. He adds that he moved to a new house.

Su-Yeong Cleans Out the Filing Room 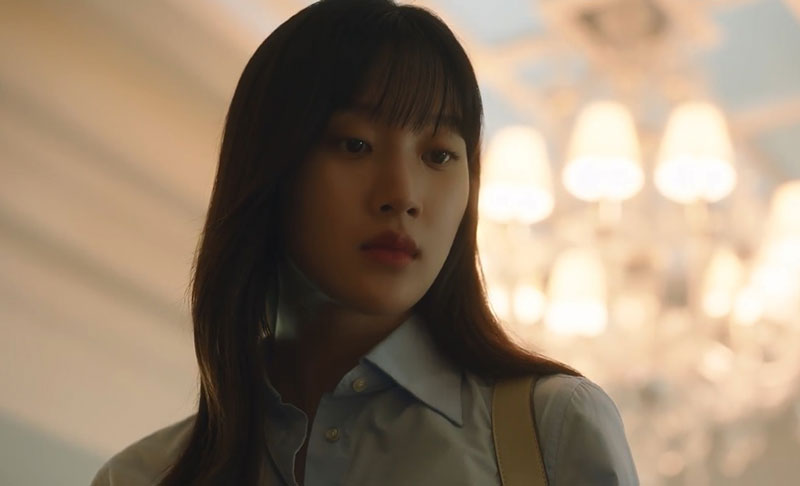 Note: From here on out there are specific plot spoilers for The Interest of Love K-Drama: Episode 5.

Du-Sik sees Jong-Hyeon. He thinks he’s the new employee. He shakes hands with him. He asks him if he’s an actor. Jong-Hyeon denies it. He reveals he wants to be a cop. Ku-Il shows up. He tells Du-Sik to go to buy him medicine. Du-Sik promises it. But he asks Jong-Hyeon to complete the task for him.

Su-Yeong is against it. She reminds Su-Sik that the medicine is the locker room. He walks away. She greets Jong-Hyeon. He runs into her at the convenience store when she drinks the wine. He tells something to her. It makes her smile.

Sang-Su asks Su-Yeong would she date him if he came to the hotel. She tries to give her answer to him. But his friend calls him. She picks up her phone and walks away. The guy tells Sang-Su that he wants to date Su-Yeong before he gets married. Sang-Su tells the guy that Su-Yeong has a boyfriend.

Sang-Su goes to see Su-Yeong. He finds out that she’s talking with Jong-Hyeon over the phone. He returns to the hotel and thinks of Su-Yeong. Su-Yeong is on the bus with Sang-Su. She asks him why he left yesterday. He reveals he saw her talking with someone over the phone. He feels sorry for making her feel uncomfortable. She denies it and asks for a meeting up because she wants to continue the talk. He agrees to it.

Mi-Gyeong texts Sang-Su. She asks him to call her. Gyeong-Pil shows up. He takes out the sandwich from the fridge. Mi-Gyeong reminds Gyeong-Pil that the sandwich expired. But he thinks it’s fine because it just expired yesterday. She smiles because she thinks he hasn’t changed. She wonders why he talked formally. She tells him to talk comfortably.

Sang-Su shows up. Mi-Gyeong asks Sang-Su why he didn’t pick up her phone. He explains that he was drinking. She believes that it would be fun. He denies it and asks her what happened. She mentions their classmates are going to get married.

Su-Yeong tries to walk to Sang-Su. But she sees him staying with Mi-Gyeong. The client tells Su-Yeong that his wife has dementia. She gives the device to him. She tells him that he will find his wife if he wears the device on his wife’s hand.

Shi-Kyung asks Su-Yeong to go to see the client with him. She agrees to it and texts Sang-Su that they have to meet next time. Eun-Jung sees Su-Yeong off. She wonders why Shi-Kyung always takes Su-Yeong to see clients. Min-Hee points out that Su-Yeong wasn’t happy to accept the task. Eun-Jung thinks Su-Yeong could reject it. Tae-Pyung thinks Eun-Jung knows nothing about discipline.

Du-Sik believes that Su-Yeong got something from the meeting. Min-Hee blames Su-Sik for badmouthing Su-Yeong. She thinks Su-Yeong is a victim. But he thinks she protected Su-Yeong too much. Shi-Kyung and Su-Yeong meet with the Punggyeong Products VIP at the restaurant. Su-Yeong tries to recommend a product to the VIP. He’s not happy. She refuses to pour him a drink. Shi-Kyung has to do the job for Su-Yeong.

Seok-Hyeon tells Sang-Su and Gyeong-Pil that he’s going to get married. Sang-Su mentions Seok-Hyeon just met the girl. Seok-Hyeon thinks he can date the girl after he gets married. He tells his friends that he has made the decision even if he knows he will regret. Gyeong-Pil asks Seok-Hyeon to buy them a meal. Seok-Hyeon agrees to it.

Shi-Kyung bows to the VIP and sees him off. Su-Yeong wants to leave as well. Shi-Kyung mentions Su-Yeong offended the VIP. She claims that she just did her job. He reminds her that her job is to entertain the clients when she’s at the meeting. He hands over the cash to her. He tells her to take a cab with the cash. She tries to reject it. But he forces her to accept it. Su-Yeong returns home. She puts the cash into the box. She remembers Shi-Kyung asked her to accept the cash. She gets a message from Sang-Su who asks for a meeting up.

Su-Yeong walks to Sang-Su. She hands over the receipt to him. He asks her if the meeting ended late. She admits it and walks away. Ji-Yoon sees the photo of Shi-Kyung and a woman. She believes that the woman is Su-Yeong. Shi-Kyung asks Su-Yeong to go to see the client with him again.

Shi-Kyung agrees to go to see the client alone. But he asks Su-Yeong to clean out the filing room. Mi-Gyeong volunteers to help Su-Yeong. But Shi-Kyung is against it. He asks the people not to help Su-Yeong. Jong-Hyeon walks into the filing room when Su-Yeong is cleaning out the room. He tells her that he wants to help her. But she rejects it because she worries that Shi-Kyung will punish Jong-Hyeon.

Sang-Su walks into the filing room. He wants to help Su-Yeong as well. She mentions what Shi-Kyung told him to focus on his job. She tells him that she’s fine. He mentions the message he sent to her. She explains that she went to sleep because she was tired. He intends to wait for her. But she tells him to leave. She regrets for what she said after he actually left.

Sang-Su walks out of the bank. He sees someone ordering the food from the seller. He buys the food and places it on Su-Yeong’s desk. Su-Yeong returns to her office. She sees the food. She gets a message from Jong-Hyeon. She mistakes that the food was bought by Jong-Hyeon.

Sang-Su eats at Jung-Im’s place. She reminds him that it’s not a restaurant. She mentions he comes to her place often. He explains to her that he was bored. She doesn’t believe it because there’re many beauties at the bank. He wonders why she didn’t date a guy. She reveals she dated many guys when she was young. She believes she doesn’t need a boyfriend.

Jung-Im tells Sang-Su that she got married with his father even if she loved someone more than his father. She tells him that he will have children if he follows his heart. He asks her to apply the ointment on her hands. She complains that she doesn’t have a husband who can provide shade for her.

Mi-Seon tells Mi-Gyeong that her friend had a fight with her husband. She tries to show the photo to her. But Mi-Gyeong reminds her mother that she’s eating. Mi-Seon thinks her daughter takes after her husband. She complains that monks talk more than Dae-Sung.

Mi-Gyeong tells Mi-Seon to go to see her friends if she wants to talk. Mi-Seon mentions what she said that her friends are busy in fighting with their husbands. She shows her clothes to Mi-Gyeong. She tells her to paint them. Sang-Su texts Mi-Gyeong. He reveals he’s going to go to play golf. She wants to join him.

Dae-Sung asks Sang-Su to play with him. Shi-Kyung points out that Sang-Su is just a beginner. Dae-Sung offers to give a handicap to Sang-Su. Sang-Su rejects it. He tells Dae-Sung to think about his proposal if he defeats him. Dae-Sung agrees to it.

Sang-Su gives a tip to Dae-Sung when Dae-Sung plays golf. Dae-Sung feels happy after he won. He picks up the ball from the hole. He walks to Sang-Su and asks him if he’s actually a beginner. He believes that he would lose even Sang-Su didn’t give the tip to him. But Sang-Su tells Dae-Sung that he learned a lot from him.

Dae-Sung hands over his business card to Sang-Su. He tells him that he wishes to play golf with him next time. He asks him to bring the proposal to him when he comes. Shi-Kyung praises Sang-Su. Mi-Gyeong shows up. She tells Dae-Sung and Shi-Kyung that she came to take Sang-Su to the wedding.

Sang-Su tries to introduce Mi-Gyeong to Dae-Sung. But she ignores Dae-Sung and walks away. Sang-Su asks Mi-Gyeong why she ignored the important client. She reveals she didn’t greet the client at home. She adds that the client is her father.

Su-Yeong’s hand is hurt when she cleans out the filing room. She gets a call from her mother. Sang-Su and Mi-Gyeong arrive at the wedding place. Sang-Su runs into his friends. Mi-Gyeong leaves. Sang-Su stares at the bride. He mistakes the bride as Su-Yeong. The guy asks Sang-Su if he wants to get married.

Episode 5 of The Interest of Love K-Drama ends with Su-Yeong walking into the office. The colleagues are staring at her. Shi-Kyung is furious to break into the office. He calls Su-Yeong and walks to her. But Sang-Su blocks Shi-Kyung’s way to protect his lover.