This is the recap for Chinese drama The Romance of Tiger and Rose: Episode 4. Qian Qian tells Su Mu not to flatter her and treat her as friend. He tells her that he cannot accept the reward. But she points out that the gift she gave out shouldn’t be taken back, and she goes to talk with Lin Qi.

The Romance of Tiger and Rose: Episode 4 Recap 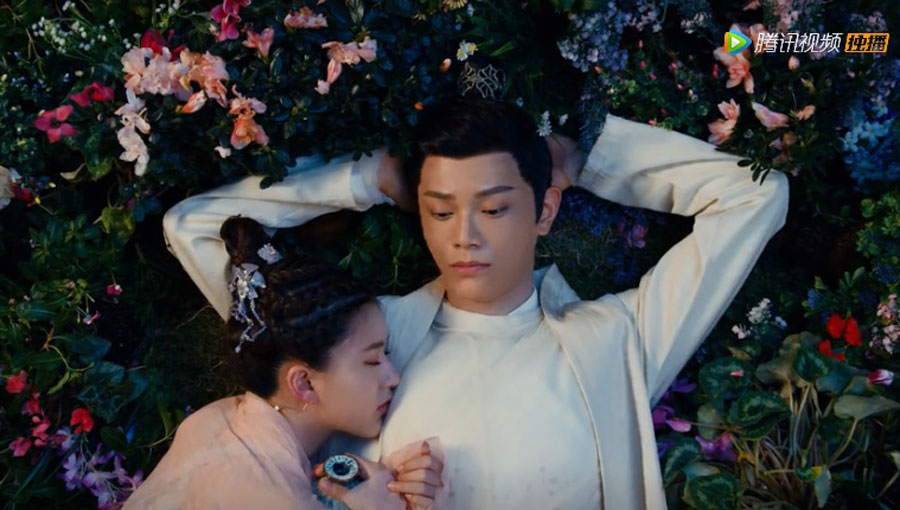 The Romance of Tiger and Rose: Episode 4 Still

Lin Qi learns that Qian Qian wants to buy Su Mu, and thinks Han Shuo isn’t nice. Qian Qian tells Lin Qi that she wants to return freedom to Su Mu. She tells her not to look down on Han Shuo.

Lin Qi points out that Su Mu doesn’t have any place to stay, except Qian Qian’s place. Qian Qian tells Lin Qi that it’s not her business.

Bai Ji wonders why Qian Qian was against Lin family for a musician. Han Shuo thinks Qian Qian is cute and kind. He intends to get the musicians to leave Lin Qi.

The musicians are sent to moon mansion. Lin Qi is furious and tries to whip Qian Qian. Han Shuo takes away the whip and gives it to Qian Qian. He remembers she liked to use whip. But Qian Qian returns the whip to Lin Qi.

Qian Qian tells Lin Qi to take away the musicians, and she only keeps Su Mu. But Lin Qi tells Qian Qian to keep the musicians as Han Shuo stepped on himself for Qian Qian. Qian Qian laughs.

The musician visits Han Shuo, and tells him to ask everything about rose city. But Han Shuo only asks what Qian Qian did when she went to women club.

Sang Qi tells Rose City Chief that Chu Chu keeps the musicians, and Rose City Chief feels disappointed. Bai Ji tells Han Shuo that Qian Qian got a Chinese zither, and thinks she will give it to him. Han Shuo feels happy and tells Bai Ji not to leak that he’s not good at playing zither.

Bai Ji sees Qian Qian and Zi Rui taking the Chinese zither, and reminds her that Han Shuo is there. But she says that she will give the zither to Pei Heng. Bai Ji gets on knees and asks Han Shuo to give him another chance.

Pei Heng tells Qian Qian that he doesn’t like zither. She thinks he shouldn’t care for people’s thoughts, and tells him to think about keep Su Mu.

Yuan Yuan tells Qian Qian that she’s dislocated and she will be in pain when she uses power. Zi Rui reveals Qian Qian didn’t say anything when she fell from the roof. But Qian Qian’s scared when Yuan Yuan treats her.

Han Shuo confesses to Qian Qian that he fell for her, and cures her shoulder. Bai Ji reports to Han Shuo that the spy wants to tell something to him. Han Shuo lets the spy in.

Pei Heng brings the fruits of tiger city to Qian Qian, and he wants to prepare some fruits for Han Shuo. Qian Qian rejects it and thinks it will make Han Shuo miss his family.

Zi Rui tells Qian Qian that Han Shuo just left, and she thinks she is done and wants to hold the birthday party for Han Shuo.

Zi Rui tells Qian Qian that the men of tiger city like shoes from women. The two go to the shoes stores, but the store owners close the door. Qian Qian wonders why people fled when they saw him.

Zi Rui reveals Qian Qian owes the money of the stores, and she tells them that she will give cash. The store owners welcome her.

Qian Qian measures Han Shuo’s shoes, and she finds the bamboo tube. Han Shuo catches her and mistakes that she suspects him. She hugs him to measure his chest. He wonders why she hugs him since he wants to kill her.

The shop owner brings tons of bamboo tubes to Qian Qian, and Zi Rui accepts it for Qian Qian.

Han Shuo sees the clothes and shoes Qian Qian prepared for him, and realizes why she hugged him. He laughs. Qian Qian shows up and says happy birthday to him.

Qian Qian tells Han Shuo that she knows that he has heart disease, and persuades him not to give up. She tells him to smile, and promises to take the night with him.

Qian Qian is drunk, and falls on the flowers with Han Shuo. She tells him that she will tries her best to cure him. He says that he finds the way, but he doesn’t want to do so.