This is the Recap & Ending for Why Her? K-Drama: Episode 4. Gong Chan remembers Soo-Jae kissed him when the classmates talk about Soo-Jae. Yoon-Sang wakes Gong Chan up. Soo-Jae remembers she kissed Gong Chan as well. She feels regret for doing it to him. 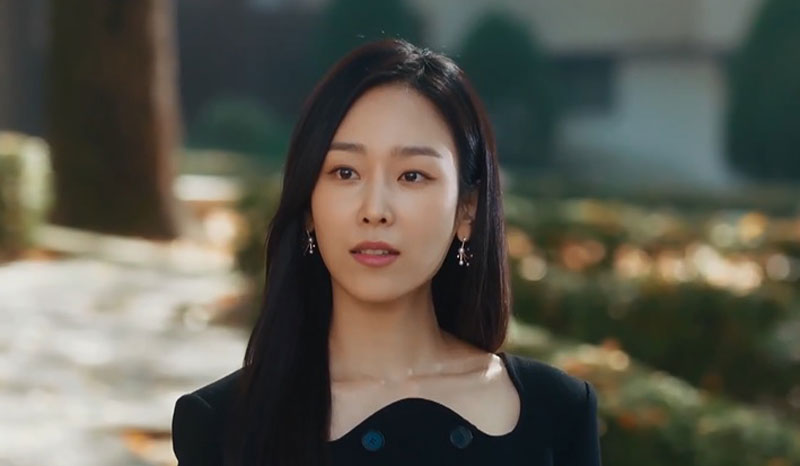 Note: From here on out there are specific plot spoilers for Why Her? K-Drama: Episode 4.

Jin-Ki meets with Soo-Jae. He wonders why So-Young took her life on the rooftop of TK Law Firm. Mi-Rim waits for Soo-Jae at the bus stop. She gets in her car and shows the photo to her that So-Young’s boss is a friend of Sung-Beom and Tae-Kook.

Mr. Ko calls Soo-Jae. He tells her that he found something. She goes to see him. He hands over the paper to her. She finds out that So-Young was pregnant. He gives her the papers he found from the flash drive. She laughs after she read the papers.

Soo-Jae walks out of the police station. She gets a call from Mi-Rim who tells her that the accountants betrayed them. Young-Bae sees Soo-Jae getting in the elevator. He finds out that she went to the Presidential Suite. He reports it to Hee-Young. She tells him to take a photo of Soo-Jae and the man after she walks out of the Presidential Suite. She’s confidence that she will replace Soo-Jae at the law school.

Se-Pil tells Soo-Jae that he wants to ruin the three. He hands over the photos of Sung-Beom and another woman to her. He believes it will help her. Young-Bae takes a photo of Soo-Jae and Se-Pil after they walked out of the Presidential Suite.

Young-Bae tells Hee-Young that Soo-Jae met with Se-Pil who’s very rich. It makes Hee-Young upset. Gong Chan hears the talk. He gets a message from the classmate who tells him that Soo-Jae summons them. Soo-Jae tells the students to look into Ji-Young. She admits that she reported Ji-Young.

Chun-Poong wonders why Soo-Jae wants to help Ji-Young after she hurt her. She tells him to find the truth. She smiles to tell Gong Chan that she never trusted her clients. She tells the students to find the evidence which can help her convince the judge. She leaves the meeting room.

Mi-Rim places the note Soo-Jae got on the table. She tells the students that Ji-Young told Soo-Jae that someone stole her phone when Soo-Jae asked Ji-Young about the location of the phone. She thinks the one who stole the phone was the killer. She tells them that Soo-Jae is a good person.

Mi-Rim leaves. The students think Mi-Rim said that because Soo-Jae is her leader. But Chun-Poong takes Mi-Rim’s side. Gong Chan sits on the stairs of the sports field. He remembers what Soo-Jae said that she never trusted her clients. But the Soo-Jae he knew told him that she trusts him.

Soo-Jae drinks at the restaurant. Joon-Hee joins her. Soo-Jae smiles to pour Joon-Hee a drink. She smiles to drink with her. She tries to tell her that she kissed a man. But Joon-Hee doesn’t hear it because she’s drunk to fall asleep.

Soo-Jae sees Gong Chan. She laughs after he told the restaurant owner that he has feelings for a girl. He reveals he felt hurt when the girl said something bad to people. But he can understand why the girl did that. The restaurant owner realizes that Gong Chan loves Soo-Jae very much. She points at the man. She tells Gong Chan that she loves the man very much as well.

Joo-Wan visits Soo-Jae. He tells her that Young-Bae saw her getting into Se-Pil’s room. He throws the photos to the table. He asks her about the deal she made with Se-Pil. She tells him that she just ate a hamburger with Se-Pil. He asks her to give the papers to him, proving that she didn’t betray them. But she rejects it. He leaves her office. She gets a call from Tae-Kook.

Soo-Jae goes to see Tae-Kook. He tells her to help his son get a divorce. But she rejects it. He reminds her that she needs to do it because she got salaries from him. She promises to help Sung-Beom to sell his company. But she refuses to help Joo-Wan. She bows to him. She leaves his office.

Joo-Wan runs to welcome Jae-Yi. He carries her. Soo-Jae walks to Joo-Wan. She glares at him and tells him that she won’t help him because she knows he’s a bad person. Chun-Poong wants to fire the employee because he cannot remember the face of the man.

But the man rejects it. Because he doesn’t want to bring trouble. He mentions Chun-Poong and Se-Ryeon are not cops. They remind him that he will get more followers if people know he helps them catch the killer. Yoon-Sang meets with Il-Ku at the restaurant. He asks him why So-Young jumped off the rooftop. He believes Tae-Kook and Joo-Wan killed the girl.

Il-Ku denies it. Yoon-Sang pours Il-Ku a drink. Joo-Wan meets with Ki-Taek in the nightclub. He tells him that he will return the papers to him if he tells him what’s inside the papers. Ki-Taek leaks that there’s a USB flash drive. He’s drunk to fall asleep.

Joo-Wan throws Ki-Taek into the cab. He gives the cash to the nightclub owner. Soo-Jae shows up when Ki-Taek is playing with his children. She tells him that she knows he concealed the evidence in the USB flash drive because he wanted to protect himself.

Why Her? K-Drama: Episode 4 Ending

Soo-Jae walks into the house. She calls Gong Chan and tells him to come. But she gets attacked by the killer. The killer throws her to the glass door. She’s hurt.