This is the recap for Eternal Love of Dream (Three Lives, Three Worlds, The Pillow Book): Episode 13. Chief Eunuch reports to Xuan Ren that Xiao Jiu found the falling water girl. Xiao Jiu dresses up and walks out to see Xuan Ren, and asks him to forgive her for cheating him. 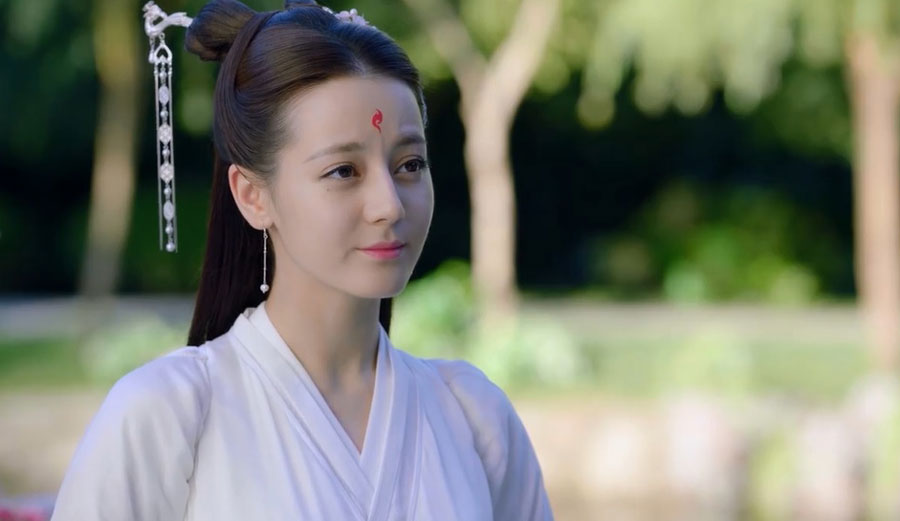 Note: From here on out there are specific plot spoilers for Eternal Love of Dream: Episode 13.

Xuan Ren laughs and asks Xiao Jiu why she confesses. She says that she doesn’t want him to step in the cold palace which is with hopeless and cold. She asks to stay by his side, and he thinks the ornament on Xiao Jiu’s forehead looks like an unfolded phoenix feather.

Feng Jiu reveals the ornament is the birthmark she’s had since she was born, and she used cosmetics to cover it as she worried that it would bring her the trouble while walking alone.

Xuan Ren thinks Xiao Jiu did a great job, and tells Chief Eunuch to give the title “Beauty” to Xiao Jiu. But Chief Eunuch is against it as they know nothing about Xiao Jiu’s background.

Si Ming reminds Xiao Jiu that Dong Hua will remember nothing after taking the misfortune. She promises not to mess up Dong Hua’s misfortune, and he tells her not to get involved in love too much.

Queen heard that Xuan Ren took a new concubine, and he explains that Xiao Jiu saved his life ever. Xuan Ren wants Xiao Jiu to stay in the palace. Queen agrees to it but asks to postpone the conferring ceremony.

Xiao Jiu picks Mu Yun as her personal maid, and thinks the butterfly mark behind her neck is quite special. Mu Yun reveals that the birthmark feels warm when she wakes up after having a dream.

Mu Yun adds that the girl saved her life in the dream. Feng Jiu realizes that Mu Yun was the Mufeng butterfly, and gives her the hairpin. Feng Jiu asks Mu Yun to prepare a basin of water, and Mu Yun mistakes that Feng Jiu intends to take bath with Xuan Ren.

Xuan Ren draws Feng Jiu and wants to sleep over in her palace. Feng Jiu takes bath in the bathtub, and reminds herself that Xuan Ren isn’t Dong Hua. She is surprised to see Xuan Ren.

Xuan Ren tells Xiao Jiu that they’re husband and wife. He wants to get her parents to move in the city, and she says that her parents have been traveling around the world.

Xuan Ren thinks Feng Jiu is prettier than Zhu Wan, and reveals he fell for her while seeing her in the water. Feng Jiu tells Xuan Ren not to stare at her as she cannot resist the beauty.

Xuan Ren laughs and says that Feng Jiu is the first one who dares to call him beauty. Feng Jiu tells Xuan Ren that she has caught a cold and she needs to rest for two days. He has to leave. Chief Eunuch asks Xuan Ren if he wants to visit Zhu Wan. Xuan Ren rejects it. You can also check out Eternal Love of Dream: Episode 14.

Xuan Ren sees Feng Jiu roasting sweet potatoes, and wants to eat it. She shares the sweet potato with him, and reveals she’s loved the flavor after she ate the roasted sweet potato someone specially made for her.

Xuan Ren thinks the person isn’t simple. Feng Jiu says, “In fact, memories in our mind can be deceptive. After a long time, even if I rack my brains, I can only find a few shared memories with him. To me, I treasure those memories so much that I’ve even formed ideas that I shouldn’t have, which turns into obsession. But things will be different if I can relive those good memories by eating. Such a feeling will become an instinct. Just like tasting mom’s cooking for the first time in early childhood, I still find it familiar after recalling it many years later. Just like the sweet potato he roasted for me, however chaotic and disturbing the world is, as long as I think of that flavor, I feel relieved and happy.”

Xuan Ren wants to see the person, but Feng Jiu tells him that he is far away.

The maids talk about Feng Jiu and think she wetted herself and bumped into Xuan Ren on purpose for tempting him. The bodyguard scolds the two maids. The man worries that Feng Jiu will do something bad on Xuan Ren. Qing Ti tells the man not to stay by his side if he suspects Feng Jiu.

Ling Xiang reports that she looked into Lingxiao pavilion, and Lingbi stone wasn’t there. Ji Heng realizes that the only place they haven’t searched is Xuan Ren’s chamber. Ling Xiang tells Ji Heng to do something on Feng Jiu. Ji Heng puts the note on the pigeon and releases it. But Mu Yun catches the pigeon and reads the note.

Xuan Ren visits Zhu Wan and finds the memorial tablet she carved for her mother. He tells her that his mother passed away after he was born, and promises to celebrate Zhu Wan’s birthday with her.

Zhu Wan goes to pay her respect to Queen, but runs into Ying Prince. He tells her that he came to see her, and she reminds her not to touch her as she is the woman of Xuan Ren. Ying Prince recites the texts Zhu Wan wrote.

Zhu Wan tells Ying Prince that it’s just a simple letter, and he points out that Xuan Ren won’t believe it as it was ent by a flying pigeon. He tells her that he wants to be her friend. Ling Xiang asks what Ying Prince meant.

Zhu Wan thinks Ying Prince isn’t a good person, and thinks they shouldn’t take action. But Ling Xiang points out that Chu Yin cannot wait it anymore. Zhu Wan tells Ling Xiang that she won’t stop her if she has ability to get in Muyun palace.

Xuan Ren has meal with Zhu Wan, and she plays zither for him. But Chief Eunuch reports to Xuan Ren that Feng Jiu passed out.