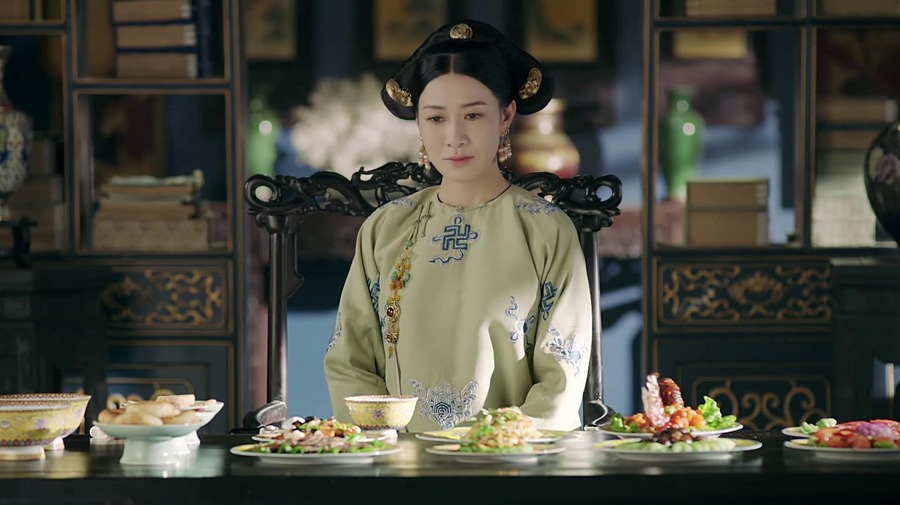 Note: From here on out there are specific plot spoilers for Story of Yanxi Palace Chinese Drama Episodes 41-42.

Er Qing is dissatisfied after knowing her husband is going to go to the battle, Fu Heng knows she is afraid of losing her position. She asks him for releasing her, but he says he will let her become a nun if he cannot return.

Qin Lian tells Fu Heng not to join the army, and persuades him to consider his mother. But he wants to win the feats, so that emperor will give Wei Yingluo to him. He goes to Old Summer Palace to see her, and leaves.

Emperor has to give title of empress to Imperial Concubine Xian since queen keeps persuading him. Empress tears up while looking at herself from the mirror, and remembers her mother died in front of her.

Queen is going to visit Old Summer Palace, Wei Yingluo is happy as she will see Ming Yu soon. But Ming Yu scolds her in front of Imperial Concubine Chun. Wei Yingluo thinks she looks weird as she won’t be ruthlessness like that.

Yu Hu fears Wei Yingluo investigates it, and sends assassin to kill her. But Wei Yingluo prepares it in advance, so the assassin pretends to be a thief. But she points out that he takes knife, and lets the servant to arrest him.

Emperor goes to worship empress, and finds out the pastry looks weird. Wei Yingluo tells him that empress visited her dream, and wants to eat the pastry. But the pastry is only made by Ming Yu. So emperor asks Imperial Concubine Chun for Ming Yu.

Wei Yingluo tells Ming Yu that she won a day of time for her, and Ming Yu shows the wound to her. Wei Yingluo hurts her wrist to invite Ye Tianshi to see Ming Yu, and finds out her body is stabbed by silver needles.

Wei Yingluo decides to take revenge empress, but Ming Yu persuades her to give up as they’re in low positions. She chooses emperor as her patron since she cannot stay with Fu Heng together anymore.

She asks Hai Lancha a favor to approach emperor, he promises her since she is Fu Heng’s lover. She visits Yuan Chunwang with food, and feels guilty since she is going to quit. He doesn’t know her intention, and asks her to accompany him in her life.

Queen likes the bird Wei Yingluo raises, Wei Yingluo tells her that she is a phoenix. Imperial Concubine Chun thinks she is intention to catch queen’s attention, and wants to punish her. But Wei Yingluo claims queen’s sincerity moved God, and lines up the Koi fishes into the word of birthday. Queen is joyful to award her, but Wei Yingluo asks to take of care of queen.

Emperor thinks she has evil intention, and claims he is going to give the title of Da Ying to her. Queen helps her get the title of Imperial Concubine, so Wei Yingluo asks for Ming Yu. Emperor promises it.

Yuan Chunwang knows Wei Yingluo get queen’s favor is to approach emperor, and is furious to ask her leaving with him. But she refuses it. He hates Wei Yingluo and emeror, and turns his love into hate.

Emperor wants to sleep Wei Yingluo at empress’s palace, she knows he is intention to do it. He stays at the palace, and doesn’t go out. So she stays outside to eat pastries. So he has to let her in.

He lets her take of her clothes, and sees the mourning inside. She tells him that she treats empress as benefactor, and wants to mourn for her over 27 months. Ming Yu is moved after knowing Wei Yingluo wore mourning to sleep with emperor. But Wei Yingluo tells her that she did it to improve the relationship of emperor, because she cannot defeat Imperial Concubine Chun without emperor’s favor.