This is the Recap & Ending for A Romance of the Little Forest: Episode 1. Beauty Yu eats the bun in the van. The assistant wonders how Beauty Yu made her lipstick not be messed when she eats the bun. Beauty Yu takes off her hat. She tells the assistant that she just needs to open her mouth widely. 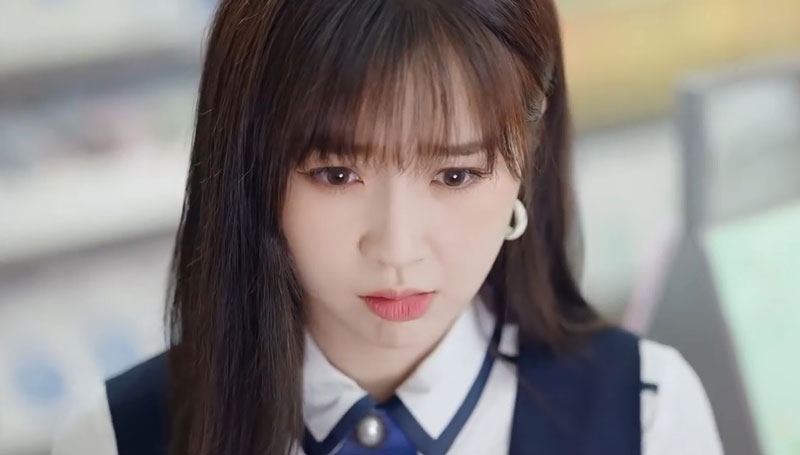 Note: From here on out there are specific plot spoilers for A Romance of the Little Forest: Episode 1.

The assistant mentions He Shi is a top brand. Beauty Yu doesn’t want to recommend He Shi because he didn’t master the color. She gets off the van. The photographer is waiting for her. He takes photos of her. Beauty Yu removes her makeup. She gets a call from Jin Xi who complains to her that she ran away after she had rejected He Shi.

Jin Xi mentions He Shi is the top brand. He tells Beauty Yu not to ruin her career. She tells him that she didn’t want to break her principles. She wishes to recommend La Mi. He tells her that nobody can handle it except him. She praises him. He reminds her that she need to go to Huaguang University. He tells her to complete the task of Sha Ye. She promises it. She wishes not to encounter old friends.

Zhuang Yu walks in the forest. He finds the herb. He tries to take the herb. But the wolf shows up. Zhuang Yu casts the knife to the wolf. The wolf runs away. Zhuang Yu drinks the tea by the lake. The colleagues talk about Zhuang Yu. They think he cannot make a girlfriend.

Zhuang Yu is working in the lab. The two guys show up. They ask Zhuang Yu about artemisia annua. Zhuang Yu reveals the herb is in the greenhouse. One of the guys thinks they’re going to succeed. But Zhuang Yu is ready for the failure.

Lao Li shows up. He mentions the line was said by Teacher Zhong. He tells Zhuang Yu not to work hard because the content of artemisinin isn’t more than three percent. Zhuang Yu swears to let China lead the world. He walks into the greenhouse. He sees the students.

Beauty Yu takes the lipstick to pose when Photographer films her. President Yuan shows up. She praises Beauty Yu for wearing makeup on her own. She thinks she’s a nature beauty. Beauty Yu denies it. She mentions She Ye made the girls like her to be beautiful.

The girl tells Zhuang Yu that she wants to learn how to plant flowers with him. It makes the classmates laugh. Zhuang Yu mentions artemisinin helps people deal with malaria. He tells the students to think about it before they make the decision.

Beauty Yu walks into the greenhouse. She slaps Zhuang Yu’s back. It makes him turn around. Her smiling is frozen after she saw his face. She asks him about the path. He tells her that there’s no path. She applies the lipstick on her lips. She unties her hair. She tells him that the path she wants to go is in his heart.

Beauty Yu blinks. She asks Zhuang Yu if he can sense her. She takes out the card from his pocket. She writes down her number on the card. She hands over the card to him. She tells him to call her. The shelf falls to the ground at that time.

Zhuang Yu sees the ruined herb. He walks to Beauty Yu. He takes over the card from her. She stands up and apologizes to him. She intends to help him. But he tells her to leave. She tells him that she wants to buy him a meal. She mentions he likes little buns. She walks to her and tells her to leave again. She takes her bag to walk away.

Zhuang Yu tries his best to save the herb. He tells Lao Li that it will affect the result because the sample was polluted. The assistant walks President Yuan. She tells her that she wishes to work with her next time. President Yuan agrees to it.

The assistant feels sorry for bringing the trouble to President Yuan. President Yuan points out that it was his employee’s mistake. Beauty Yuan asks President Yuan if the guy who stayed in the greenhouse is a teacher. President Yuan admits it. She comforts Beauty Yu that the footage will be pretty good. She shakes hands with her. She walks away.

Beauty Yu turns around. She sees Jin Xi getting off the van with a girl. Beauty Yuan tells the assistant Xiao Fang to leave. Jin Xi begs Beauty Yuan to help him with his hand. She walks to him and slaps his shoulder. The girl asks Jin Xi who Beauty Yuan is.

Beauty Yu introduces herself as Jin Xi’s mom to the girl. She cries to mention Jin Xi was engaged with President Wang’s daughter. She gets Jin Xi to bow to the girl. The girl is furious to walk away. Beauty Yu remembers Zhuang Yu told her that she’s very stupid.

Jin Xi reminds Beauty Yu to pick up the phone. Beauty Yu’s mom Madam Yu asks her to marry herself off. She tells her to go on a blind date. She reveals she sent a photo to her. Beauty Yu takes a look at the guy’s photo. She is against it because she thinks the guy has a girlfriend.

Jin Xi tells Beauty Yu that he can act to be her boyfriend. But she thinks he’s not match for her. She tells Xiao Fang to look for a house which is near the school. Jin Xi volunteers to pay the rent. Beauty Yu thanks her son. She takes a look at the photo of the house.

Beauty Yu thinks Zhuang Yu won’t reject the grapes. But he doesn’t come. She believes that he has a business. She walks in the rain and gets into the cafeteria. She hears Zhuang Yu telling his friend that he’s not interested in stupid girls. The grapes drop. Beauty Yu cries.

Beauty Yu wants to let Zhuang Yu know who is fool. She tells Xiao Fang to order Green Lake Apartment. The girl breaks into Jin Xi’s office. She tells him that she reports what he did to the employees in his company. He lets the secretary leave. He smiles at the girl and makes her a cup of coffee.

The girl tells Jin Xi that she knows Beauty Yu isn’t his stepmother because she saw the promoting photo of Beauty Yu. He tells her that he knows she got together with him for his money. She pours the coffee to his face. She thinks he knows nothing about true love. She wishes him not to get his love all his life. She’s furious to leave his office.

The secretary brings the towel to Jin Xi. He wipes his face with the towel. He tells her to guard the door well. She offers to replace the coffee maker with water dispenser. He agrees to it. Jin Xi walks in the rain. He remembers what the girl told him that he won’t get his true love all his life.

Li Tiantian shows up behind Jin Xi. She holds umbrella for him. She asks him if he didn’t take umbrella when he turns around to look at her. She gives her umbrella to him. She runs away. He smiles when he sees her off. He picks up the hearing aid she just dropped.

A Romance of the Little Forest shows the group photo of Li Tiantian and Beauty Yu to us. Beauty Yu gets a call from Li Tiantian when she’s packing her stuff. She blames her for not liking her post. Li Tiantian asks Beauty Yu if she wants to eat the grapes. Beauty Yu denies it.

Li Tiantian tells Beauty Yu that she will return home since she doesn’t want to eat the grapes. Beauty Yu realizes that Li Tiantian came to Shanghai. She turns around and sees her. She’s excited to run to her. She hugs her and takes her to get into her house.

A Romance of the Little Forest: Episode 1 Ending

Episode 1 of A Romance of the Little Forest ends with Beauty Yu telling Li Tiantian not to think about it too much. Li Tiantian takes out the group photo. She sees Zhuang Yu. She asks Beauty Yu if she still has feelings for Zhuang Yu. Beauty Yu denies it. She reveals she wants to prove that Zhuang Yu is a fool.

Beauty Yu tells Li Tiantian to find a way for her since she has watched many Chinese dramas. Li Tiantian tells Beauty Yu to make Zhuang Yu fall for her. Beauty Yu thinks it’s a good idea. Lao Li tells Zhuang Yu that the shelf fell down again. He thinks it wasn’t Beauty Yu’s mistake.