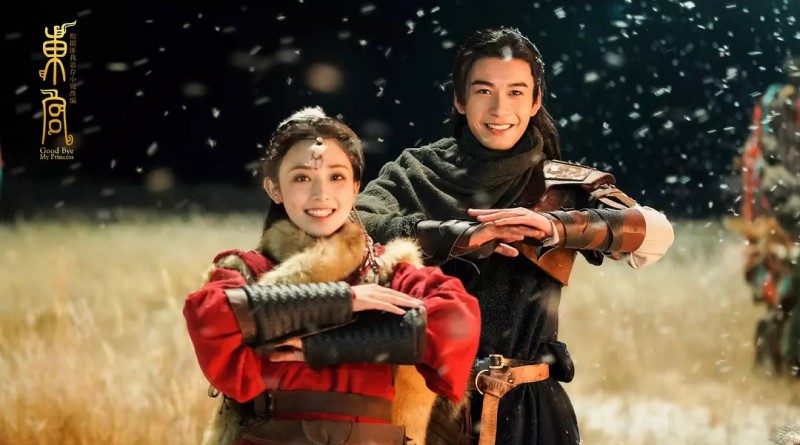 These are recaps of Goodbye My Princess Chinese Drama Episodes 11-12, Xiao Feng spots a deer and shoots him, but she almost kills Li Chenyin when he shows up. He tells her that he is emperor’s son, the fifth prince. She remebers Gu Xiaowu and falls off the horse. He hugs her when she passes out, and is confused.

Note: From here on out there are specific plot spoilers for Goodbye My Princess Chinese Drama Episodes 11-12.

Yong Ning and Luo Xi visit Xiao Feng and offer to play poker. Xiao Feng fails, so they punish her with fingers. Xiao Feng remembers they were attack by sand thief, and A Do is dumb. Empress Dowager wants to know more details about Ming Yuan from Xiao Feng, so she arranged a teacher for her. Yong Ning asks Xiao Feng which prince she wants to marry, but Xiao Feng isn’t sure because she didn’t see them.

Xiao Feng writes the letter and tells her parents that she will marry the prince no matter who he is, maintaining the peace of two countries. She seals the letter and asks A Do to send it to post. But A Do keeps the letter with tears.

Xiao Feng wants to go out with A Do but the guards stop them because Teacher Fang is waiting for them. Teacher Fang punishes A Do because Xiao Feng refuses to study etiquette. Xiao Feng has to obey Teacher Fang’s order. Se Se tests the brush at the market and runs into Li Chengyin, and he finds out that she wrote down his name “Yin”, and keeps it. The maid reveals Se Se was intention to wait him.

Li Chengyin visits his mother Empress Zhang, and she tells him not to be close to Se Se because her father Zhao Jingyu doesn’t have any power. He tells her that he just treats Se Se as friend. Teacher Fang asks Xiao Feng to place eggs on her armpit and takes steak with chopsticks. But Xiao Feng breaks the egg and grabs the steak to eat. Empress Dowager tells Teacher Fang not to be strict to ninth princess because her background is too miserable. She warns Yong Niang not to mention Dan Chi’s ruin and her mother’s passing away to ninth princess.

Yong Ning and Luo Xi visit Xiao Feng, and spots she wrote the text on her forehead. They want to take her to the hunt, Yong Niang reminds Xiao Feng that the text is still on her forehead. Zhao Jingyu tells his daughter Se Se to be close to Li Chenye with the hunt, but she likes Li Chenyin. He tells her that emperor won’t give the throne to Li Chengyin because of prime minister Gao Yuming.

Li Chengye introduces his brothers to Xiao Feng, and finds out Li Chengyin isn’t there. He is told that Li Chengyin goes out with Se Se. He wants to hunt with Xiao Feng, but she refuses it and wants to stay with Yong Ning. Yong Ning asks Pei Zhao to take care of Luo Xi, and he agrees. Li Chengyin finds Se Se and wonders why she doesn’t wear riding clothes. She explains that she cannot ride, and he promises to catch a rabbit for her. She tells him not to make the animals feel painful.

Xiao Feng spots a deer and shoots him, but she almost kills Li Chenyin when he shows up. He tells her that he is emperor’s son, the fifth prince. She remebers Gu Xiaowu and falls off the horse. He hugs her when she passes out, and is confused.

Zhao Jingyu introduces Se Se to Li Chengye. Li Chengyin asks for help while hugging Xiao Feng and running. Yong Ning tells Xiao Feng that Li Chengyin save her when she wakes up. Se Se asks her brother to teach her riding and shooting, and wants to ride with Li Chengyin. He thinks Se Se falls for Li Chengyin.

Teacher Fang tells Xiao Feng to bow first when getting married with crown prince. But Xiao Feng makes Teacher Fang’s nose bleed. Yong Niang teaches Xiao Feng the word “home” when she misses her hometown. But A Du tears up. So Xiao Feng asks A Do to write the text “home”, and A Do remembers her brother He Shi was shot.

Xiao Feng wants to go out of palace, so she and A Do ride Li Chengyin’s carriage and flee. Li Chengyin visits Mi Luo’s bar and meets with Se Se. Xi Luo is a spy of Xi Zhou. Li Chengyin grabs Se Se’s hands after reading the poetry she wrote for him. But he notices her hands are hurt. She tells him that she practiced riding, and wishes she can ride with him.

Xiao Feng and A Do meets with Mi Luo, and they become best friend. Emperor asks Gao Yuming for the advice about crown prince. Gao Yuming recommends Li Chengye. Emperor gives the title of crown prince to Li Chengye in the court, and prepares to marry him to Xiao Feng in 100 days. Teacher Fang wants to resign because Xiao Feng couldn’t recites woman’s rules after one month. Xiao Feng is scared and asks A Du to get tea for Teacher Fang.

But Teacher Fang finds out it’s vinegar, and wants to punish A Do. But she makes Xiao Feng pass out, and is scared to invite the doctor. She makes Yong Niang drop into water, and Yong Niang reveals Xiao Feng is going to marry Li Chengye. Xiao Feng tells A Do that she feels uneasy when staying with Li Chengye, and offers to get drunk with Mi Luo. But when they’re going to go out. Aunt Ying visits and brings the food of empress dowager, and warns Xiao Feng not to go outside because there is a thief in white at the palace.

Xiao Feng opens the window, and spots Gu Jian on the three. He sneaks into her room and thinks Xiao Feng shouldn’t marry a man she doesn’t love. A Do walks in, and Xiao Feng flees outside and calls the guards. When they return, Gu Jian disappears. Pei Zhao takes soldiers to search palace, and kicks people out of rooms. He stops the soldier when they arrive at A Do’s room.

Gu Jian shows up and asks Pei Zhao what happened. Pei Zhao reveals Lin Chengyin and Xiao Feng jumped off the Wang Chuan river, so they forgot their loves. A Do made the decision herself. Li Chengyin tells Gao Yuming that he will recommend Gao Xian to be North Marquis of Dan Chi. But Gao Yuming reminds Li Chengyin not to be North Marquis when Li Chengye became crown prince. Gao Kun mentions Li Yan is building the copper statue, and tells Li Chengyin to look into it.