This is the Recap & Review for Korean drama Graceful Family Episode 6. Wang-Pyo asks Seok-Hee if what she’s eating is good. She admits it, and thinks it tastes even better when she stays with him. He laughs, and she reveals that her mom doesn’t let her eat burgers. 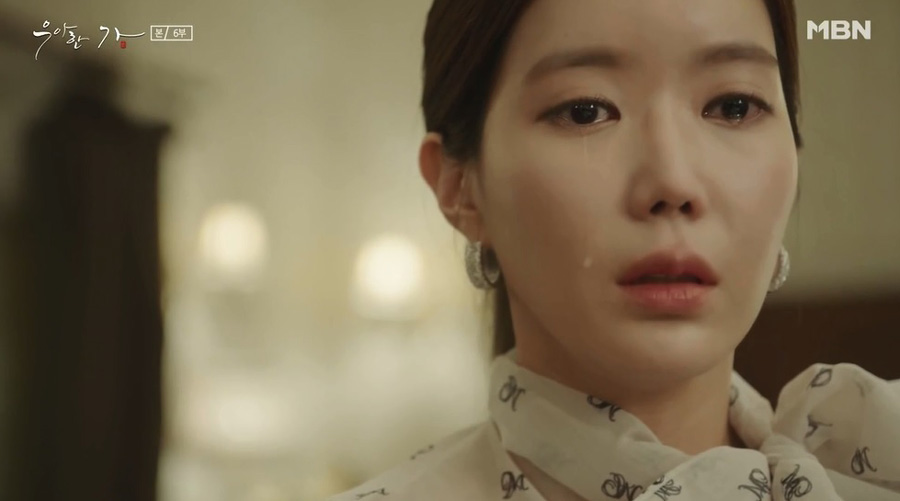 Note: From here on out there are specific plot spoilers for Graceful Family Episode 6.

Wang-Pyo tells Seok-Hee that she can do whatever she wants today. He asks her what she wants to do. She says that her friends go to soccer games with their fathers. He picks up the piece of the burger, and eats it up. She tells him that it’s dirty. But he says that her leftovers aren’t dirty.

Wang-Pyo asks Seok-Hee if she wants to go to the soccer field with him. He ties the shoes for her. Je-Kook spots it. Wang-Pyo meets with Seok-Hee’s mom Jae-Rim and thinks she has a hard time raising Seok-Hee without her father. She says that Seok-Hee is a very smart and kind kid. He thinks she is the rightful lady of the house.

Wang-Pyo tells Jae-Rim to move to the main house. He takes her and Seok-Hee to the Graceful Family, and announces that the rightful wife of the family is Jae-Rim. He tells her to move back into the house with Seok-Hee. She says yes with smiling.

Wang-Pyo tells Young-Seo to move out, and thinks Seok-Hee should move back in and receive proper education as the heir. But she says that she doesn’t think the studying will be fun. Cheol-Hee points out that they already have a son who’s the heir.

Wang-Pyo tells Cheol-Hee not being so archaic, and thinks gender doesn’t matter. He asks him if the two fit to be the heirs in his eyes.

Je-Kook sees that Wang-Pyo favors Seok-Hee. He says that she is a special child, and tells her that Seok-Hee’s the pillar of their family. He says that he will raise Seok-Hee to become the leader who will lead MC Group. He adds that Je-Kook is a female but she’s living like a male as well.

Je-Kook says that MC Construction is trying to obtain a large construction contract in Arab, and other party plans to consent under the condition that Cheol-Hee becomes the CEO. She adds that everyone in the MC Group believes that Cheol-Hee is the next CEO. She thinks it could be a vital blow to the growth of MC Group if he announces Seok-Hee is the heir. Wang-Pyo tells Je-Kook that he has already made up his mind.

The police stops Seok-Hee’s car, and tells her that there will be a brief sobriety test. She does the test, and he thinks she drank. She is surprised and tells him that she didn’t do it. He asks for her license.