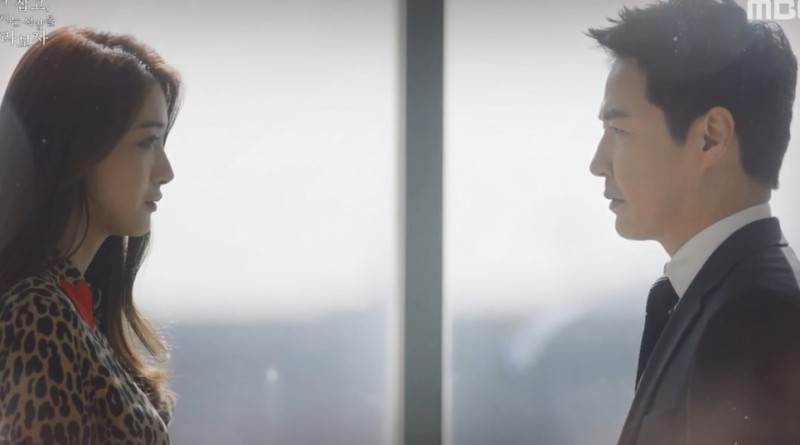 This is 1-2th episodes of Hold Me Tight Korean Drama, Hyun Joo (Han Hye-Jin) is shocked after knowing she got a tumor inside her brain. Da Hye (Yu In-Young) claims she wants to get Do Young (Yoon Sang-Hyun) back from Hyun Joo and offers a job for him.

Hyun Joo is very happy and dances at hospital, but she trips while going outside. She says that she is healthy when others ask if she is ok. She bikes and laughs and says that I’m sorry towards strangers. Do Young reads the architectural agreement that Young Geun brought and reveals he is interested in it. Young Geun tells him that Connie Shin will come with him during the day he signs the contract, and claims she is Asian Regional Manager.

Hyun Joo orders Korean beef from market. Hee Joon is excited and thinks JQ won’t play a trick in the contract as they are global enterprise. Do Young still cannot believe JQ chose him. Hyun Joo orders a bottle of wine and asks Do Young to come home early. He accepts and claims their hard time is over when she reveals she spent a lot.

Hyun Joo tears up and says that thank you to save me while biking. Do Young asks if it’s diamond when ordering ring, salesgirl is embarrassed and reveals it is just 0.6ct. He used all of his credit cards to order the ring. Jin Tae asks to Hyun Joo if it’s special day after seeing the table outside while she is cutting foods.

Hyun Joo reveals Do Young wants to have barbecue outside and asks Saet Byul to come down helping her, telling his father that she is fine after seeing doctor. Jin Tae thinks those people are nasty when she mentions they think she might get a cancer and comforts his daughter.

Jin Tae asks Saet Byul to wear red clothes and teach him how to use smartphone after she came down. Hyun Joo laughs and reveals she will leave some for her. Saet Byul tells Jin Tae that she wants barbecue when they are outside and agrees when grandpa mentions pizza.

Hyun Joo lets Do Young guess and reveals it’s their 11th wedding anniversary when he doesn’t get it. He takes out a gift from his pocket and gives it to her, feeling sorry that he can only buy her earrings. She tears up and leans on his shoulder, revealing that she saw doctor and fears she gets cancer inside her brain just like her mother.

Hong Sook tells Hyun Joo that she ran into Da Hye who sneered at her, Hyun Joo cannot believe it and reveals she lives in US over 10 years. Hong Sook adds that she is pretty and mentions she seduced her husband. Just then Hyun Joo gets a call from hospital, the nurse asks her to come back to hospital tomorrow.

Da Hye has a meet with Hyun Joo and thinks she steal Do Young, Hyun Joo is upset and is going to leave. But Da Hye claims she will get him back. Do Young lies in bed with Hyun Joo and is curious why JQ chose him, she thinks her husband deserve it and asks why he married her since he loved Da Hye. He claims he doesn’t miss her while staying with Hyun Joo, but she doesn’t believe what he said.

Hyun Joo thinks Do Young doesn’t have right suit, he claims he just signs the contract. Jin Tae asks his daughter what’s the matter after seeing she looking back while seeing her husband off. Hyun Joo yells at him and tears up that there is nothing wrong.

Hyun Joo is scared and collapsed in the elevator when nurse asks her to get off, saying that she knows this place. Nurse reports to Suk Joon that the patient went to the washroom. But he thinks she fled. Hence nurse has to look for Hyun Joo.

Young Geun introduces Do Young as Korean Gaudi in front of reporters when he takes Hee Joo appearing at JQ’s press conference. Hyun Joo sits outside the doctor’s office when nurse find her, Suk Joon asks her to take a MRI and reveals she can only live for three months if it’s a tumor. She lost her temper and left even if nurse claims Suk Joon can cure her.

Do Young has a meet with Connie Shin after press conference, she asks him that if she met before. Hee Joon is excited because Do Young is going to sign the contract and has a drink with him. Do Young tells Hyun Joo that he met Da Hye at JQ and thinks she set up the contract for him. She persuades her husband to sign it and go back her room locking up the door.

Hyun Joo recalls Da Hye told her that she wanted to take Do Young back, Saet Byeol reveals there is a man outside. Hyun Joo is shocked after seeing Suk Joon visiting her. He claims he wants to save her and asks if she wants to live. She admits she wants to live.