This is the recap for K-Drama Lost: Episode 1. Kang-Jae and Min-Ji arrive at the hotel. She hugs him from his back after she sent a message to her daughter. They walk into the room. But he shows the time to her after she took off her shoes. 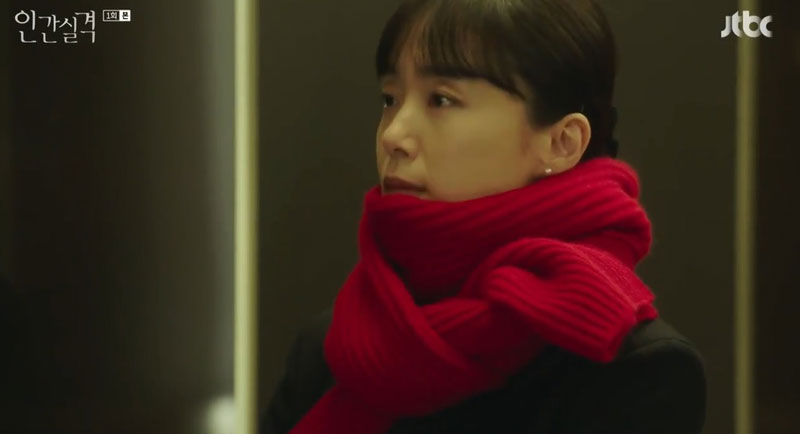 Note: From here on out there are specific plot spoilers for K-Drama Lost: Episode 1.

Kang-Jae tries to leave. But Min-Ji stops him and leaves a gift to him. He lies in the bed and closes his eyes after she left. He wakes up and finds out that the gift is a handkerchief. Ddak-Yi calls Kang-Jae when he cries. Kang-Jae tells Ddak-Yi that he encountered Jung-Woo in his dream. He reveals he cried.

Kang-Jae goes outside. He takes a photo of the handkerchief. He gets a message from Yoon-Hee who wants to see him. He takes a taxi. Ddak-Yi calls Kang-Jae and tells him that Jung-Woo drove his car to rush into the river with a woman. He adds that they passed away. Min-Jung wakes Kang-Jae up.

Bu-Jung takes a bath and leaves the bathroom. She gets into the elevator. Kang-Jae takes Min-Jung to the hotel. He only allows her to order water. She orders green tea for him because it’s free. Bu-Jung cleans up the house when the lady falls asleep. Kang-Jae asks Min-Jung for pretending to be his girlfriend.

Bu-Jung spots the expensive bag. She tries to take a look at inside. The lady Ji-Na shows up. She startles her. She asks her for leaving because she has a visitor. The two women show up. Kang-Jae introduces Min-Jung to them as his girlfriend. The old woman reports to the waiter that there’s a resident doing clean job in the hotel. Bu-Jung shows up. She ignores the old lay and walks away.

Min-Ja reports to Jung-Soo that Bu-Jung isn’t at her office. He tells her that he cannot take care of the case because he’s busy. Joon-Hyuk finds Jung-Soo and tells him that the nail customer visited him. Jung-Soo goes to see the nail customer who tells him not to get the female employees to paint their nails red.

Soon-Kyu calls Ddak-Yi and asks him for going home. But he rejects it. Kang-Jae tells Ddak-Yi to be nice to Soon-Kyu because he worries that he will take Jung-Woo’s path. Ddak-Yi thinks Jung-Woo’s mom will hold the funeral if he has a mom.

Kang-Jae takes a look at the belt in the bag. He remembers he and Jung-Woo were happy when they wore the belt. He blames Jung-Woo’s father and sister because they didn’t come to see him. Ddak-Yi praises Kang-Jae. Jung-Soo tries to open the door of his house. But he fails. The guard tells Jung-Soo to smash the door. But they need a hammer.

The kid tells Jung-Soo that she can provide the hammer to him. But the guard stops her because their parents aren’t at home. Min-Ja opens the door. She tells Jung-Soo that she did nothing to his wife. He follows her to walk into the room. She hands over the paper piece to him, and reports to him that Bu-Jung yelled at her after she opened her letter.

Jung-Soo tells Min-Ja not to visit the house again. She’s furious to beat him. He pushes her into the room. He opens the door of another room, and spots Bu-Jung sitting on the floor when she plays her phone. She tells him that his mom called her bad woman. He walks into the room and asks her why the police needs to see her. He tries to read the paper piece. She takes away the paper piece for preventing him from reading it.

Bu-Jung tells Jung-Soo that she said that she wants to kill the celebrity. She thinks he cannot understand it, and tells him that she can deal with it herself. She tries to leave the house because she wants to see her father. He tells her not to go because he thinks it’s too late. But she thinks her leaving is a good thing. He puts their shoes together after she left.

Bu-Jung runs into the mother and the daughter at the bus stop. She smiles after the little girl greeted her. She gets into the house. Jung-Soo has dinner with his mom when they watch TV. Bu-Jung visits Chang-Sook and opens the door. He’s happy to see her but he feels regret because his son-in-law doesn’t come.

Bu-Jung thinks Chang-Sook doesn’t eat. She takes out the Chinese food menu and tells him to order something. But he worries that she will waste some money. She tells him that she got herself some cashes. Kang-Jae shows up at Jung-Woo’s funeral. The woman passes by. She asks Kang-Jae if he needs her help. He rejects it so that she walks away. Ddak-Yi laughs and thinks Kang-Jae should get the woman to be his client.

Kang-Jae feels sad for Jung-Woo. He tears up and wears the sunglasses when he walks. Bu-Jung runs into Kang-Jae when she walks Chang-Sook. He ignores her when she greets him. She complains to her father that the guy didn’t greet him. He explains that the guys in the city don’t do that. He tells her to be good to her husband.

Bu-Jung tells Chang-Sook that she’s going to resign. He stops her because he thinks it won’t be easy to find a new job. He tells her to take the bus. But she rejects it because she thinks she has time. He feels relieved after knowing she didn’t have a fight with Jung-Soo. He goes to pick up the box. She tells him that she wants to do the job like him. But he’s against it because he thinks his kids should have a better job than him.

Bu-Jung agrees to what Chang-Sook said. She smiles. Bu-Jung cries and tells Chang-Sook that she worries that she will fail. She leans her head on his shoulder. Kang-Jae spots it. Chang-Sook calls Jung-Soo. He tells him that his wife just got into the house. Jung-Soo apologizes to Chang-Sook.

Bu-Jung cries in the bus. Kang-Jae hands over the handkerchief to her. She uses it to wipe her snivel. But he tells her not to throw it away because it’s expensive. She grabs his sleeve when he’s going to get off the bus. He takes a look at her face.