This is the Recap & Ending for K-Drama School 2021: Episode 3. Ji-Won goes to the rooftop. She doesn’t find anyone so that she has a seat and begins to study. Young-Joo rushes to the rooftop and takes a look at the car downstairs. He picks up the flowerpot and throws it to the car. 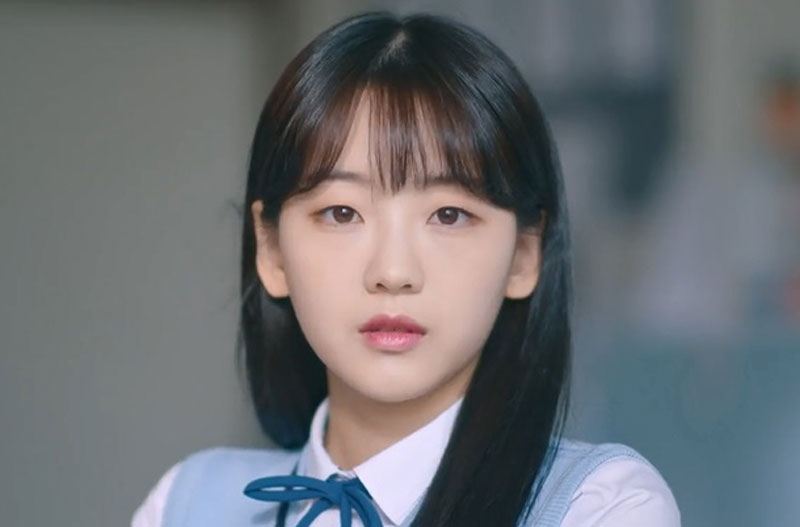 Note: From here on out there are specific plot spoilers for K-Drama School 2021: Episode 3.

Seo-Young tells Young-Joo to be her boyfriend but he walks away. Ji-Won mistakes that Min-Seo jumped off the rooftop. She tries to call her but she doesn’t pick up her phone. She goes to look for her. Mi-Hee wals outside and finds out that her car got ruined. She tells the teachers to go to look for the criminal.

Chae-Rin walks in the classroom. She notes that some of the students aren’t in the classroom. She tells the criminal to confess it to her if he broke Mi-Hee’s car. Seo-Young takes a look at Young-Joo. Ji-Won rushes to Min-Seo’s house. She knocks at the door. But nobody replies her. She runs away after she thought about the place Min-Seo stays.

Ki-Joon follows Ji-Won. Seo-Young runs into Kang-Hoon on the stairs and greets him. But he runs away. She’s confused. Kang-Hoon walks into the meeting room. Mi-Hee and the shareholders are waiting for him. Han-Soo introduces Kang-Hoon as an outstanding teacher. Kang-Hoon acts to be obedience. Mi-Hee is very happy.

Min-Seo walks alone the beach. Young-Joo sees her when he rides motorcycle. Kang-Hoon walks out of the meeting room with the teachers. Seo-Young is waiting for him. She gives the poster to him and asks him for organizing the club. He tries to reject her. But Mi-Hee thinks it’s a good idea after she remembered Seo-Young is a top student.

Han-Soo takes a look at the poster. He tells Seo-Young to form the club with Jae-Hee and Jae-Hyeok. Mi-Hee walks out of the building. She sees her broken car. Han-Soo notes that she’s not happy. He promises to send the car to get repaired. But she tells him to let the car stay there drawing the criminal’s attention. She leaves after she got in the taxi.

Kang-Hoon gets a call from someone and takes a look at his watch. He runs away. Kang-Hoon runs into Chae-Rin. He gives the note to her and reveals Ji-Won asked him to do that. Chae-Rin calls Ji-Won who tells her that they’re looking for Min-Seo.

Ji-Won runs. She remembers Min-Seo helped her work when she was out of breath because of running. The two went to watch the sunset. Ji-Won arrives at the place where she watched the sunset with Min-Seo. But she’s not there. She cries because she worries about her friend. Min-Seo cries as well at another place.

Han-Soo thinks Min-Seo is too weak after knowing she needs to rest for some days to get back to school. Chae-Rin talks back that Min-Seo is still a child. Mi-Hee shows up. She tells people that she agrees to what Chae-Rin said. She asks Chae-Rin for taking care of Min-Seo. She praises her after knowing she wants to look into the boss who hurt Min-Seo.

Mi-Hee tells the teachers that she’s going to sue the student if he doesn’t confess. She returns to the office and thinks about what Chae-Rin said. She thinks the woman is very sly. She gets a call from Byung-Chul who tells her that Chae-Rin was rude to him. He tells her that he wants to come to the school for the compensation.

Mi-Hee throws a fit to Byung-Chul and hangs up. Kang-Hoon waits for Chae-Rin and asks about the note. He feels relieved after knowing Min-Seo is fine. He thinks he should be nice to Mi-Hee after Chae-Rin told him that Mi-Hee intends to sue the student.

Chae-Rin tells Kang-Hoon not to leak their relationship. She runs away and gets into the classroom. She tells the student to confess and reveals Mi-Hee wants to deal with him. Young-Joo watches the footage which shows that he threw the flowerpot. He has an eye contact with Seo-Young.

Seo-Young tells Young-Joo that she won’t report him if he agrees to be her boyfriend. She adds that she doesn’t want to get tangled by those guys. He agrees to it and shakes hands with her. Min-Seo sits outside. Ji-Won cheers Min-Seo up and brings the drinks to her.

But Min-Seo points out that she knows Ji-Won likes Ki-Joon as well. It makes Ji-Won nervous. Seo-Young runs into Ki-Joon on the street. She walks away. Seo-Young walks alone the street and remembers Young-Joo rejected her when she asked him for dating her.

Seo-Young sees the panda dancing on the street. She walks away. She doesn’t know the panda stares at her back. The panda takes off her doll. School 2021 indicates that the person is Eun-Bi. Eun-Bi remembers Seo-Young saw her. She’s furious to beat the doll.

Seo-Young shows up. She learns that Eun-Bi isn’t a trainee anymore, telling her to get back to the school if she doesn’t have any business. Ji-Won and Min-Seo walk into the school. The classmates join them and show something to them.

Min-Seo waves to Ki-Joon after she saw him. Ji-Won ignores Ki-Joon. Ki-Joon is confused. Ho-Sung shows up behind Ki-Joon. He asks him which girl he likes. He shows Young-Joo and Seo-Young’s group photo to him. Ki-Joon sees the couple walking into the classroom. He’s upset.

Seo-Young tells the classmates that she’s going to form the club. She tells them that she will give the money to the members. Ji-Won and Ki-Joon join the club. Han-Soo goes to the rooftop and takes a look at the broken car. He sighs and finds something.

Ki-Joon joins Young-Joo. He wants to ask him about the relationship of him and Seo-Young. But Young-Joo walks away. Ki-Joon gets a call from Ji-Won who tells him that Han-Soo wants to see them. Ki-Joon goes to Han-Soo’s office with Ji-Won and Ho-Sung.

Han-Soo shows the doll to the students. Ki-Joon admits that the doll belongs to him. Han-Soo tells Ki-Joon that he needs to leave the school.