This is the Recap & Ending for The Law Cafe K-Drama: Episode 1. Yoo-Ri wins the case after she showed the evidence to the judge. She introduces herself as a lawyer. The assistant begs her not to wear leopard print clothes because he worries that she will leave a bad impression to the judge. But she rejects it.

How Does Yoo-Ri Open a Law Cafe? 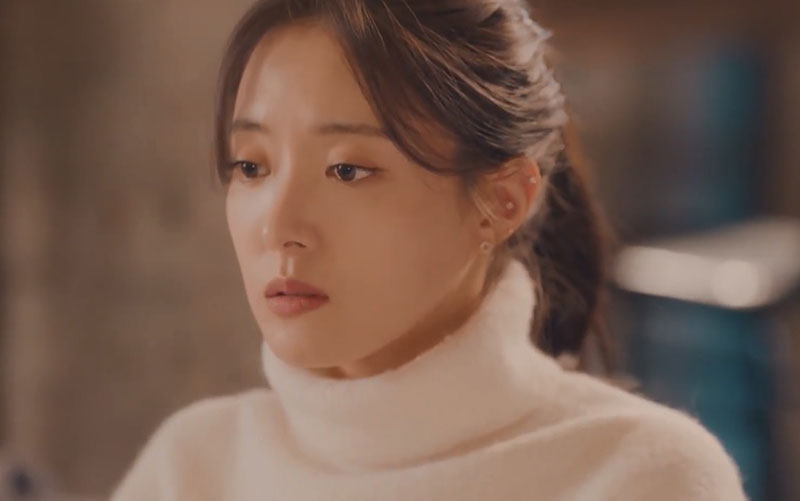 Note: From here on out there are specific plot spoilers for The Law Cafe K-Drama: Episode 1.

Yoo-Ri walks into the office. The colleagues welcome her. She’s surprised to look at CEO Hong. He praises her for winning the cases for the company. He cries to tell her that she’s going to leave. He takes her to the restaurant to see Assemblyman Yoon.

Assemblyman Yoon thinks Yoo-Ri is pretty. He shakes hands with her. He reveals he’s looking for a spokesperson when she eats. CEO Hong asks Yoo-Ri what she’s going to do. She puts a big food into her mouth. She tells the two that she’s going to open a cafe.

Yoo-Ri walks through the cherry blossom trees. The real estate agent takes Yoo-Ri to see the house. Yoo-Ri likes the house very much. She rents the place. Yoo-Ri tells CEO Hong that she will help the people who orders coffee from her cafe do trials.

The door is opened. The bride Se-Yeon is happy to walk to groom Jin-Ki. But he cries. Yoo-Ri tells Law Cafe that Jin-Ki is such an emotional guy. She laughs. She cries to tell Jin-Ki that she wishes to be friends with him after he gets married. She sees Jung-Ho so that she chases him. But he walks away.

Yoo-Ri tells Law Cafe that she and Jung-Ho were friends. But he disappeared. She thinks he doesn’t want to see her. Jung-Ho is swimming in the pool on the rooftop. The madam shows up. She tells Jung-Ho and his dog to come down to eat.

Jung-Ho introduces himself as a writer. He feeds the dog and goes to eat. The madam Cheon-Daek thinks Jung-Ho should find the job. Mrs. Choi disagrees to what Cheon-Daek said. She points out that Jung-Ho owns two buildings. But Jung-Ho blames Mrs. Choi for adding too much salt into the food.

Cheon-Daek takes away Jung-Ho’s food. He takes the food back. He tells Mrs. Choi that she will get many diseases when she’s aged. She’s startled, thinking he’s very smart. She waves at Woo-Jin when she sees him. It makes him trip.

Woo-Jin hands over the food to Mrs. Choi. Cheon-Daek tells Jung-Ho to bring food next time. But he eats the food Woo-Jin brought. She blames him for doing so because he’s younger than them. He points out that they’re friends. Mrs. Choi laughs to agree to what Jung-Ho said.

Jung-Ho tells Law Cafe that he’s the leader of the group. Mrs. Choi mentions the lady who runs the cafe is very beautiful. But Cheon-Daek thinks Yoo-Ri won’t stay too long. Jung-Ho tells Cheon-Daek not to spread the bad rumor. He worries that he cannot pay the loan if Yoo-Ri leaves.

Yoo-Ri hears weird sound when she’s cleaning the floor. She’s startled to give up her broom. She gets a call from someone. She walks out of her cafe. Woo-Jin passes by. He’s lost when he sees Yoo-Ri walking to him. Jung-Ho hands over the water bottle to Woo-Jin. But he sees Yoo-Ri. She recognizes him.

Why Doesn’t Jung-Ho Wish Yoo-Ri to Open a Law Cafe?

Yoo-Ri meets with Jung-Ho in the real estate agent’s office. The real estate agent is surprised that the two knew each other before. Yoo-Ri reveals she has known Jung-Ho since high school. She asks him when he didn’t greet her and leave in the wedding.

Jung-Ho claims that he’s very busy. It makes the real estate agent laugh. She reveals Jung-Ho has stayed at home to write novel. Yoo-Ri laughs. Jung-Ho scolds Yoo-Ri for resigning. She points out that he doesn’t have a job as well. He tells her that he won’t rent the house to her. He tries to leave.

Yoo-Ri follows Jung-Ho to the rooftop. He believes that she will overwork again. She yells at him and tells her that it’s not his business. She tells him not to worry about her because she has a plan. But he still doesn’t want to rent the house to her.

Yoo-Ri asks Jung-Ho if he does it because they were in love. He laughs to deny it. She tells him to sue her if he wants to end the deal. She’s furious to leave the rooftop. Yoo-Ri laughs when she asks herself if she still has feelings for Jung-Ho. She tells Law Cafe why Jung-Ho avoided her.

Yoo-Ri puts her hand on Jung-Ho’s head. She asks him what job he wants to do since he has a good memory. He puts his hand on her head as well. He asks her the same question. They smile when they stare at each other. Yoo-Ri and Jung-Ho smiles when they water the grassland.

Se-Yeon grabs the nozzle from Yoo-Ri when she chases Jin-Ki. She attacks Jin-Ki with the water. Yoo-Ri and Jung-Ho join the battle. Yoo-Ri stops Jung-Ho. She asks him out since everyone thinks they’re in love. He agrees to it. They see the falling cherry blossoms. Yoo-Ri and Jung-Ho begin the date. They’re very happy. But he breaks up with her.

Yoo-Ri walks out of the bathroom. She tells Se-Yeon that she thinks Jung-Ho avoided her because he dislikes her. She complains that the guy didn’t told them that he bought the house since they’re friends. Jung-Ho lies on the couch to have a talk with Jin-Ki over the phone.

Jung-Ho asks Jin-Ki to play game with him. Jin-Ki rejects it because he needs to stay with Se-Yeon. He reveals Yoo-Ri called Se-Yeon. He thinks the girl called because of Jung-Ho. He smiles to bring the fruits to Se-Yeon. Jung-Ho touches his dog. He tells him that Yoo-Ri is a terrible woman.

Jung-Ho receives the paper from Yoo-Ri. He calls her and asks her if she wants to fight with him when she drives. She tells him that she will talk about it at the court. He tells her to rent other houses. But she rejects it and hangs up.

Yoo-Ri sees CEO Hong falls asleep when he sits on the chair. He wakes up and thinks she doesn’t have to work for the case because she has resigned. But she doesn’t want to give up. He reveals the president of the motor company has taken action. He wonders why Yoo-Ri has to open a Law Cafe. Yoo-Ri pours herself a cup of tea. She tells us that she opened the Law Cafe to help people because she knows life will pass away easily.

It flashes back. Yoo-Ri walks Se-Yeon when she talks with her. She turns around and sees the news that warehouse is on fire. The drinks drop. Yoo-Ri arrives at the hospital. She wants to see her father. But her mom stops her when the doctor tries to save her father. Yoo-Ri cries with her mom.

Yoo-Ri reveals her father became a criminal after the witness told the judge that he drank when he worked. Jung-Ho takes a look at the paper. He decides to fight with Yoo-Ri at the court. She visits him and uses his bathroom. She walks out of the bathroom and lies on his couch.

Yoo-Ri asks Jung-Ho why he doesn’t want her to rent his house. She asks him if he dislikes her. He denies it. She takes out the wine from her bag for making him tell her the truth. But he’s furious to kick her out. He hurts her hand when he drives her out of his house.

Jung-Ho tells Yoo-Ri that he doesn’t want her to drink in his house because she’s a woman. She accepts the explanation and walks away. Jung-Ho remembers Yoo-Ri asked him if he dislikes her. He gets a call from her who tells him that she left the paper in his house last night.

Yoo-Ri tells Jung-Ho to watch the trial. She takes off the leaf from his hair. He tries to leave. But he has a seat. It makes her smile. Yoo-Ri drank with the chief. She begged him to be the witness. Yoo-Ri walks to Jung-Ho after the trial. He asks her to explain it to him.

Yoo-Ri tells Jung-Ho that she wanted to let him know what she has done. She thinks he wants to stop her because he worries that she will take his path. She promises only to give law suggestion. He doesn’t believe that she will only do so. She offers to set some rules.

Jung-Ho completes the contract after he worked hard for one night. He’s happy to go to see Yoo-Ri. He throws the papers to the table. She takes a look at the papers. She’s furious to throw away the papers. She drinks up the water. She thinks he hasn’t changed. Jung-Ho remembers he avoided Yoo-Ri when she chased him. She walked away after she didn’t find him. He confesses that he avoided her because he has feelings for her.