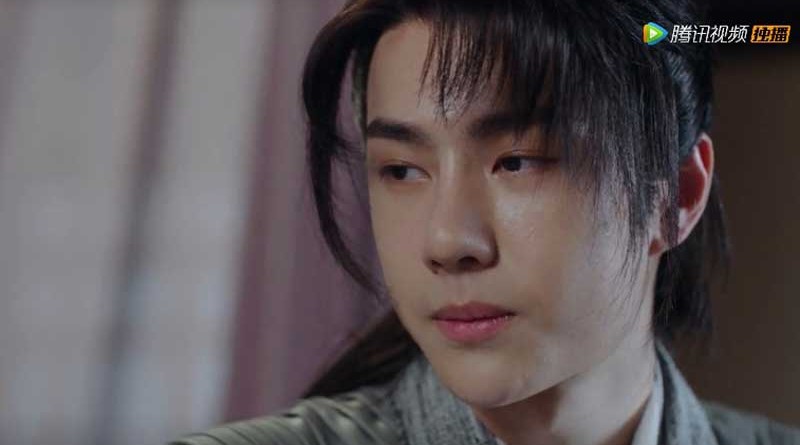 This is the recap for Legend of Fei Chinese Drama: Episode 7. Zhou Fei is drunk to put her head on Xie Yun’s shoulder. He carries her to the bed to let her sleep, and tries to take away the wood blade from her neck. But he gives up the mind and visits the weapon shop. 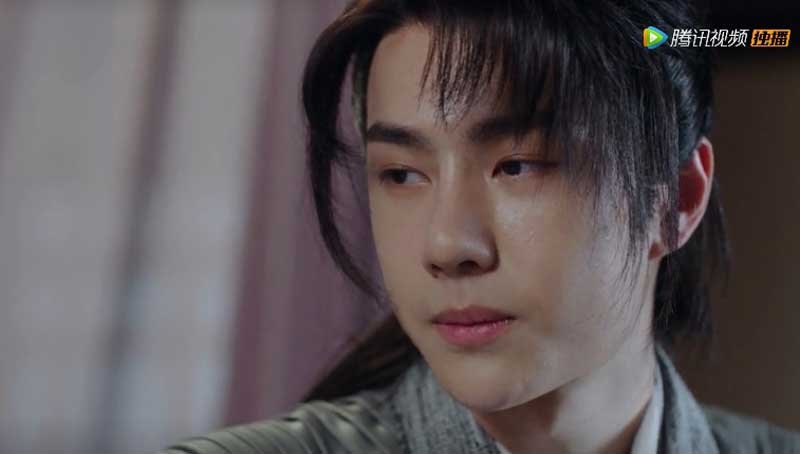 Note: From here on out there are specific plot spoilers for Legend of Fei Chinese Drama: Episode 7.

Xie Yun tells the shop owner that he wants to buy a blade and gives it to a girl. The shop owner laughs and thinks Xie Yun won’t get the girl’s heart because girls like rouges. But Xie Yun points out that the girl likes blade. The shop owner goes to take blade.

Zhou Fei wonders what she did last night. Wu Chuchu visits Zhou Fei and tells her that she has a stomachache. Zhou Fei decides to take Wu Chuchu to see a doctor, and takes away her blade. The two try to walk downstairs. But Zhang Chenfei stops them and asks them what they want to do. Wu Chuchu says that they want to go out to walk around.

Shen Tianshu puts the leaf on his arm. He is surprised that the person behind Huo Liantao is the third prince Chen Zichen. The follower runs to report to Shen Tianshu that Chou Tianjin took action. Xie Yun sees an eagle flying in the sky. He thinks it’s Chou Tianjin. He goes out to take a look. He sees some masked men walking round the street.

The shop owner asks Xie Yun if he wants his blade because he is going to close his shop. He buys the blade and runs to the hotel. But he runs into Mr. Bai. Zhou Fei and Wu Chuchu arrive at the hotel. They find out that the hotel is burnt up. Wu Chuchu worries about her brother. But Zhou Fei takes Wu Chuchu to hide because there’re so many guards.

Lord Zhu shows up and scolds Chou Tianjin for doing that. Chou Tianjin shows the jade pendant to Lord Zhu, and borrows the bodyguards from him. Wu Chuchu spots the waiter getting the money from the follower of Chou Tianjin. She asks Zhou Fei if the waiter is their friend. Zhou Fei is surprised that the waiter betrayed them.

Shen Tianshu arrives and scolds Chou Tianjin for doing so. Chou Tianjin explains that he just wanted to prevent Wu family from fleeing. Shen Tianshu tells his follower to close the city gate. Chu Chu sees the bodyguards carrying the corpses out. She cries.

Zhou Fei hugs Wu Chuchu to comfort her. She realizes what her mom guards and why her father wanted to go downhill. The follower reports to Chou Tianjin that Wu Chuchu and Wu Xiaodi fled. Chou Tianjin tells the follower to search for the city.

Zhou Fei learns that Chou Tianjin wants to search for the city. She doesn’t know where she should hide. Wu Chuchu tells Zhou Fei to hide in Lord Zhu’s palace. Zhou Fei agrees to it and tells Wu Chuchu to hide in the bamboo basket. She tells her not to go out no matter what happens. She adds that she wants to go to take a look what Di Sha’s doing.

Zhou Fei tells Wu Chuchu that she will escort her to 48 Villages even if she’s alone. Wu Chuchu grabs Zhou Fei’s hand and tells her to be careful. The masked man walks in the alley and opens the bamboo basket. He spots Wu Chuchu. Zhou Fei catches the chance to kill the masked man.

Zhou Fei learns what Shen Tianshu and Chou Tianjin look for are different persons. She picks up Wu Chuchu and tells her to wear the masked man’s clothes. She adds that there’s no guard at the backyard of Lord Zhu’s palace. But Wu Chuchu worries that she cannot pretend to be the masked man. She thinks she cannot sneak into the palace. But Zhou Fei tells Wu Chuchu that they will attack the palace.

Mr. Bai take Xie Yun to see Chen Zichen. Xie Yun asks Chen Zichen for some bodyguards to save his friends. But Chen Zichen stops Xie Yun and tells Mr. Bai to go to look into the hotel. The follower reports to Chou Tianjin that their men were killed and taken away the clothes.

Mr. Bai reports to Xie Yun that the hotel was burnt up by Chou Tianjin. He gives him the stuff he found at the hotel. Xie Yun spots the jade pendant, and remembers Zhang Chenfei gave it to Zhou Fei. Mr. Bai tells Xie Yun that Di Sha is looking for the person who killed their men. Xie Yun realizes that there is a sword master which Di Sha didn’t expect.