This is the Recap & Ending for Disney Plus K-Drama Snowdrop: Episode 6. Soo-Ho shoots the lights and throws the smoke bombs to the enemies. He steps back to the tunnel with his followers. The students are scared after they heard the gunshot. They begin to flee. 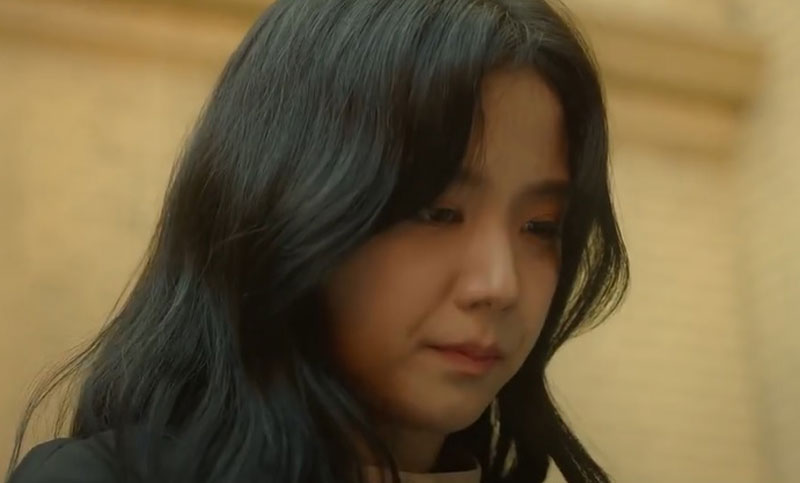 Note: From here on out there are specific plot spoilers for Disney Plus K-Drama Snowdrop: Episode 6.

But Gyeok-Chan comes back with the gun. Gang-Mu tries to fight with Gyeok-Chan. But he gets defeated. Soo-Ho stops Gyeok-Chan before he kills Gang-Mu. Gang-Mu is locked up in the room. The follower reports to Chang-Su that I-Seop got killed on the fishing boat.

Soo-Ho notes that Yeong-Ro is injured. He tells her to take the Medicine Kit to follow him. He wants to treat her wound after he treated Eung-Cheol’s wound. But she doesn’t want him to touch her. He takes away the Medicine Kit from her and dresses her hand.

Soo-Ho tells Yeong-Ro that it’s the repaying she took care of him those days. She returns to the cafeteria. The students see the bandages on her hand, realizing that Yeong-Ro got taken care of. They mock her. Soo-Ho gets a call from Chang-Su who explained to Soo-Ho that I-Seop got killed.

Chang-Su tells Soo-Ho that he didn’t have the time to inform the north about shooting the spy. He tells him that he doesn’t wish to see the thing, promising to send him to the north. Soo-Ho reminds Chang-Su that the hostages will die with them if he breaks his promise.

Soo-Ryun reports to Ji-Rok that the plan failed. She adds that the money was gone because of Soo-Ho’s mistake. She doesn’t believe that Soo-Ho will take the money back, thinking Ji-Rok will get the punishment. Gyeok-Chan tells Soo-Ho to die with the hostages because they’re soldiers who come from North Korea.

But Soo-Ho wants to be alive to return to North Korea to take the duty. Gyeok-Chan thinks Soo-Ho insulted revolution spirit. He tells him that he doesn’t believe him, and reveals Soo-Ryun told him to kill Soo-Ho if he betrays their nation.

Chang-Su doesn’t have the time to arrange the doctor. Tae-Il calls Chung-Ya and tells her to come to see him. He tells her to kill the two spies instead of saving their lives. He adds that the police will rush into the dormitory to kill the last spy.

But Chung-Ya tells Tae-Il that she cannot do that because she’s a doctor. He hugs her and promises to abandon his wife if he comes the president. He adds that he will stay with her all his life. She agrees to add the sleeping pills into the medicine. He smiles.

Soo-Ho asks Seung-Hee for the list of the students. Seung-Hee tells the students that the girls who come from 207 room will get released. Bun-Ok is against it. She throws a fit and thinks the workers who are like her have the right to be alive.

Seung-Hee knows Bun-Ok is a poor child. She asked Soo-Ho for letting Bun-Ok leave. But Bun-Ok ruined the chance. Soo-Ho tears up Bun-Ok’s resume, telling her that he won’t release her. He tells the people that only he has the right to decide who’s going to get released. He adds that all of people who are against him won’t get released.

Chang-Su bugs the talk. He worries about Yeong-Ro after knowing she gave up the chance to leave the dormitory. He tells Soo-Ho that he will send an envoy to get into the dormitory with Chung-Ya. Han-Na gives the gun to Chung-Ya and tells her to put it into the medical supplies. She tells her to hand it over to Gang-Mu.

Han-Na follows Chung-Ya to get into the dormitory. Gyeok-Chan checks the medical box. He doesn’t find the gun. Han-Na asks Gyeok-Chan where the hostages are. Gang-Mu hears her voice. Chung-Ya is taken to treat Eung-Cheol. She has an eye contact with Soo-Ho after she saw him.

Han-Na asks Soo-Ho about the hostages he’s going to release. He tells the people about the list of the students who can leave the dormitory. Yeong-Ro is in the list again. The girl cannot breathe. Seung-Hee asks Soo-Ho for releasing the girl.

The students begin to pretend to be sick after they heard what Seung-Hee said. Yeong-Ro yells at them to stop the disturbances. She cries to tell Soo-Ho that he doesn’t have the qualifications to decide the life and death of others.

Yeong-Ro tells Soo-Ho to release all of people. She tells him that she will stay at the dormitory. She reveals she’s the daughter of Chang-Su. She thinks he can run away from the dormitory if he keeps her.