“Sweet Teeth” is a new Chinese romance drama which comes out in 2021. The drama tells a story about a girl Zeng Li falls for her dentist. 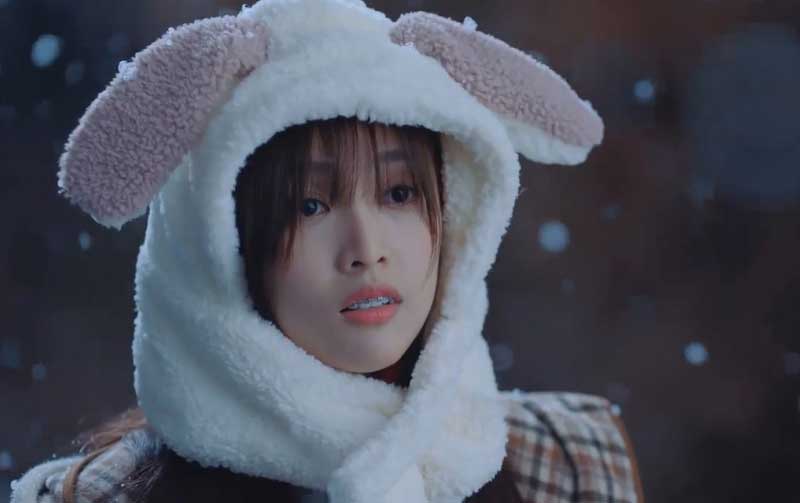 Zeng Li and her colleague talking about the handsome doctor Ai Jingchu. She spits water to him when he stands in front of her. He uses the book to block the water. He leaves after he got the book. She worries that he heard what she said.

Ma Yiyi hands over the tissue to the crying girl. She tells her that it means breakup when a man wants to calm down. The girl complains to Ma Yiyi that her boyfriend tells her that he has a business when she visits him. Zeng Li tells the girl to dump the man.

The girl Dou Dou runs out of the cafe. She bumps Wu Ying. Wu Ying walks into the cafe and tells Ma Yiyi that she had been tortured for one night. Ma Yiyi is excited. She wants to hear Wu Ying’s story. Wu Ying tells Ma Yiyi that the guy cried to hold her hand when she worked.

Zeng Li points out that Dou Dou broke up. Ma Yiyi wonders who is the guy. Wu Ying reveals it’s Ai Jingchu. Zeng Li spits water. She wonders why she always drinks water when she mentions the man. Ma Yiyi thinks Ai Jingchu flirts with other girls when he’s in love with Dou Dou. She asks if the man is handsome.

Wu Ying reveals there were many girls having feelings for Ai Jingchu. She adds that she didn’t like him at all. So Zeng Li asks Wu Ying who she had feelings for. But Wu Ying refuses to confess.

Zeng Li returns home. She’s surprised that her mom wears cheongsam when she cooks. Madam Zeng asks Zeng Li why she didn’t drink the pig feet soup she cooked. Zeng Li explains that she was busy. Madam Zeng reminds Zeng Li that she cannot get herself a boyfriend if she doesn’t improve her face.

Zeng Li promises to drink the pig feet soup to be beautiful. Madam Zeng thinks the Moon God forgot her daughter when he made marriages. Because Zeng Li still doesn’t have a boyfriend. Madam Zeng reminds Zeng Li that she will be 26 years old. She worries that she cannot compete with those young girls.

Madam Zeng takes a look at Zeng Li. She wonders why she cannot get herself a lover because she’s still beautiful. She notes that Zeng Li’s tooth aren’t good when she bites the apple. She intends to take her to see a dentist.

She’s a beautiful librarian who doesn’t have a boyfriend.

Zeng Li refuses to improve her tooth when Madam Zeng drags her. She thinks she shouldn’t do that because she’s not young. She spots Dou Dou talking with Ai Jingchu. She thinks the man is heartless after Ai Jingchu made Dou Dou cry.

The guy thanks Ai Jingchu for helping him persuade Dou Dou. Ai Jingchu tells the guy to explain it to the girl. The doctor tells Zeng Li to come tomorrow after he saw her tooth. Madam Zeng decides to accompany Zeng Li to the hospital because she worries that she won’t come.

The old woman hugs Zeng Li and tells her that she hurt her leg. Zeng Li wants to call the police. The old woman passes out. Ai Jingchu shows up and wakes the old woman up. He takes off the leaf from Zeng Li’s hair. He places the leaf on her palm.

Zeng Li walks at the street. She thinks she had a bad luck. She finds out that she stepped the chewing gum. She tries to get into the bus after she got rid of the chewing gum. But she gets kicked out. It’s raining. She runs to the bus stop. The little girl calls Zeng Li aunt, and reminds her that her bus card dropped.

Ai Jingchu holds the umbrella for Zeng Li when she’s picking the bus card. He apologizes to her because he thinks he wronged her. She tells him that she forgives him because she thinks he came to apologize to her. But he tells her that he just passed up. He hands over the umbrella to her and walks away. She wonders why he refused to drive her home since he didn’t know where her house is. She thinks he’s not sincerity. She blames the heaven for giving her the bad luck.

Zeng Li tells her mom that her mouth has air leak when she speaks. She worries that it will be always like that. Madam Zeng comforts Zeng Li that she will be fine after the tooth get together.

Madam Zeng tells Zeng Li to close the cafe because she thinks it doesn’t make money. Zeng Li tells Madam Zeng that the cafe is her dream. Madam Zeng points out that Zeng Li’s classmates are elites now. Zeng Li claims that it’s iron bowl. Madam Zeng thinks the young people don’t care for it. She scolds Zeng Li for not having a boyfriend.

Zeng Li blames Madam Zeng for mentioning it. She tells her to leave. Dou Dou calls Zeng Li and asks her for going to the classroom for her. Zeng Li walks into the classroom. She finds out that the teacher is Ai Jingchu. Ai Jingchu explains that he replaced Teacher Wang because the guy is sick.

Ai Jingchu calls Dou Dou. He asks Zeng Li to stand up and takes off her cap. She’s embarrassed and tries to leave the classroom. But he stops her and tells her to study well. He tells her to get back to her seat.

Wu Ying takes the guy to the East Lake University. He tells her that he remembered her face when she tries to leave. Little Aunt pinches Ai Jingchu’s face after seeing him. He tells her to change the habit because he worries that the students will see it.

Little Aunt agrees to what Ai Jingchu said. She thinks he won’t have girlfriend if girls see it. Ai Jingchu tells Little Aunt there’re only students in the school. Little Aunt introduces the guy Liu Yucheng to Ai Jingchu. She asks him to take care of the boy.

Ai Jingchu walks Zeng Li to the hotel. She asks him why he doesn’t return to his room. He tells her that he needs to return to the Rehabilitation Center. She wears her coat on him, and asks him for waiting for her. But he leaves after she took the stuff from her room.

Zeng Li walks out of the hotel to look for Ai Jingchu. She begins to run when she’s thinking of monster. Someone grabs Zeng Li’s arm. She’s startled to tell the person to leave. But she finds out that the person is Ai Jingchu. She puts the medicine into his pocket because she knows that he’s sick.

Zeng Li apologizes to Ai Jingchu and thinks her colleagues were too enthusiastic. He asks her if she’s the beauty of the library. She explains that the colleagues gave her the title for helping her find a boyfriend. He feels sorry for delaying her because he heard that she doesn’t have a boyfriend.

Zeng Li tells Ai Jingchu that she has many boyfriends. She adds that she almost forgot them because she just saw them once. Ai Jingchu thinks he’s the one who’s familiar with Zeng Li.

Zeng Li tells Ai Jingchu that she came for the blind date. She thinks it wasn’t a date because she doesn’t have any feeling for the guy. Ai Jingchu asks Zeng Li to tell him the movie she’s going to watch. He adds that he wants to watch movie with his friend.

Liu Yucheng is moved after knowing Ai Jingchu intends to spend his precious time to watch the movie with him. He tells him that it’s his treat. Zeng Li is surprised to see Ai Jingchu at the cinema. She introduces her friend Gu Donghai to him.

The kid Chen Chen complains to Zeng Li that his teeth is gone. She comforts him that it won’t affect his looks. He tells her that his classmate Lisa didn’t talk to him. Because she thought he spits when he talks. Zeng Li tells Chen Chen to tell Lisa that his teeth can grow up.

Chen Chen thinks Zeng Li fooled him. But Ai Jingchu tells Chen Chen what Zeng Li said is true. He tells him that he will plant the teeth for him when he’s 18 years old. But Chen Chen doesn’t want to wait it. Zeng Li tells Chen Chen that the little girls like smart boys.

Deng Haoran notes that Zeng Li and Ai Jingchu’s heads get together. He brakes and makes the two wake up. Ma Yiyi sends the photo of Sheng Ming to Zeng Li. Zeng Li learns there was one guy who agreed to have dinner with Ma Yiyi. Ma Yiyi thrills to tell Zeng Li that Sheng Ming blushed when he looked at her.

Ma Yiyi asks Sheng Ming to taste the pizza. But he tells her that he needs to leave because he has a business. He walks away.

Ma Yiyi asks Wu Ying what mistake she made. She reveals Sheng Ming keeps ignoring her. She thinks she ordered too many dishes because Sheng Ming is a normal employee. Zeng Li tells Ma Yiyi to give up the guy. But Ma Yiyi says that she keeps thinking of Sheng Ming.

Zeng Li is drunk to kiss Ai Jingchu. She falls asleep on him. He holds the coffee because he doesn’t want to wake her up. Liu Yucheng calls Wu Ying and reminds her that it’s time to sleep. But she rejects it because she kept getting defeated in the game. She calls him older brother, and begs him to take her to play the game.

Zeng Li wakes up and finds out that she slept on the couch. She wonders where Ai Jingchu went. She spots the note he wrote. It tells her to drink the honey water.