The commander of Wei kingdom Gong Sun Yu is on his way with his 2th apprentice Jing Ke and granddaughter Gong Sun Li in the dark night. They arrives Daliang city and find a restaurant at the end. 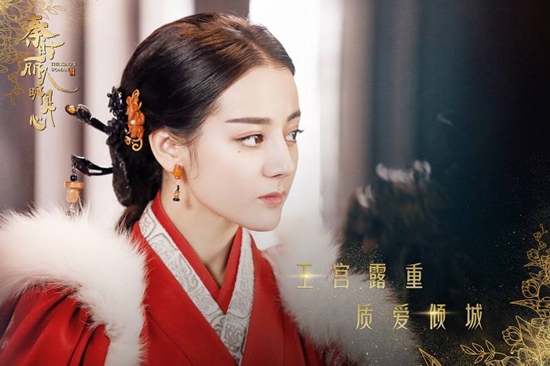 Gong Sun Li (Dilraba Dilmurat) says, “The Qin kingdom wants to eat all of the kingdoms since he defeated the six kingdom union. The Qin kingdom’s minister Lü Buwei is a evil man. He lets King Zhuang of Qin to alienate Lord Xinling and King An Xi, so that he can weaken Wei kingdom. Then he supports Queen Dowager Huayang’s son Ying Zheng as king of Qin to enhance his power. Gai Nie doesn’t want to associate with them, so he left.”

Jing Ke (Liu Chang) admires her after hearing her analyzing of current political situation. Gong Sun Li accepts it. She will join army and fight for her country just like her grandfather if she isn’t a female.

A arrow is broken the sky and shot a deer at the hunting ground in western hill of Qin kingdom. Ying Zheng wears blue clothes with red cloak. He lets retinue take the prey with smiling. However, the retinue is stopped by Lord Changxin Lao Ai’s henchman Zuo Yi. Zuo Yi claims each prey should be handed over to Lord Changxin. Because there is a rule in western hill. Ying Zheng’s henchman Li Zhong thinks it’s ridiculous after hearing what Zuo Yi said. Li Zhong says: “Do you know who is the king of Qin kingdom?” Zuo Yi claims it’s a rule and mentions Queen Dowager Zhao.

Ying Zheng’s smiling disappeared. He is the king of Qin kingdom. However, he is controlled by others.

Queen Dowager Zhao and Lao Ai is waked up by a bloody deer head. This is what Ying Zheng gave them. If you want it, I will give you. However, can you accepts it?

Gong Sun Yu, Jing Ke and Gong Sun Li visited Gai Nie in Yuan Young city. They wants to convince him to deal with Qin kingdom. Gai Nei gives them a offer. He can accepts their invitation if they stop him outside the city. Gai Nei is the 1st sword master. They failed at the end. When they are going to leave, The commander of Qin army Meng Wu is out of city with his army. He is going to attack Pu Yang city. As The commander of Pu Yang city, Gong Sun Yu has to back it. He lets his 2th apprentice Jing Ke protect Gong Sun Li. Gong Sun Li doesn’t agree it.

Nao Ai plots rebellion in Qin kingdom and claims Ying Zheng is bastardly. After Ying Zheng hears Nao Ai’s rebellion message, he calls together his army and defeated Nao Ai’s army. However, Nao Ai runs away. Ying Zhen holds the bloody sword and points to Queen Dowager Zhao. Fortunately, Lü Buwei arrives and stop him to kill his mother. Ying Zheng is softhearted at last. He only deprives her queen position and banishes her.

Ying Zheng takes out an handkerchief from his chest. It was given to cure wound by Gong Sun Li after he fell from cliff when they were children. At that time, they wished upon a star. Gong Sun Li hoped everybody are ok! Ying Zheng hoped everyone afraid of him so that he can protect someone he wants to protect.

Gongsun yu takes Jing Ke and Gongsun Li to arrive at the restaurant. Jing Ke asks Gongsun Yu why Ge Nie wanted to leave since he is the man of Qin Kingdom. Gongsun Yu tells Jing Ke that the current Qin Kingdom is like a mad beast. He adds that the Qin Kingdom wants to eat other six kingdoms after Su Qin’s plan fails.

Gongsun Yu says that Lv Buwei did it for expanding her political power. He thinks Ge Nie left Qin Kingdom because he didn’t want to be a friend of Lv Buwei. Gongsun Yu remembers what her grandpa said that Wen Kingdom went to Qin Kingdom for being against vertical kingdoms. But they were ruined by Da Wei, and became their dependency.

Gongsun Yu mentions Qin King got their king to move to Yewang Yi, and they’re contained by Qin Kingdom. Gongsun Li says that Lv Buwei set a goal to rule the world, and the war doesn’t end. She adds that the people don’t know they’re going to be killed. She thinks the nation and families will be ruined if the six kingdoms don’t unite with each other.