Song Jia Ming (Mao Xiao Tong) cleans room and changes the bed for Li Yu Zhe (D’Angelo Mike). However, he still refuses the invitation and drives her away. 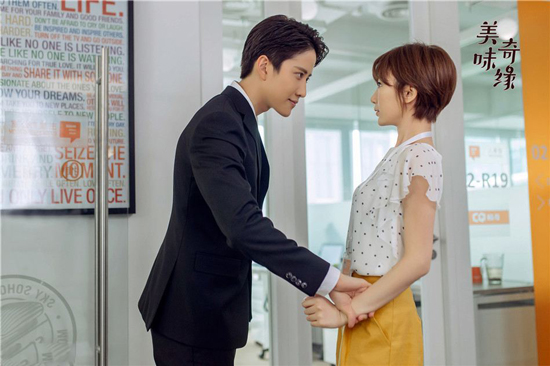 As Li Jian Guo set up several buildings, his cash flow is very tight. He asks president Liu in the local bank for help. However, president Liu refused it. His wife will be back with his daughter Li Yu Xi. She hopes he can pick them. Because Jian Jian Guo is in cash flow trouble, he lets them take taxi themselves. At this time, Ye Yi Lan is going to pick her grandmother Jiang Xiu Yun.

When Song Jia Ming enters into Li Yu Zhe’s office, he runs away from the back door. He goes to airport to pick his mother and young sister Li Yu Xi. Li Jian Guo doesn’t pick his wife and daughter, however he welcomes Jiang Xiu Yun with beautiful flowers at the airport. To his surprise, she is allergic to flowers. Ye Yi Lan’s stepmother fetches Jiang Xiu Yun her shawl. Jiang Xiu Yun refuses it also. After she left, Song Jian Guo transfers the flowers to his wife.

Li Jian Guo meets Thai boy Kun Jin at the airport. He looks for his father from Thailand. However, his pocket is stolen after he stepped off the plane. Li Jian Guo’s wife give the Tai boy 500 yuan immediately.

Li Yu Zhe thinks Song Jian Ming doesn’t know what means of food, she isn’t qualified to talk about food with him. Song Jia Ming doesn’t agree it. He serves a great dish lobster soup to her and lets her read the ingredients of the food in 24 hours. Song Jia Ming hasn’t read the ingredient after drinking the soup. She enters into the storage room and looks for the recipe. Li Yu Zhe catches her in the storage room. At this time, he gets a stomach ache. She massages his hand to cure the stomach ache. He lets her tells him the ingredients of the soup next day.

Ye Yi Lan’s stepmother got a box of ginseng. She let her son Ye Yi Xuan gives it to Jiang Xiu Yun for getting a good job from her. However, Jiang Xiu Yun only gives him a normal job and warns Ye Yi Lan that she should be careful of her stepmother.

Aunt Wu finds Kun Jin at the street corner. He spent his 500 yuan and gets lost. Aunt Wu doesn’t believe what he says and throws away the carton which is Kun Jin’s bed. At this time, Song Jia Ming happens to pass. She invites Kun Jin to her father’s snack shop and rents a room for him.

Song Jia Ming complaints what Yi Yu Zhe has done on her to her father Song De Zhong. Song De Zhong explains importance of the ingredient in food. She gets the point and believes she can read it.

Boss Zhou has promised to attend cocktail party with Lucy for advertisers. However, Lucy refuses it. Song Jia Ming volunteers to replace her.

Jiang Xiu Yun wants to bring Li Yu Zhe and Ye Yi Lan (Chen Xin Yu). So she lets them attend the cocktail. When Li Yu Zhe appears in the party, he finds a group of males is going to urge Song Jia Ming to drink. They claims they will advertise if she can invite Li Yu Zhe successfully. Song Jia Ming falsely claims Li Yu Zhe already agreed her invitation. Those men jokes that she musts be exchanging it with her body. Li Yu Zhe exposes her lies and spills red wine on her breast.